The rise of 3D printing has made a different kind of manufacturing possible. Instead of parts being built in a dozen or more locations around the globe, then shipped to a final destination to be assembled, digital information is compiled and transmitted to any location with the capability to receive the data. Not only does this paradigm shift save companies money in shipping, it also makes it possible to set up end-use manufacturing shops around the globe.

One of the biggest winners from this new brand of manufacturing is the construction of prosthetics. Additive manufacturing (AM) not only makes building prosthetics far less expensive than older techniques, but also allows the devices to be put together wherever AM can be set up. Charitable organizations have taken this opportunity to begin setting up 3D printing workshops in rural Africa. 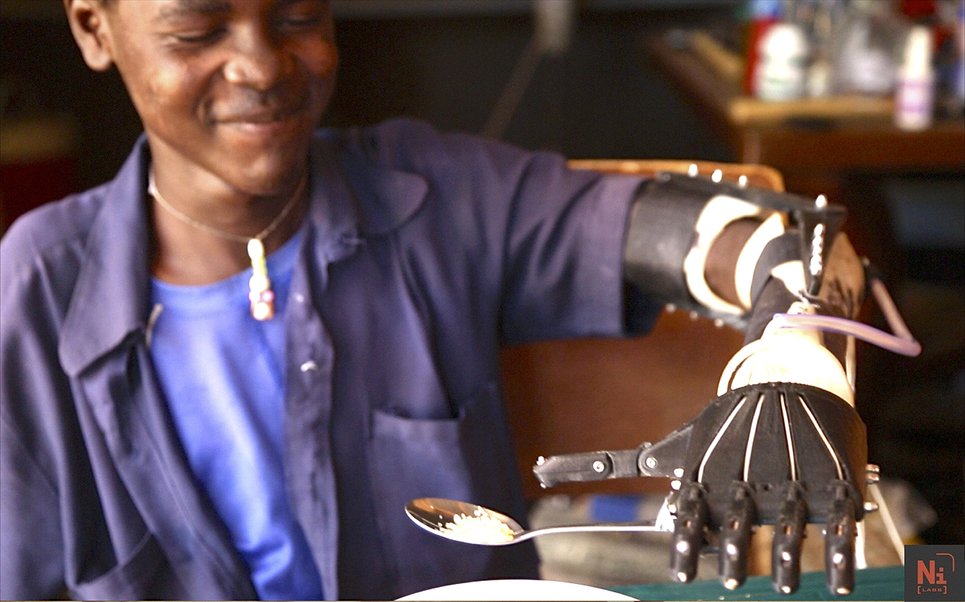 Not Impossible Labs (NiL) and Project Daniel were founded by Mick Ebeling and Elliot Kotek after hearing about a Sudanese boy named Daniel that lost both his arms to bombs. Daniel was unable to feed himself, and felt like a burden to his family until NiL visited him at his home and helped set up a digital manufacturing lab.

Using 3D scanning, Daniel’s measurements were taken and a low-cost arm and hand prosthetic design was altered to fit. The prosthetic was then printed out and assembled at the South Sudan site. Since assembling a new arm for Daniel, other Sudanese amputees have come to the manufacturing lab looking for help. So far, the lab has created arms for four other patients at a cost of around $100 for each prosthetic.

The University of Toronto (U of T) has also reached out to people in need of prosthetics in Uganda. Partnering with an NGO and Ugandan hospital, U of T has set up a system whereby 3D scans of patients are digitally sent to the university, and fully developed prosthetic designs are returned. This process helps patients in areas of Uganda where prosthetic technicians are in short supply.

“The major issue with prosthetics in the developing world is not access to the materials of prosthetics; it is access to the expert knowledge required to form and create them,” says Matt Ratto, a professor in the Faculty of Information. “We’re lacking prosthetic technicians, not prosthetics themselves.”

Below you’ll find a video about Project Daniel.