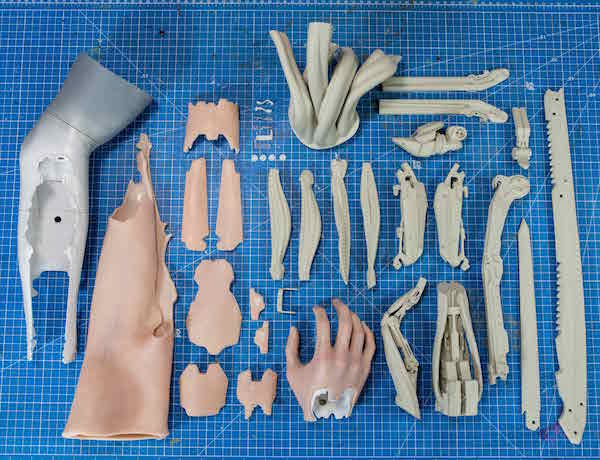 Lightning Cosplay uses Zortax 3D printers such as a desktop M200 and a resin Inkspire to create costumes and accessories. Image courtesy of Zortax.

The company was formed by Laura and Ralf Zimmermann in 2012, and now does work for globally recognized producers of computer games such as Bethesda, THQ Nordic or CD Projekt.

“Most of our projects are created on commission of game producers who want to 'revive' their virtual heroes during promotional events. First of all, we receive and analyze numerous screenshots of a particular character to determine how its outfit presents at different angles,” says Ralf Zimmermann. “Afterwards we begin 3D modeling of the full costume. Once we know its complete appearance, the individual details that will allow us to achieve the desired result can be finally worked on.”

The team uses Zortrax 3D printers to implement their projects. Initially, the company used the M200 printer and later supplemented the studio's equipment with a resin Inkspire printer. According to the company, the new printer has revolutionized their work, allowing the creation of elements with the final height of less than 2 cm measured with a precision of 0.025 mm for each layer height.

“Before we started using 3D printers, we cut out the elements of our costumes of foam or formed them from thermoplastic materials. Sometimes we still use such solutions. You don't need a 3D printer to create fancy costumes. You can play and design without this technology,” Zimmermann says. “However, if amateur creation of artifacts and costumes becomes treated as a business, you will need to use the right equipment. With tight deadlines and demanding customers, an accurate and precise printer, such as Zortrax Inkspire, improves the design process greatly and allows us to achieve better results.”

You can view more photos of the company's work by clicking on the photos at right, or viewing the slideshow here.