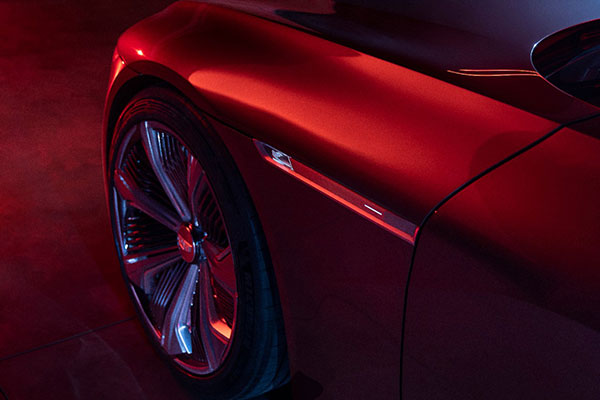 General Motors’ Cadillac CELESTIQ will include more than 100 3D printed production parts, the most of any GM vehicle.
Image courtesy of General Motors.

The $2 million Czinger 21C hypercar turns heads for various reasons: its dramatic designs, luxury appointments and its ability to crank from 0 to 62 mph in just under 1.9 seconds, as a few examples. The specialty car also stands out for the novel approach to its design and production.

Fueled by over 500 patent filings and an in-house developed hardware and software stack, Czinger is looking to upend traditional automotive production with a digital manufacturing approach designed around artificial intelligence-driven automation and additive manufacturing.

DAPS, which encompasses generative design, optimization software and metal additive manufacturing (AM) capabilities, optimizes a part to meet the right weight, strength and cost characteristics, automatically 3D print it, and ready it for a fixtureless assembly cell.

This is a novel approach designed to create more efficient vehicle structures in less time while transforming the CapEx-heavy models of traditional automotive manufacturing, says Lukas Czinger, co-founder of Czinger Automotive and senior vice president of operations at Divergent Manufacturing. 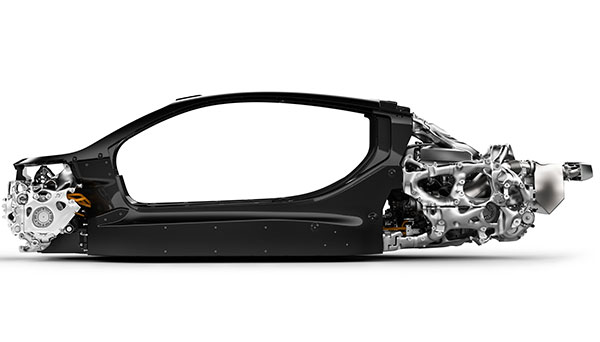 Metal 3D printing is at the heart of automotive startup Czinger’s digital manufacturing strategy to commercialize its 21C hypercar. Image courtesy of Czinger.

Though DAPS is central to the Czinger 21C business model, it’s also being test driven in active production programs with third-party automotive original equipment manufacturers (OEMs), Czinger says. DAPS’ holistic process approach to automotive manufacturing is the only viable way to expand use of AM from a tool for early-concept design and prototyping to a legitimate option for full-scale production.

“An end-to-end system is the only way you’re going to advance 3D printing from prototype into mass production,” Czinger says. “You need the right design software, materials, printing hardware and assembly system to make an entire automotive chassis. You need to design for AM [additive manufacturing] and design for assembly as part of the early process.”

Thanks to advances in materials and printer throughput and performance, AM technologies are finally gaining traction in the automotive sector for production of end-use parts. Allied Market Research is projecting the global automotive 3D printing market to grow at a compound annual growth rate of 23.7%, blossoming from $1.6 billion in 2020 to $13 billion in 2030.

As the automotive industry scales up capacity for direct parts production, a report from SmarTech Analysis anticipates revenue opportunities for polymer AM in North America and Europe to account for $2.7 billion by 2030.

For specialty car startups like Czinger, architecting novel production processes that leverage AM is a direct route toward advancing more innovative and bespoke vehicles that can go to market far more quickly than with conventional automotive manufacturing practices. Yet even established OEMs are steering toward integrating AM into existing car programs as well as to fuel their next-generation vehicle production.

“There are multiple tipping points that happen to be tipping into each other,” says Fadi Abro, director of automotive business, Americas, for Stratasys. “The throughput from AM continues to go up while the cost per part continues to come down so the likelihood that you can take a part and have it make economic sense to produce with AM has gone up.”

Another factor at play is that automakers are starting to diversify their portfolios with low-volume, high-margin vehicles as well as ramp up their embrace of customization.

“All these trends tilt in favor of AM,” Abro says. “Now you have all these different part versions that have to accommodate certain vehicle versions, which would typically require different hard tools, different inspection methods and different inventory plans. With AM, you can go right to printing from CAD, enabling the freedom of just-in-time manufacturing.”

A Flurry of Activity

A simple canvas of major automotive players confirms that AM has branched out considerably from its early days of parts prototyping. Consumers’ ongoing interest in customization—for example, adding individually speced seats or bevels—is a driver for many OEMs’ AM programs, including Ford, which has deployed an autonomous robot on its production line to 3D print end-use parts, including custom accessories for its Mustang Shelby GT500 sports car. Ford is also allowing customers to 3D print accessories for its Maverick pickup truck through a set of open-source CAD files.

Porsche is leveraging 3D printing and lattice design to drive customization of its vehicles, including a program that lets customers tailor seats with specific firmness levels; eventually, the program will be expanded to allow customers to specify color and contour.

More widespread use of AM for production parts is also happening on a functional design level as well as for production tooling. Bentley has significantly ramped up its investment in 3D printing, producing a record 15,000 components in 2021, including manufacturing assisted tooling as well as parts for the Bentley models that drove the Pikes Peak Challenge in America race.

Bentley’s investment in a state-of-the-art, 24/7 AM facility has translated into a 50% cost savings on parts and the ability to produce thousands of components in over 25 different material options, officials said. The company said it is actively training engineers in AM practices so they can identify new opportunities to integrate AM into existing processes to bolster efficiencies and design innovation.

Bentley parent company Volkswagen Group is also quite active advancing production-scale 3D printing for both metal and plastic components. The firm has partnered with Siemens AG for its digital manufacturing and 3D printing process solutions and HP for its binder jetting AM technology. To date, the OEM has produced prototype plastic components such as center consoles, instrument panels and bumpers along with printed metal components like manifolds and brackets.

On the racing front, NASCAR has been lapping mainstream OEMs in its use of AM and, more recently, 3D printed production parts. Through a partnership with Stratasys Direct Manufacturing, NASCAR 3D printed a windshield air cockpit ventilation unit for its Next Gen car; it also designed and 3D printed an underside NACA duct for engine cooling at its own facility using the Stratasys Fortus 450mc 3D printer. 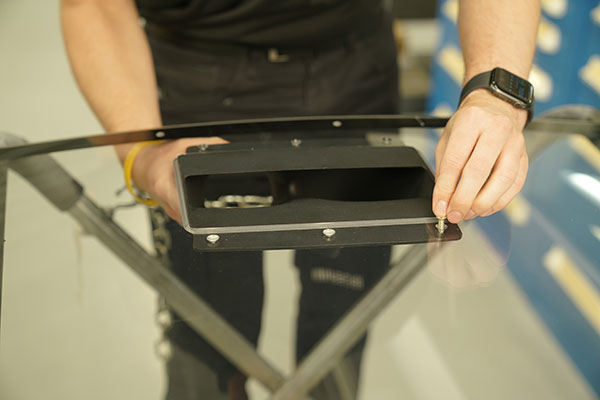 NASCAR has teamed up with Stratasys to 3D print production parts like windshield air vents and underside NACA ducts for its Next Gen cars. Image courtesy of NASCAR.

General Motors, which has invested heavily in AM, including its Additive Industrialization Center that opened up on its GM Global Technical Center campus in 2020, sees AM as a critical lever for innovation, according to Ali Shabbir, additive design and manufacturing product application engineer.

Building on the back of the Cadillac CT4-V and CT5-V programs, which boosted the first AM-produced parts, including the shifter emblem, transmission components and HVAC ducts, GM is pushing ahead with the CELESTIQ, its hand-built, luxury electric vehicle, which will feature more than 100 3D printed parts and will be produced with 3D-printed tooling. Though company officials declined to detail specific parts, they said the AM bill of materials will include structural and cosmetic parts as well as polymer and metal pieces.

Though AM is essential for design freedom and competitive advantage, GM doesn’t anticipate the need to build an entire vehicle offering around AM-produced parts.

“For us, AM is another tool in the toolbox,” Shabbir says. “We leverage the right technology where it makes sense. That’s the key to sustainable use of AM—it’s not meant to be a panacea for everything, but rather to complement and expand our product capabilities.”

AM has also become a critical tool for combating supply chain challenges. Earlier this year, a last-minute change to the Tahoe 2022 design called for a flexible “spoiler closeout seal” that would have taken months to produce with traditional tooling, delaying delivery of 30,000 cars. GM partnered with GKN Additive Forecast 3D to create the seal parts in just 5 weeks, less than half the time it would have taken with traditional methods.

“A traditional solution would not have been able to meet our timing goals to deliver the product,” Shabbir explains. “AM provided a solution to bridge the gap.”

Integrating AM into Existing Processes

Whether AM serves as a stop-gap solution or a long-term production practice, the automotive sector faces a number of challenges as they integrate 3D printing into their overall manufacturing plans. One of the biggest obstacles is creating processes and practices for validating and testing 3D printed production parts, which isn’t as simple as translating existing processes to a new paradigm.

“If you need 3,000 of a particular part and you’ve already done testing and planning for that component for injection molding, you can’t just swap to a new production method without extensive validation,” says Stratasys’ Abro. “It’s not as simple as flipping a switch.”

Recalibrating accounting practices to determine what makes economic sense to produce with AM technologies is another long-standing hurdle to widespread adoption, according to Steve Tengler, principal at Kugler Maag Cie, a global automotive consultancy. Companies can be deterred from use of AM because of what’s perceived as a high cost per part; however, the math can change significantly if they factor in costs related to things like inventory, storage costs, even R&D.

“Many don’t have a good sense of how AM can be beneficial and an AM part ends up looking more expensive compared to a traditional production part,” Tengler explains. “But there are all sorts of costs that aren’t considered as part of that evaluation.”

In the end, it will take a concentrated effort on process integration and continuous training to ensure the automotive sector maximizes the potential for production-scale AM, especially for mainstream vehicles as opposed to where it’s mostly deployed now, for specialty, short-run vehicle projects. Often, OEMs have AM experts exploring the technology and evolving processes in their AM Centers of Excellence (COE), but the expertise doesn’t transcend to the design engineers.

“The people at the OEMs doing AM day in and day out are thinking about it, but the person designing the part may not understand so AM gets left on the cutting room floor,” notes John Walker, government relations & key account manager at EOS North America.

As materials advance, 3D printer performance improves and OEMs become open to new processes architected specifically to exploit AM’s value, Walker expects a new round of production-grade parts use cases that will have a multiplier effect on increased adoption.