If Velocity Micro is unfamiliar, it is likely because the company is the outgrowth of a business started in 1992 by a techie and entrepreneur who began assembling custom computer systems to run CAD and other demanding applications. Today, this Richmond, VA-based system integrator assembles systems such as workstations for a wide range of uses including gaming, home, office, home theater and even driving simulation. 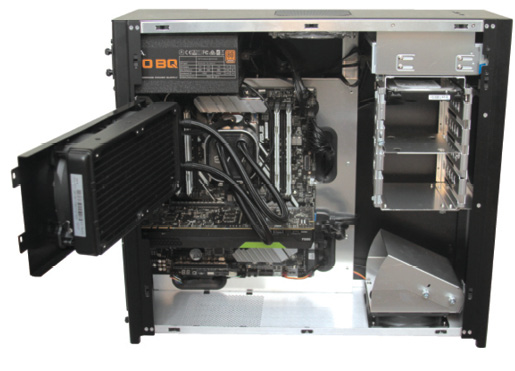 The interior of the case is spacious, but users must swing the cooling radiator out of the way to access the CPU and memory sockets. Image courtesy of David Cohn.

The company recently sent us its ProMagix HD80A, a large workstation packed with some of the latest technologies, including an AMD Ryzen Threadripper CPU, making this the first Ryzen-based system we’ve reviewed. Needless to say, we were quite excited to put this system through its paces.

The Velocity Micro ProMagix HD80A came housed in a large black GX4 extended depth aluminum ATX case measuring 7.25x18.50x21.25-in. (WxDxH) and weighing 25.75 lbs. The front of the case has a round power button centered below a single drive bay and a Velocity Micro logo cutout near the bottom. Both the power button and logo illuminate. Interior case illumination is also visible through fan vents in the top and left side of the case. A pair of USB 3.0 ports plus microphone and headphone jacks are located on the top of the case.

When turned on, the case did little to reduce the sound of the system, which registered a constant 48dB. Although not the loudest system we’ve ever tested, the fan noise was quite noticeable against the otherwise 29dB ambient sound level in our lab.

The rear of the case provides nine additional USB 3.0 ports, a single USB 3.1 Type-C connector, one RJ-45 LAN port for the integrated Intel gigabit LAN, a S/PDIF port and five audio jacks. The left side panel, held in place with six snap connectors, takes very little effort to remove. Inside, we found a well-organized, spacious interior with five internal drive bays, one of which was filled. We removed a large piece of foam packing material from the inside of the case before powering up for the first time.

On its website, Velocity Micro lists a starting price of $1,999 for the ProMagix HD80. But the company sells HD80 systems based on Intel and AMD processors. The “A” suffix denotes this as an AMD-based system, and those cost more, with prices starting at $2,599 (less a $150 online discount). The ProMagix HD80A is built around the ASUS PRIME X399-A motherboard, which provides eight dual-inline memory module (DIMM) sockets, supporting a maximum of 128GB of error correction code (ECC) or non-ECC unbuffered memory modules. The base HD80A configuration includes 16GB of DDR4-2400MHz RAM (4x4GB). Our system came with 32GB, installed using four 8GB Crucial Ballistix memory modules, which added $220 to the system price. 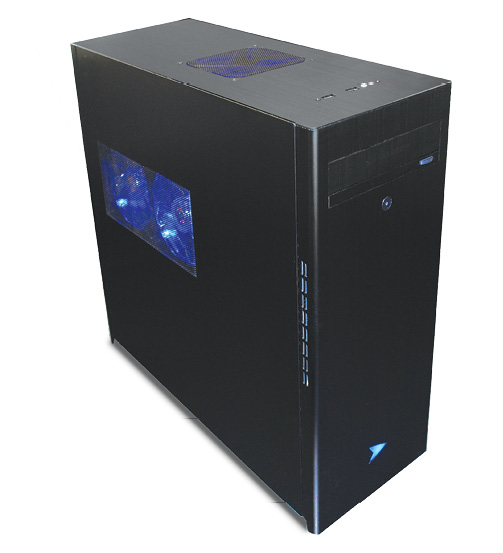 The Velocity Micro ProMagix HD80A is a powerful workstation based on an AMD Ryzen Threadripper CPU. Image courtesy of Velocity Micro.

All three CPUs use a pair of quad-core complexes combined into each of the two Zeppelin dies inside the Ryzen processor. In the 1920X, AMD disables four of those cores. Although the less-expensive versions have fewer active cores, all three feature four DDR4 memory channels and 64 PCIe lanes. All three also have a maximum boost frequency of 4.0GHz—a 4.2GHz extended frequency range when paired with a robust CPU cooler—and a 180-watt thermal design power rating.

Although all Velocity Micro ProMagix HD80A systems include an EVGA closed-loop liquid cooling system, our evaluation unit included one with optional blue lighted fans, adding $65. The base system also includes a 750-watt EVGA SuperNOVA 80Plus Bronze certified power supply. Power supplies of up to 1,300 watts are available for those planning for maximum expansion. 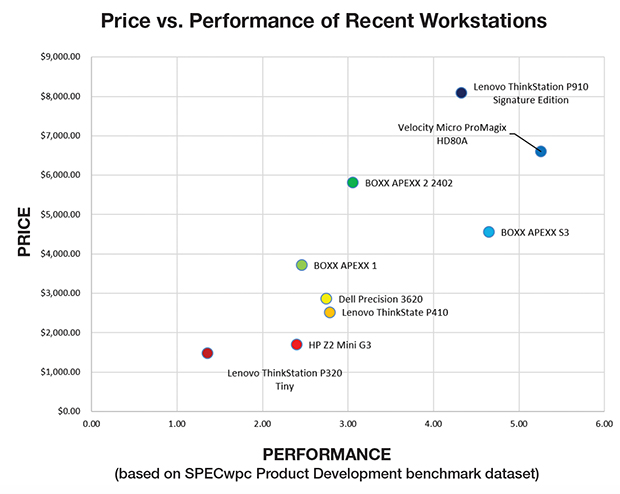 Buy It or Build It?

We often wonder whether it makes sense to have someone like Velocity Micro assemble the system or if it’s a better deal to buy the components and build it yourself. Here’s what we came up with for the ProMagix HD80A:

That means that if one were to purchase the parts and build it on their own, it’s possible to save around $2,300. Of course, that assumes the builder has the requisite skill, confidence and time to do it on their own. Buying a system assembled by trained technicians and backed by a warranty from a reputable company is worth some extra cost when it comes with the assurance that the system is guaranteed to work when it shows up at the door. It’s up to the buyer whether a 50% cost increase is too much.

Expansion capabilities are robust thanks to the motherboard’s six expansion slots—four PCIe 3.0/2.0 x16 slots, a PCIe 2.0 x4 slot and a PCIe 2.0 x1 slot—which are clear of the CPU cooler. The cooling unit’s large dual-fan radiator assembly must be hinged out of the way to access the CPU and memory sockets, but the expansion slots are easy to access. The lower portion of the case has its own fan, with a metal baffle directing airflow over the expansion slots. These two bottom vents also have their own removable dust filters.

The base HD80A configuration includes an NVIDIA Quadro K620 graphics processing unit (GPU) with 2GB of discrete memory. Velocity Micro offers a choice of 18 other graphics cards from AMD and NVIDIA, including the NVIDIA Quadro P5000 supplied in our evaluation unit. This high-end board, which added $2,400 to the price, includes 16GB of GDDR5X memory and features 256 compute unified device architecture (CUDA) cores, a 256-bit interface and a maximum bandwidth of 288GB/second. Since the P5000 consumes 180 watts, it requires an eight-pin auxiliary power connection, and its double width covers the adjacent PCIe 2.0 x4 slot. The GPU provides four DisplayPorts and one DVI-D port as well as 3D stereo support, although the stereo connector was provided but not installed. The P5000 has a maximum resolution of 7680x4320 at 30Hz. We ran our tests at 3840x2160 resolution, using the NVIDIA WHQL driver version 391.35 (dated 3/23/18); the driver installed when we received the system.

The base system also comes with a 256GB solid-state drive (SSD), but Velocity Micro offers 18 other choices, including SSDs of up to 2TB and standard hard drives from 1TB to 8TB. Our system came with a 512GB Samsung 960 Pro PCIe M.2 NVMe SSD, which added $340. Our evaluation unit also included a 4TB 7200rpm Seagate SATA drive ($165 extra) for data storage. A 24X ASUS DVD+/-RW dual-layer drive comes standard, installed in the front-panel drive bay. Integrated gigabit ethernet is standard, but wireless and Bluetooth capability are extra.

With its high-end components, including the very fast 12-core AMD Ryzen Threadripper CPU, we had high expectations. And indeed, the Velocity Micro ProMagix HD80A lived up to them.

On the SPECviewperf tests, the ProMagix HD80A turned in some of the best results we have ever recorded on this graphics-intensive test, with improvements ranging from 2% to as much as 47% compared to the BOXX APEXX S3 (which DE reviewed in March 2018). But on several of the other Viewperf datasets, the HD80A lagged the BOXX workstation by as much as 53%. On the SPECapc SOLIDWORKS benchmark, the Velocity Micro system performed well, but its scores placed it in the middle of the pack.

On the very demanding SPECwpc workstation performance benchmark, however, which includes six test suites representing vertical markets that often have very different computing demands, the Velocity Micro ProMagix HD80A turned in the top scores on more than half of the individual tests and ranked first for all but one of the six test suites.

With its 12 CPU cores, the HD80A averaged 34.3 seconds on the AutoCAD rendering test, a multithreaded test that shows the advantage of fast CPUs with multiple cores, less than a second slower than the BOXX APEXX S3. 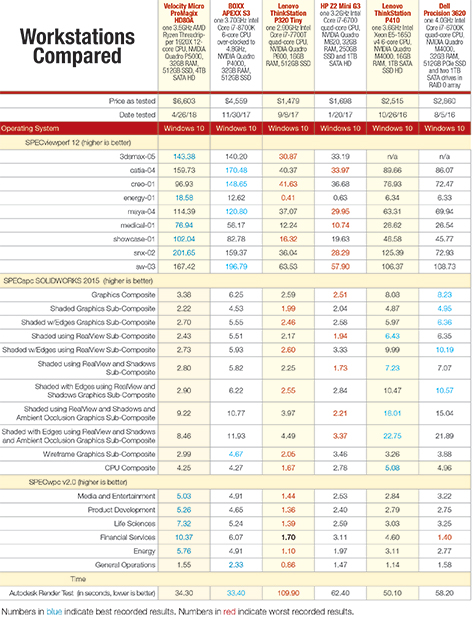 Unlike most other workstations we have tested, Velocity Micro preloads Windows 10 Home, or it’s possible to get Ubuntu Linux for the same price. Windows 10 Professional costs $70 more (which we included in our pricing to maintain consistency with our other reviews), or users save $70 by ordering the system without an OS. Velocity Micro also does not include a keyboard or mouse unless one is added to the order. Various keyboards and mice are available at the time of purchase, with prices ranging from $15 each for a basic keyboard and mouse (which we included in our pricing) to $99 for a wireless keyboard and mouse.

Most other manufacturers back their workstations with three-year warranties, but Velocity Micro only includes a one-year warranty in its base price. That warranty includes parts and labor, lifetime regular business hour support and one-year depot repair. The company does offer other options, including one year with on-site repair ($99). For consistency, we included a three-year warranty in our configuration (which added $399). Velocity Micro also provides a lifetime upgrade plan that allows the ability to return the system for maintenance upgrades and tuning.

As configured, our system priced out at $6,753, although an online discount available when we priced our configuration dropped that total by $150 (and a Velocity Micro rep told us that such specials are often available). Therefore, we used $6,603 for our price/performance chart.

That price makes the HD80A the most expensive single-socket workstation we have tested in the past six years. And as an integrator rather than an original equipment manufacturer, systems from Velocity Micro lack independent software vendor certification. Clearly, the folks at Velocity Micro knows how to assemble a high-end workstation, but while the ProMagix HD80A is a performance leader, its price places this AMD-based system in at the high end of the price/performance scale.