Academia Pitches in to Make PPE 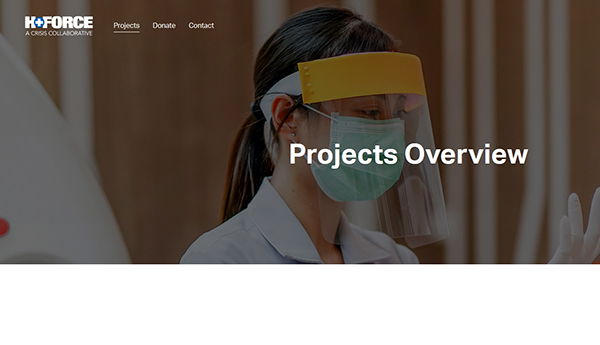 The H-force is an alliance of Houston Community College (HCC), San Jacinto College, University of Houston at Sugar Land, makerspace TX/RX Labs, and a few others to rapidly begin producing PPE.

3D Printing Trend Report 2022 Now Out
Great growth predicted for 3D printing industry—market is expected to triple by 2026.
Technology Awakening
Without a doubt, technology has shaped the world we find ourselves in, made the world...
Proceed With Optimism
Our readers and the technology providers in the engineering market have continued building on the...
Industry 4.0 Responds to the Pandemic
More organizations turn to digital twins and centralized workflows to address supply chain challenges.
More COVID–19

Industry Focus: Design for Medical Devices
In this Special Digital Issue, we take a look at how simulation software, 3D printing, and other technologies...

Schools and universities may be closed for the most part, but many with design, engineering, and manufacturing facilities are now powering up their labs, CNC machines, and 3D printers to make PPE (personal protective equipment) for doctors and nurses fighting the spread of COVID-19.

So she reached out to her colleagues and asked if Syracuse University’s 3D-printing facilities could be put to work to produce the shields.

This reached James Fathers, VPA School of Design director, and Chris Prior, the director of fabrication shops for VPA. Then Dean Michael Speaks from the School of Architecture came on board. Eventually Tim Breen, workshop and project manager at the College of Engineering and Computer Science (ECS), joined the team, as reported by the school.

The school is using Lulzbot Taz 6, Gigiabot 3+, and Zortrax M300 printers. It estimates it can produce 60 to 90 face shields per day. The first batch was scheduled for delivery on March 26.

“Everybody is interested in figuring out ways to help and I think that we're all very lucky to have the facilities and the know-how to do what we can to help,” says Prior. “I'm just grateful to be in a position where I can help.” 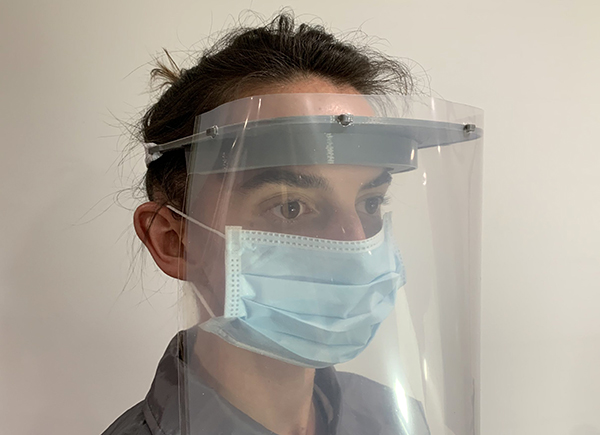 “The group is using 3D printers on campus to create components for protective face shields. After the 3D-printed headbands and other pieces are done, they will be assembled at AdventHealth’s Nicholson Center and distributed to the provider’s locations throughout Central Florida,” the school announces. 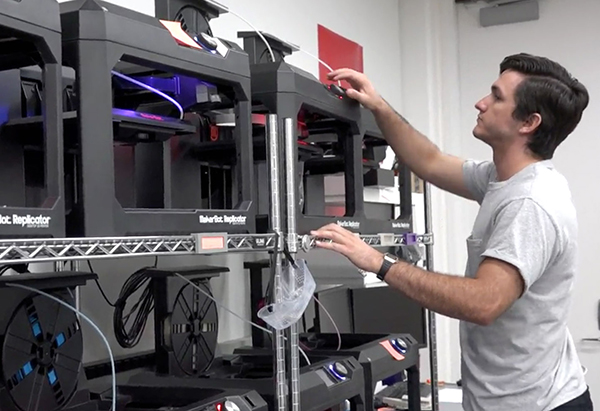 Florida Polytechnic University laboratory technician Samuel de Oliveira works on a 3D printer to create components for face shields that will be used by AdventHealth clinicians as they combat COVID-19 in Central Florida. Image courtesy of Florida Polyteechnic University.

At University of Irvine, an interdisciplinary team designed, tested, produced and delivered 5,000 face shields to the school's Medical Center staff within 17 days, the school announces.

“Medical staff tested the prototypes to ensure that health system requirements were met. Then full-scale production began at the University Lab Partners in UCI Beall Applied Innovation’s Cove. The manufacturing process included social distancing protocols and safe practices, such as one-person stations where students from the School of Medicine assembled the face shields distributed to their healthcare colleagues at the medical center,” the school explains.