Some favorite analogies for structural analysis.

An analogy is a comparison between two related concepts, usually made to help understand or remember the basic idea. This article reveals some of my favorite analogies for structural analysis.

The membrane stresses in a thin wall pressure vessel are in hoop and axial directions. Stress equations are Pr/t and Pr/(2t). P is pressure, r is radius and t is wall thickness. When doing a sanity check for an FEA (finite element analysis) result, would you rather remember which is which, or turn to a handbook or online search? My memory is bad, so I use this food analogy.

Overcooking sausages on the barbecue often results in split skins. The split is always longitudinal. The sausage is subject to the same stress state as the pressure vessel. Hoop stress is double axial stress, so the poor sausage splits longitudinally every time. A course attendee once claimed his sausages burst circumferentially, but then admitted to pricking around the sausage with a fork!

A second analogy reinforces this concept. Ready-made dough is sold in long cardboard tubes, similar to kitchen or toilet roll tubes. The tube is helically wound with the strip edges glued. The dough is stored under pressure inside the tube. One enjoyable way to get the dough out is to grab both ends and give a good twist. The tube bursts with a satisfying pop. The failure mode occurs as in the brittle material. The tensile principal stress orientated at 45° to the axis is pulling across the glue line and the weak glue fails, as sketched in figure 1. Warning: This experiment is addictive. My wife gets upset with all those exploded tubes in the refrigerator!

Remember blowing soap bubbles? As you blow into the ring the film bulges and forms a dome-like shape. Maximum curvature is at the edge. Zero curvature is at the center. Torsional shear stress is directly proportional to the soap film curvature! The mathematics are horrible, but the potential field equations are identical. Torsional shear stress in a circular cross-sectional shaft is maximum at its free edge and zero at the center. The distribution through thickness is the same as the soap film curvature. 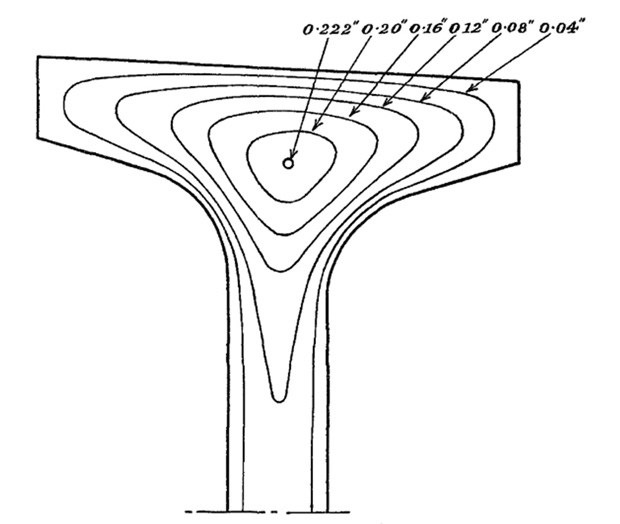 Fig. 2 shows a sketch from an early experiment. A flat plate has a hole cut out in the shape of the beam cross-sectional area. A soap film is formed across the cut out and blown from underneath. The sketch shows the contours of the soap bubble. We are interested in how closely the contour lines are spaced. Tight contours, the steeply sloping parts of the soap film, show the high shear stress regions. The high shear stresses are at the inner radii of the cross-section.

There are probably many other similar analogies that are useful for explaining or remembering structural analysis concepts. If you have any favorites, do drop me a line at [email protected] and I will include them in a future article.