Luxury car maker Aston Martin will include 3D-printed parts in its new AM-RB 003 concept car, which debuted at the Geneva Motor Show 2019 in early March.

Aston Martin worked with Red Bull Advanced Technologies on the design of the vehicle, which is the third mid-engine hypercar from the company. The vehicle was partly designed using CAD 3D modeling software, and includes 3D-printed components. The AM-RB 003, when produced, will be limited to 500 worldwide.

According to Aston Martin, the interior of the vehicle includes a number of printed parts. Primarily, the center console is a printed piece that now has 50% less mass than it would using traditional manufacturing methods. The center console has actually been widened compared to the company’s previous hypercar (the Valkyrie). 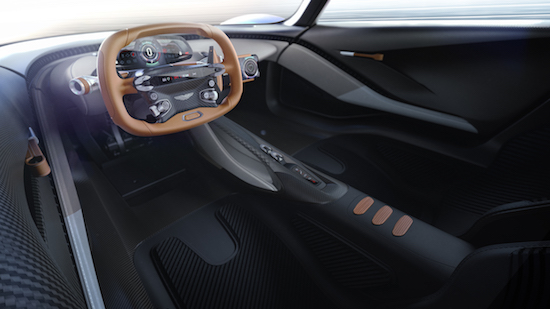 The center console of the Aston Martin AM-RB 003 is 3D printed, which has helped reduce the weight by 50 percent. Image courtesy Aston Martin.

“We were quite deliberate in AM-RB 003 to not disguise its lineage, but we were equally emphatic that it would be a distillation of Aston Martin Valkyrie and not a dilution,” said Miles Nurnberger, Aston Martin director of design. “The design isn’t as extreme in some areas, but it pushes just as hard in others, and is even taking certain ideas and concepts a step further. That’s a natural function of design evolution, but also testament to just how great an influence working with Red Bull Advanced Technologies on Aston Martin Valkyrie has had on our approach to everything that’s come since.”

The vehicle also includes FlexFoil aerospace technology from FlexSys Inc., to create a variable airfoil across the entire rear wing of the vehicle. According to the company, this allows for the car’s downforce to be changed without altering the physical angle of the element.