At AU 2016 (Nov 14-17, The Venetian, Las Vegas, Nevada), vocal percussionist Butterscotch performed the Gershwin classic “Summertime” to open one of the keynotes. (You can watch her performance in this archived footage of the keynote, listed as Part 10, opening performance; also in this YouTube clip by AU attendee Julian Kang.) The lithe, spunky singer produced a symphonic mix of electronics, drumbeats, and saxophone melodies with nothing but her naked mouth. The only real instrument she carried was an acoustic guitar, with Chinese characters inscribed on the fret board. In short, Butterscotch is a human sound-machine.

Taking his turn onstage, Autodesk CTO Jeff Kowalski discussed machines that are on the verge of acquiring human characteristics.

“Computers have always been a little bit like Mr. Spock [the epitome of logical thinking, as personified in the character on Star Trek]. Today, they’re becoming more like Captain Kirk. Spock is logical and brilliant, but as we saw on the show, that was never enough to save the day. It’s usually Captain Kirk who came up with the ultimate solution ... something driven by hunch, intuition, and creativity.”

Autodesk CTP Kowalski on using generative design to come up with the design of a chair, in a project by Autodesk intern Brittany Presten.

In the past two years, Autodesk began developing algorithm-driven design or generative design technologies. Kowalski said, “It’s a way of collaborating with the computer. We don’t tell it what to do; we tell it what we need.”

The company’s endeavors resulted in Autodesk Within, Autodesk Inventor Shape Generator, and Project Dreamcatcher. The company employed Autodesk Within, a topology optimization software, in its Bionic Partition project, jointly undertaken with Airbus and APWorks. Shape Generator is a feature in the company’s mechanical CAD product Autodesk Inventor. Autodesk Dreamcatcher, capable of generating complex lattice and honeycomb structures, is still branded a technology preview, not a commercial product.

Can a piece of software develop the intuition for what makes a sturdy, comfortable chair? If so, what would such a chair look like? Brittany Presten, an Autodesk intern, and Arthur Harsuvanakit, a technical assistant to Autodesk CEO, discovered the answer when they decided to design a chair using Dreamcatcher. (The project was detailed in this Autodesk blog post.)

“The software doesn’t understand what a chair is supposed to be,” explained Harsuvanakit in his talk with DE in the AU exhibit hall. “All we did was to give the software the loads on the backrest and the sitting surface.”

The general shape—the design space for the software to explore—was created in Autodesk Fusion 360, then fed into Dreamcatcher with the desired constraints. The optimal design proposed by the software, Harsuvanakit noted, “has 18% less volume and decreases the max displacement by 90.4% as well as decreases the max von Mises stress by 78.6%. So that’s less material, less bending (displacement) of the wood when you sit in the chair, and an equal distribution of your weight across the frame.”

Currently, a number of mechanical design, industrial design, and architecture software packages in the market offer users the ability to apply cold, indifferent mathematical approaches to find the most efficient geometry, which typically means the lightest, strongest shape. The playfulness, aesthetic treatments, and creative touches come from the human experts: engineers, designer, and architects. It’s difficult to imagine how such individualistic ideas might be incorporated into the code of the software itself.

The BLK360 from Autodesk and Leica

Amar Hanspal, Autodesk’s senior VP of products, introduced what he described as “the iPhone of laser scanning”—a hardware born out of an Autodesk-Leica partnership. Roughly the size of a tabletop lamp, the BLK360 is a laser scanner that you can use to digitize and capture physical environments and interiors. The hardware is designed to work with Autodesk Recap 360, a software for processing and viewing scan data. Since Recap 360 works on mobile devices, you can remotely operate the BLK 360 from an iPad and send the data directly to a cloud storage.

Though historically a design software maker, Autodesk is now taking on the role as a platform provider. With the launch of Autodesk Forge in June 2016, the company began recruiting third-party developers who could create plug-ins, apps, and products on top of its technology. At AU, Hanspal pitched Forge to the attendees.

“Forge at its core is a bunch of micro web services and an infrastructure to power modern design and engineering applications,” he said. “And we are making it available to you.” He estimated “thousands of companies” are already building applications on Forge.

The Quantum of Collaboration

As one of the major design software maker serving various disciplines, Autodesk is well-positioned to address collaboration. Hanspal introduced Project Quantum, a technology that “integrates design, engineering, fabrication, and other applications into the single data-model environment for multidisciplinary collaboration.” He revealed, “Many in the organization tried to dissuade me from sharing this with you, but I can’t resist.”

As he put it, Quantum is not a “giant monolithic app” but “a family of web and mobile experiences that work together and are kept in sync through a common communication bus.” The teaser presentation by Hanspal focuses on Quantum’s benefits to architecture and construction.

“Summer time, and the livin’ is easy. Fish are jumpin’ and the cotton is high,” sang Butterscotch.

This winter, dreamin’ is easy, ideas are jumpin’, and hopes are high at AU 2016. The optimism is tempered by the winds of change and the unknown, coming from the country’s post-election climate. 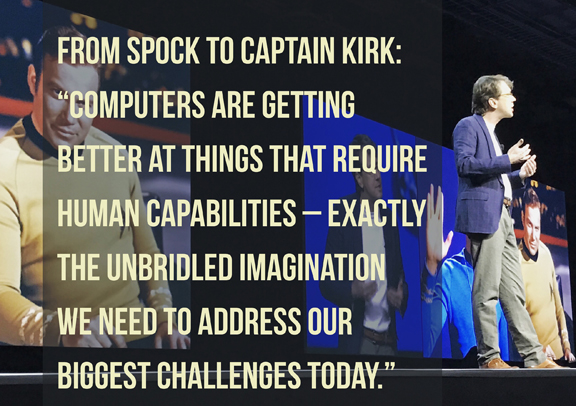