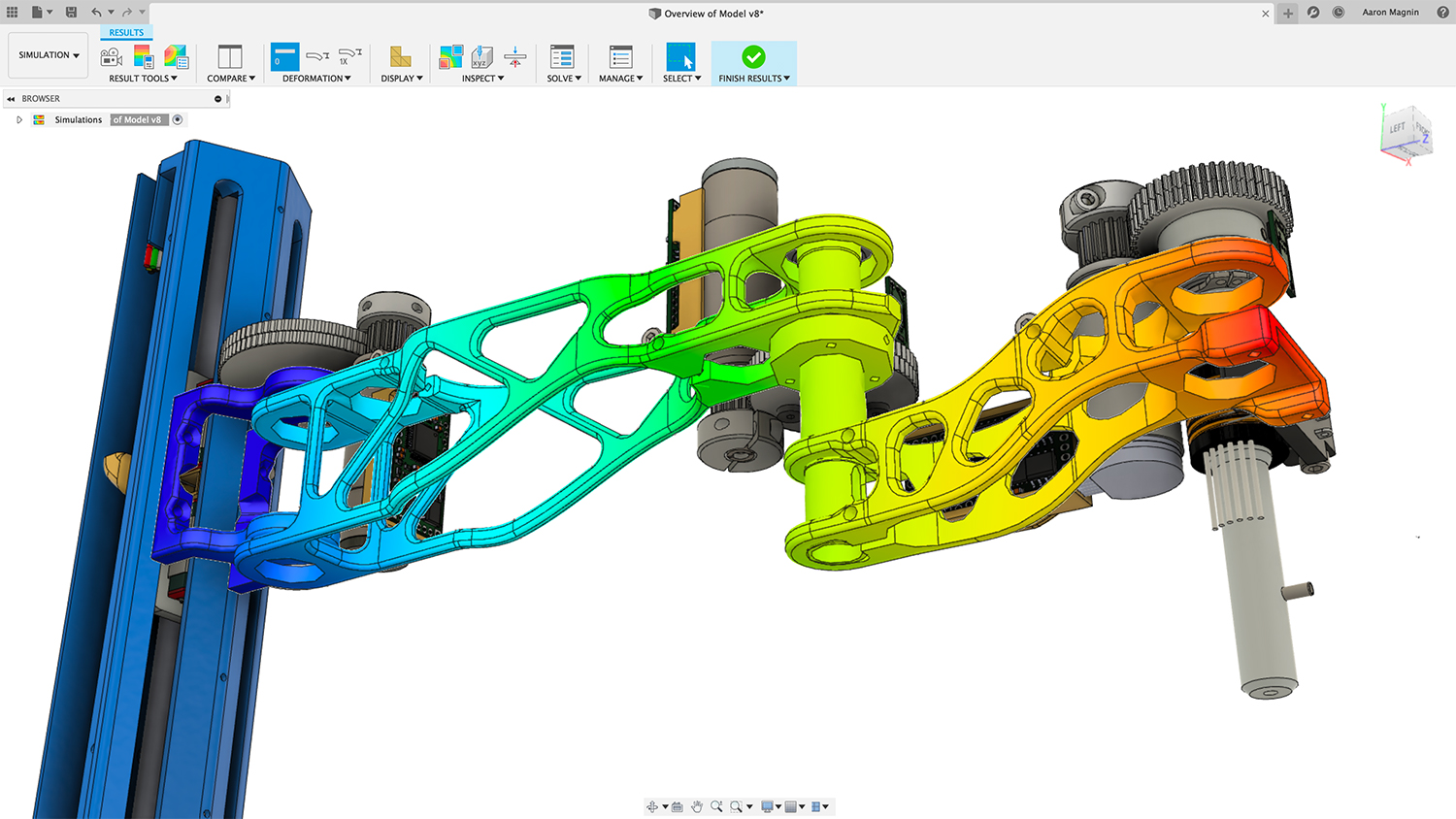 Autodesk returns to its platform vision with new vigor

Autodesk brings its focus back on the Forge development platform, hints at more access to Forge via APIs, announces two new Fusion 360 Extensions

Autodesk University (AU), the Autodesk user gathering, has just wrapped up, but the company's transforming is ongoing.

The last two years were “a decade of change all compressed into 18 months,” said Autodesk CEO Andrew Anagnost. “I saw how difficult ... how challenging it was for our customers. Some of our customers weren’t ready for this shift.” Throughout the industry's collective challenges, “Technology is a force multiplier of your ingenuity,” he pointed out.

This year's AU was in a virtual space far away from glitzy Las Vegas, the usual site of the annual event before the pandemic. But the presentations hit some familiar notes, echoing the company's platform vision first revealed five years ago.

Most conversations about collaboration revolve around file access, but Anagnost thinks the focus should be somewhere else. “It’s not our files that are valuable but the data that’s locked inside ... What if we could extend the value of Autodesk Forge platform today, to connect entire ecosystems with data flow that connects from the top floor to the shop floor?” he asked.

A Brief History of Forge

Historically, Autodesk was not a platform provider. It was— and still is—best known for its design and drafting software titles, led by its flagship product AutoCAD. But over time, as users and third-party vendors developed custom applications and plug-ins to run on AutoCAD and other well-known titles, the products begin to take on platform-like roles. At some point, the company must have come to realize it doesn't have the talent and knowhow to address all the industry verticals that rely on its products. Therefore, it must by necessity begin providing a set of robust APIs. That was the genesis of its platform vision.

In 2016, at the first-ever Autodesk Forge Developer Conference in San Francisco's Ford Mason, Amar Hanspal, the company's then-VP of Products, said, “We’re probably not going to go after the shoe industry by building something called AutoShoe. But perhaps one of you might.” If you do, the company would want you to build it on top of Autodesk Forge.

“Forge is a set of APIs made especially for manufacturing and building industries. It’s made for the cloud. It spans modeling, drawing, visualization, simulation, IoT—all the data-centric operations people can assemble to build applications,” said Hanspal.

This month, as though continuing the same speech from 2016, Srinath Jonnalagadda, Autodesk VP of Industry Strategy, Design & Manufacturing, said, “Our vision is a singular cloud environment, built on the Forge platform, which can support the entire product development from concept ideation to production.”

Autodesk caters to three major market segments, each a behemoth of its own: AEC (Architecture, Engineering, Construction), Media & Entertainment (encompassing film and games), and Product Design (encompassing manufacturing). As the company shifted away from the traditional perpetual licensing model to the subscription model, it also began to transform its legacy desktop products into cloud-integrated product suites running on thick clients. The change resulted in on-demand services, from simulation and rendering to generative design, payable via tokens.

Under the platform vision, such services will likely increase. “Long term the goal for Autodesk Flex [the token-based on-demand payment system] is to offer an environment where people only have to pay for what they use. Maybe small companies can access powerful capabilities that they use only occasionally. Ultimately the Flex style will replace our traditional enterprise agreement,” said Anagnost during the live Q&A with industry press at AU.

“What we won’t do, is subdividing [the products] so much,” he also promised. The microservices are “going to exist in a cohesive environment.”

Opening Autodesk Forge to developers mean competitors like Dassault Systemes, Siemens Digital Industries, and PTC could also develop applications running on top of Autodesk products. “People might build things that directly compete with our products, and we are OK with that,” said Anagnost.

The move from product to platform is not exclusive to Autodesk. Dassault Systemes similarly promotes its 3DEXPERIENCE Platform, with CAD, PLM, and simulation software as interconnected applications within. 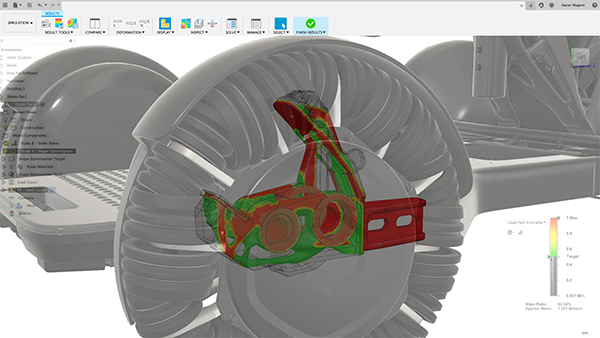 Autodesk Fusion 360, the company's centerpiece in the Product Design portfolio, is a combination of design, manufacturing, simulation, and data management tools. As its feature list grows, it also risks becoming too bulky for some users with well-defined roles. For such users, the launch of Autodesk Fusion Extensions may be good news.

The strategy will prevent users from becoming “overwhelmed with a monolithic product,” explained Stephen Hooper, VP and GM of Autodesk Fusion 360.

“The Simulation Extension will provide users unfettered access to existing simulation capabilities under an all-access umbrella. Previously, simulation capabilities were only available on a pay-as-you-go basis. Now, designers and engineers can choose the option that works best for them to explore more ways to reduce weight, materials cost, and enhance product performance,” Reese pointed out.

A new PCB Extension is also expected, delivered in partnership with Ansys. “By embedding Ansys’ market-leading electromagnetic capabilities within Fusion 360, the integration will provide Electrical CAD users with the ability to perform near real-time PCB analyses within the Fusion 360 workflow,” Autodesk writes in its announcement. The PCB Extension marks the first third-party extension for Autodesk Fusion 360. 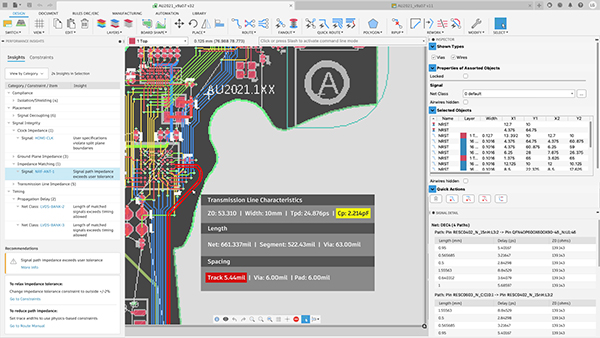 The Autodesk Fusion 360 PCB Extention is developed in partnership with Ansys. Note that early concept art shown here may be different from real UI when released. Image courtesy of Autodesk.

For platform vendors, open standards a key part of the strategy. Third-party developers cannot build on inaccessible proprietary formats. For years Autodesk has jealously safeguarded its DWG format, using legal means to stop attempts to reverse-engineer the format. But more recently, the company has shown signs of softening stance. Settling its long legal battle with ODA (the Open Design Alliance) and joining the alliance, are significant moves in this direction.

Covering Autodesk's ODA membership, Randall Newton, DE's regular contributor, observed, “Standard ODA membership terms require member companies to share any code they develop for DWG compatibility with ODA for the benefit of all members. Autodesk was granted an exception. If the old phrase 'burying the hatchet' is a metaphor for this new agreement, the hatchet is only half buried.”

In the Q&A at AU, Anagnost hinted at the same approach—embracing open standards for mutual benefits, but reserving some room for Autodesk-exclusive advantages. “We’ve reached out to embrace all the open standards out there,” he pointed out, but also said, “We don’t believe open standards can do everything. They never do.”

The Main Message from AU 2021? May the Forge be with You! Read about Autodesk's vision for its Forge platform, its stance on open standards, new Fusion 360 Extensions, and more. #AU2021 #autodesk #autodeskforge https://t.co/qCSa4KyaR9 pic.twitter.com/UsCOZ9JbdJ