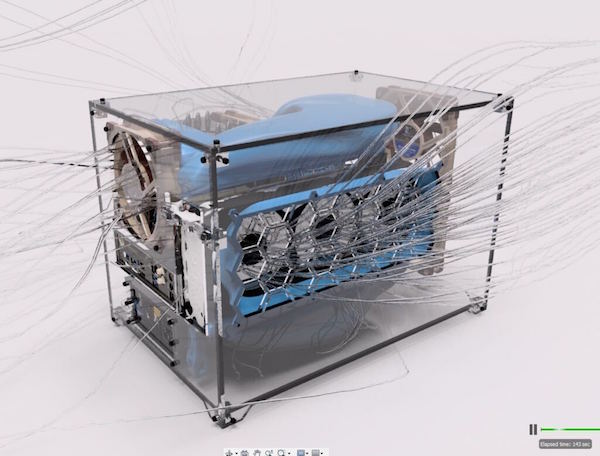 The addition of a fluid solver in Autodesk Fusion 360 paves the way for CFD-based generative design tools in the software. Image courtesy of Autodesk.

Autodesk University (AU), the annual gathering of Autodesk users, usually takes place in Las Vegas’s Sand Expo & Convention Center, about 15 mins’ walk from the artificial canal in The Venetian. But this year, with the threat of the pandemic still looming, Autodesk decided on a safer bet, moving the convention online.

AU 2020 Virtual came online on November 17, drawing 99,000 worldwide attendees per Autodesk’s estimate. Appearing in a prerecorded video keynote, Autodesk CEO Andrew Anagnost said, “What we all consider normal has changed. Wherever you are, each and every one of you have seen how important resilience is, how fragile our processes and supply chains are … Together I know we can reimagine what’s possible. Because I see how many of you adapted. You have reimagined how to leverage data and technology.”

Autodesk Fusion 360, the cloud-friendly CAD-CAM-CAE suite, got significantly more robust when the company added generative design tools to the collection. It came in the form of the Autodesk Fusion 360 Generative Design Extension, released in June 2020. But the optimization scenarios were limited to structural deformation. At AU 2020, the company signaled an expansion.

“This year we added the fluid solver to Fusion 360, enabling generative designs to include pumps and valves,” said Stephen Hooper, VP and GM, Fusion 360, Autodesk. “For the first time, you can now access Autodesk Moldflow solver directly from inside Fusion 360,” he added.

In the AU 2020 session titled “Workflow Assessment for Generative Design in Fusion 360,” industry analyst and consultant Joe Walsh, IntriSIM, said, “Real-world design may or may not involve multiple physics—structural, vibration, fluid, electromagnetics, and so on. The simplest cases only require one physics. As we become more and more optimal in our designs, it becomes more important to understand the impact of the other physics. So the user must be careful that the supported generative design capabilities adequately represent the physics in the real-world scenario.”

CFD calculation is known to benefit from the highly parallel GPU architecture. Therefore, GPU acceleration is expected to be crucial in CFD-based generative design workflows.

Beyond product design and manufacturing, generative design has also found a place in Autodesk’s architecture and construction business. The company hopes the technology will play a role in space planning while humanity copes with social distancing and challenges to sustainability. 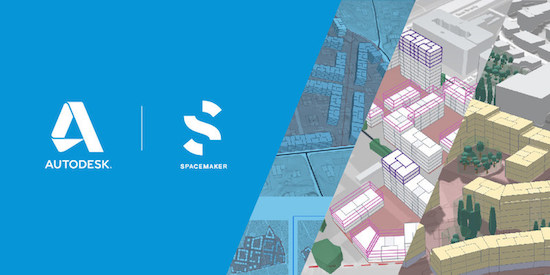 During AU 2020, Autodesk announced it’s acquiring Spacemaker, a startup that develops AI-powered generative design software for urban space planning. “Spacemaker is a lesson in the power of insights and automation, giving designers the ability to create and test urban design ideas in minutes,” said Anagnost. “With two billion more people expected to call our planet home by 2050, speed of design and sustainability in urban planning must be priorities. Spacemaker technology offers a fundamental shift in how we imagine and build cities to keep people and the planet healthy.”

Last year, Ansys CEO Ajei Gopal joined Autodesk CEO Andrew Anagnost on stage during AU 2019 to discuss their partnership. This year, in the Design and Manufacturing Keynote, Hooper revealed how the two companies are making roundtrip data exchange between their products easier.

“Last year, we announced our partnership with Ansys in the field of generative design. This year, we are pleased to announce interoperability with all of Fusion 360 simulation study types with Ansys Workbench. This allows you to export simulation setups, including the ability to roundtrip results data back into Fusion,” said Hooper.

The Generative Design Extension is merely a prelude. It’s part of the company’s strategy to offer many more extensions to Fusion 360 users. The Machining Extension, for example, augments the software’s CAM tools with multi-axis toolpath strategies, toolpath optimization, and automated programming. Similarly, Additive Build Extension gives you the ability to set up, slice, and pack your additive manufacturing design to send to your printer. It also gives you customized automatic orientation settings and support structures settings. These are already out and available, but the company also teases AU attendees with news of future extensions. The Manage Extension, a team-level PDM/PLM solution; the Additive Simulation Extension; the Nesting and Fabrication Extension; and the Injection Molding Extension are all set to debut in early 2021.

The extensions “can be switched on based on the persona of the user in the production environment,” said Hooper. “Each can be turned on selectively just for the duration required .. [They] are intended to offer the extra level of capabilities required by specialist personas.”

In the session titled “The Ultimate Fusion 360 Workstation,” James Neville, Principle Business Consultant, Autodesk, demonstrated how he used Autodesk Fusion 360 to model a professional workstation with its internal components, then running thermal and airflow analysis to study its performance. He also discussed his own hardware setup.

“On its own the RTX 2080 Super was the second fastest GPU in the market at the time of the purchase, but the newly released NVIDIA GPUs has a performance-to-collar ratio that’s around two times higher,” he observed.