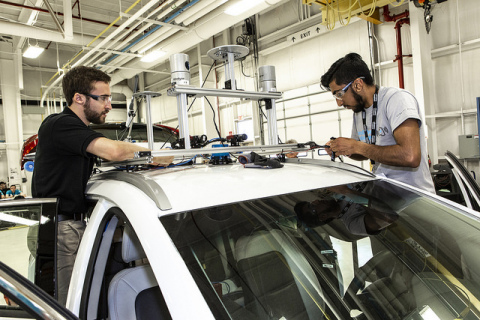 The teams are collaborating on a three-year project to turn a Chevrolet Bolt EV into a self-driving car. Image Courtesy of SAE International.

Understand the role of LiDAR on vehicle autonomy. Know how and where to incorporate sensors in car design. Optimize software and systems integration. This is not the workload for an engineer developing autonomous vehicle technology at a top-tier automotive OEM, but rather the agenda for student teams participating in AutoDrive Challenge, a newly established three-year autonomous vehicle competition.

AutoDrive, sponsored by General Motors and SAE International, is tasking eight university-level student teams with developing and demonstrating a fully autonomous passenger vehicle by the end of year three. The teams, which are training their design efforts on retrofitting a Chevrolet Bolt EV, compete at different cycles. The big payoff comes at the end of year three when the teams’ vehicles tackle an urban driving course in an autonomous driving mode that meets the specifications of SAE Standard Level 4 definition. 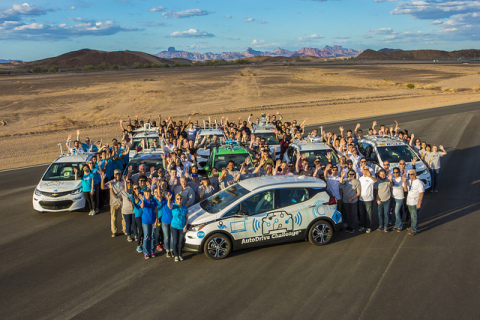 As year one came to a close, student teams competed last spring in GM’s Desert Proving Grounds in Yuma, AZ. Teams were judged on their early concept designs and presentations of the social responsibilities associated with self-driving cars after familiarizing themselves with the technology, including sensors, LiDAR, compute systems, and code, as well as doing a deep dive into systems integration.

“The first year is mainly dealing with static objects and driving within lane boundaries,” explains Christoph Hahn, senior technical education specialist at MathWorks, which provided its technical computing software, including MATLAB and Simulink to the student teams as part of their training. “It’s not crazy difficult, but I was impressed at how quickly they went into competition mode.”

Year two, which kicked off last month, will focus on urban environment driving scenarios with both static and dynamic objects. The second-year competition will be held at Mcity, an urban autonomous vehicle test facility that simulates urban and suburban driving environments located at the University of Michigan’s campus in Ann Arbor.

These hands-on competitions provide a real-world aspect to learning that is difficult to replicate in a traditional university or even lab setting, Hahn says. In addition, the students learn skills typically not taught at college level, including project management, the importance of sticking to deadlines, and how to communicate effectively with a team. “Students are doing exactly what the automotive industry is doing right now,” he explains. “This is no artificial challenge—it simulates exactly what they’d be facing if they were an engineer working on autonomous vehicles at an OEM.”

To get a look at what the AutoDrive Challenge is all about, check out this video.