Review: BricsCAD Turns on the Power with V19 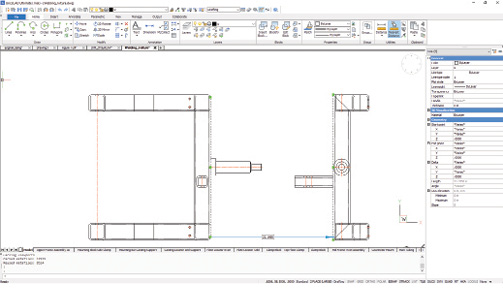 The BricsCAD interface varies depending on the current workspace. The new nearest distance tool lets you view and modify distances between two selected entities. Images courtesy of David Cohn.

BricsCAD has stood out for many years as a low-cost alternative to AutoCAD, coming from a small privately held company able to devote its attention to a single product. That stature changed last year when Bricsys, its Belgian-based developer, was acquired by Hexagon AB, a publicly traded Swedish company with more than 19,000 employees and revenue of more than $4 billion (compared to Autodesk’s 9,000 employees and $2.57 billion revenue for fiscal 2019).

Although BricsCAD development remains based in Ghent, Belgium, the acquisition gives Hexagon an end-to-end platform from conceptual design to building information modeling (BIM) to construction execution and reality capture. But BricsCAD is also a great tool for general CAD and mechanical design.

Bricsys was founded in 2002. Early versions of BricsCAD were essentially rebranded releases of IntelliCAD, an early AutoCAD workalike. But after acquiring intellectual property from the Russian software company LEDAS, Bricsys went on to rewrite BricsCAD using its own code. As a founding member of the Open Drawing Alliance (ODA), much of the Bricsys code is now also available for use by other ODA member companies.BricsCAD uses DWG as its native file format for 2D drafting and 3D modeling. Although BricsCAD duplicates most AutoCAD features, it then goes well beyond AutoCAD by serving as a platform for BIM and mechanical product design.D 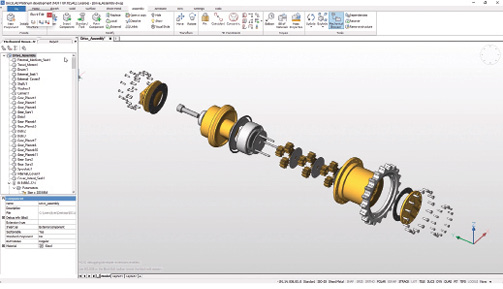 The program is available for Windows, MacOS and Linux and features near-complete compatibility with AutoCAD, including scripts, menus, LISP routines and customizations. There is also an active developer network with hundreds of add-on programs available.

Although BricsCAD is an AutoCAD workalike, it isn’t a look-alike. When you first start the program (in its Drafting workspace), the interface consists of a Menu bar across the top of the screen, with an Access toolbar (similar to AutoCAD’s Quick Access toolbar) and a ribbon docked below.

Like AutoCAD, each open drawing has its own document tab across the top of the drawing area, which you can use to easily switch between drawings. Tabs at the bottom of each drawing let you switch between Model space and various layouts. A Properties panel is docked to the right of the drawing window. There is also a docked command window, just like AutoCAD, and a Status bar across the bottom of the screen. 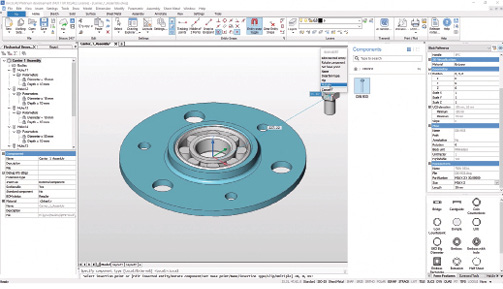 Parametric parts chosen from a library of 30,000 objects can be inserted by dragging and dropping from the Components panel and then modified by adjusting parameters.

Within the drawing window, a user coordinate system (UCS) icon is typically located in the lower left and a Look From widget (similar in function to AutoCAD’s ViewCube) appears in the upper right. Most commands are the same as AutoCAD. For example, you can start the Line command from the ribbon, from a menu or by typing the command name or a shortcut (the same as aliases in AutoCAD), although instead of accessing command options in the command line or by right-clicking, you must type or choose the option from a prompt menu that initially pops up in the upper-right corner of the drawing.

Another user interface feature unique to BricsCAD is the Quad cursor menu, a panel that provides a grip-editing alternative. When you hover over an object, the Quad cursor reports information about it and, when appropriate, displays commands to modify the object. If no command is active, when you right-click in a blank spot, the Quad cursor presents commands that you would most likely use. Like most aspects of BricsCAD, the Quad cursor can be customized to change its behavior and appearance.

Although BricsCAD doesn’t include every function found in AutoCAD, the list of missing features is shrinking. For example, BricsCAD V19 adds a Block Editor, a dedicated environment for creating and editing blocks.

While working in this environment, you see only the objects that are part of the block, but the capabilities are much different from AutoCAD. For example, to create a parametric block in BricsCAD (analogous to a dynamic block in AutoCAD), you must add parameters to the block, save the block as a separate drawing and then insert it using the BIMINSERT command. Once inserted, you can select an instance of the block and then use fields in the Properties panel to adjust parameters.

These differences can affect compatibility. When you open a drawing created with AutoCAD that includes dynamic blocks, those blocks function in BricsCAD just as they do in AutoCAD, but you cannot edit the blocks in BricsCAD.

When you open a BricsCAD drawing in AutoCAD, however, parametric blocks lack their parametric capabilities and cannot be modified using AutoCAD’s block editor, but upon reopening the drawing in BricsCAD, those blocks are once again parametric. 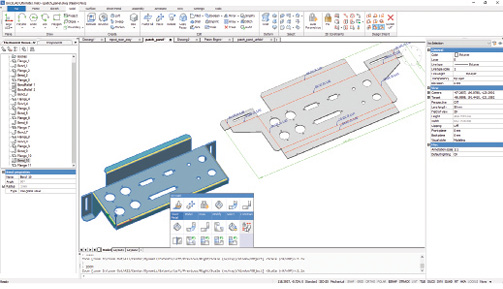 In other respects, BricsCAD goes beyond AutoCAD’s capabilities. A perfect example is the new Blockify tool, which searches the drawing for an identical set of entities and replaces them with block references. Also new to BricsCAD V19 is a PDF Import command that lets you import geometry from a PDF file, similar to the function added to AutoCAD 2017.

Like that release of AutoCAD, the new tool in BricsCAD does fine converting TrueType text into MTEXT. But, since the PDF format doesn’t recognize AutoCAD SHX fonts, text that had originally been defined with SHX fonts is stored in the PDF file as geometry. When that PDF file is imported, the SHX text becomes polyline geometry. AutoCAD 2018 solved this problem by introducing a text recognition tool that converts the geometry representing text back into actual text objects. Unfortunately, BricsCAD does not yet include that capability.

BricsCAD V19 also adds an improved dimensioning tool that lets you apply multiple types of dimensions using a single command, similar to functionality introduced in AutoCAD 2016. But the new Nearest Distance function is unique to BricsCAD. When you select one entity and then select another, the program displays the shortest distance between them. You can then move the second entity in relation to the first by simply changing the dimension.

The new release also introduces Adaptive Grid Snap, which lets you manipulate objects using concise values without keyboard entry. After moving the cursor over an object, you press and hold the left mouse button to display a Manipulator widget. When you move the cursor over one of the widget’s axes and press the left mouse button again, the program displays a dynamic ruler. You can then move the object using the ruler. The ruler resolution adapts based on the current zoom factor.

New data linking tools let you link data from an Excel spreadsheet directly into a table within the drawing. Once you have established a link, any changes you make in the linked Excel spreadsheet are automatically pushed to the table in the BricsCAD drawing.

Over the past few releases, Bricsys has been enhancing the program’s BIM and mechanical design capabilities. For DE readers, we focused almost exclusively on the mechanical tools. BricsCAD Mechanical now includes a library of 30,000 parametric parts. These individual drawing files can be inserted as blocks by dragging and dropping them from the Components panel and then modified by adjusting parameters in the Properties panel. 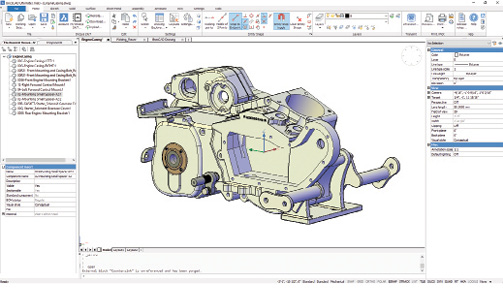 Communicator for BricsCAD lets you import and work with geometry from SolidWorks or other major CAD programs.

You can animate steps, generate drawing views of the exploded representation and place balloon annotations on corresponding drawing views. New in V19 is the ability to automatically constrain and parameterize solid models in a single operation. And again, BricsCAD goes beyond AutoCAD in its ability to apply constraints in 3D and 2D.

BricsCAD Mechanical also incorporates some rather sophisticated sheet metal capabilities, including the ability to model sheet metal parts and generate their unfolded representations, complete with manufacturing information. With the addition of Communicator for BricsCAD ($715), a separate import/export module, you can work with geometry and product and manufacturing information data from most major CAD programs.

Unlike AutoCAD, BricsCAD does not require a subscription. You can buy it once and it’s yours to use forever, although for a yearly fee you gain access to priority support and free upgrades. Bricsys also offers annual subscriptions as well as volume pricing and network licenses.

You can download a free trial of BricsCAD to try the Ultimate edition for 31 days. A trial of Communicator is also available as a separate download. During the trial, you can set your copy of BricsCAD to run as any of the available products (Classic, Pro, Platinum, Mechanical, BIM or Communicator) so you can see which feature set is best for you. Bricsys also offers Bricsys 24/7, an online project collaboration tool (with annual prices based on the amount of cloud-based storage needed), and BricsCAD Shape, a free conceptual modeling tool.

BricsCAD help and tutorials are available online, although most tutorials are simply videos showing a particular function without the benefit of sample files or step-by-step instructions, which can make learning the program’s more advanced features a bit challenging. There is also an extensive eBook, “BricsCAD for AutoCAD Users,” that covers most of the program’s capabilities, explaining them from the perspective of someone who already knows how to use AutoCAD.

BricsCAD provides a lot of power at a fraction of the cost of AutoCAD. It then goes beyond AutoCAD’s native capabilities. Whether you’re looking for an affordable DWG-based alternative to AutoCAD or a full-blown BIM or mechanical modeling program, BricsCAD deserves serious consideration.