CAASE20 Keynote: Simulation Governance Can Carry You Through the Post-COVID World

On Day Two of CAASE20 Virtual Conference, analysts propose use of simulation governance to cope with engineering in the socially distanced era 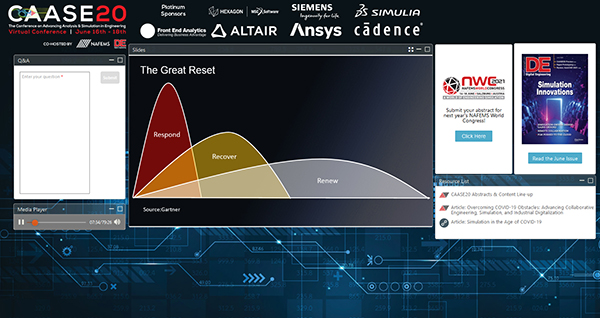 In CAASE20 conference keynote, Gartner analyst Marc Halpern discusses the phases of recovery in a pandemic.

In the National Association of Manufacturers's (NAM) 2020 Q2 survey, “33.9% of manufacturing respondents reported a positive outlook for their company, the lowest reading since the first quarter of 2009 and down from 75.6% in the previous survey. Overall, the data reflect a sector that is experiencing its worst contraction since the Great Recession—a finding that mirrors other economic indicators. The vast majority have continued operations (67.1%) or temporarily halted only part of their operations (31.6%). Among large manufacturers, 50.8% are completely operational, while roughly 73% of small and medium-sized firms state the same.”

Gartner's own survey (conducted in March, during the early phase of the Coronavirus outbreak) reveals “55% of tech CEOs had not begun preparing for an economic downturn.” According to Patrick Stakenas, senior research director at Gartner, while “43% of tech CEOs were worried about an economic recession impacting their revenue growth in the next 12 months, many delayed taking action to prepare for this eventuality.”

For Halpern, the narrow room to operate suggests inevitable changes. “We need to prepare to do business in a very different way. It’s going to be more socially distanced, more distributed, with reduced travel, probably doing fewer physical prototypes, more simulation, fewer people in the lab even when we do prototyping, wearing masks ...,” he outlined.

During the Q&A, he also shared his observation of how certain manufacturers reconfigured their operations to weather the pandemic. “The work shifts are much more staggered to maintain social distancing. In factories, there are fences to direct people’s traffic. Factory workers have been supplied with headphones to prevent surrounding noise, but also to communicate without coming within six feet of one another. They maintain a separate set of factory clothing apart from their street clothing. There's temperature check ...,” he said.

A a result of the pandemic, engineering teams are adopting more cloud technologies, from collaboration to design tools. “Back in 2012 I had predicted that cloud will be the mainstream platform for engineering by 2017. My prediction was wrong,” Halpern admitted. “Most cloud adoptions by 2017 had pretty modest, actually. A lot of cloud for back office stuff, such as email. When it comes to CAD, CAE, it was relatively modest. The reason—the on-premise software was deeply ingrained, and the cloud tools were weak in functionality.”

But COVID-19 changed all that. “All of a sudden, there’s high interest in having high performing engineering tools in the cloud. Simulation governance and model-based engineering are going to become increasingly important,” said Halpern.

“Before now, socially distance was not a priority. Now this is mandatory, and automation is replacing physical reality,” noted Langsten. “The automation of simulation governance is a prerequisite to the automation of the product. Simulation is an enabler for full automation.”

For more, visit CAASE20 Conference home page. The conference is cohosted by DE.