This image shows a time lapse of a dip-coating process of an armature. The new computationally affordable feature in STAR-CCM+ v10.02 combines the Volume of Fluid and Thin Film modeling capabilities to predict the paint thickness on the part and the droplets of excess paint falling away from the part. Image courtesy of CD-adapco. 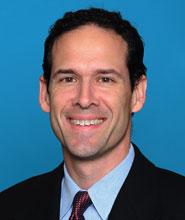 Paul DePodesta is the vice president of player development and scouting for the New York Mets. Peter Brand, a character based on him in the movie Moneyball, was played by Jonah Hill.

In 1999, long before Big Data was an over-used term, Paul DePodesta turned the under-funded Oakland Athletics into a competitive baseball team by analyzing the data the team used to make its decisions.

A best-selling book, adapted into the movie Moneyball, was based on the team’s efforts. At the time, multi-million dollar contracts were being awarded to players based on how recruiters felt about them, whether they looked good in a uniform and what their girlfriends indicated about their confidence levels, said DePodesta, who keynoted the STAR Global Conference 2015 in San Diego this week.

The leap from baseball data analytics to engineering data analytics is easy enough to make, but DePodesta took the parallels a step further. Data analysis is most valuable when an organization’s process is setup to take advantage of it. Changing the status quo the way the A’s did can be more difficult than it sounds because teams — like companies — become entrenched in doing things the way they’ve always been done.

“It’s all about process,” DePodesta said. “Good process equals good outcomes ... Processes are put in place at a particular time and under particular circumstances, but as time marches on and those circumstances change, often processes don’t.”

In the engineering world, those changes are being driven by new technologies, such as advances in simulation and optimization software. Over 35 years, CD-adapco’s process to upgrade its software has changed with the times. The company’s Steve Portal customer service tool, launched in 2012, has served 3.7 million Web pages, including 2,500 knowledge articles, to 67,000 people. STAR-CCM+ IdeaStorm has collected 2,275 ideas for software improvements from users since it was implemented three years ago.

The company’s software development process is based on reviewing those ideas, developing the ones that are approved and rolling them out in February, June and October software updates each year. This year’s February release, STAR-CCM+ 10.02, focuses on technology, experience and productivity, said Jean-Claude Ercolanelli, senior vice president of Product Management at CD-adapco as he introduced demonstrations of 15 new features. Ten of those 15 features came from the user community.

Steve MacDonald, founder, president and CEO of CD-adapco said users can look forward to stress analysis capabilities in the next release this summer. Electromagnetics, heat transfer with finite elements and finite volumes, and an automatic hex mesher are also “getting close,” he said during his keynote.

“We’re committed, as long as I’m here, to becoming a CAE code,” MacDonald said. “The really important thing in that is it’s going to be a code that has a framework to allow all of those things to work and allow those things to interact, should you want to do that.”

“It was very supportive of doing design optimization problems,” he said, “because we can apply a lot of cores to generate answers.”

During the STAR Global Conference 2105, CD-adapco also provided a few more details about its new vibro-acoustic and aero-vibro-acoustic simulation, Wave6. 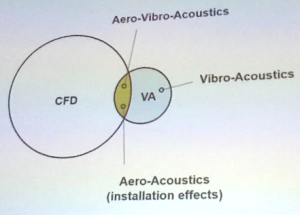 An illustration of how CD-adapco defines its Wave6 product line.

While CD-adapco appears well-positioned to continue to roll out new technologies, its users also need to focus on their processes if they want to take full advantage of them. Numerical optimization, for example, changes the workflow because it doesn’t begin with a CAD model.

“Now you don’t even start with a drawing,” said Geneviève Dutil, president of Lx Sim, a Quebec-based consulting firm. “You start with engineering. It’s a big leap of faith.”

Dutil and Lx Sim’s Yannick Sirois’ STAR Global Conference presentation focused on how they help clients use optimization as a competitive advantage.

“It’s the natural progression,” Dutil said. “It’s a bigger shift than CAD replacing the drawing board. We really think it’s the future.”

Another glimpse at the future was seen during Alex Stoll’s presentation of electric aircraft being developed by Joby Aviation. Stoll is an aeronautical engineer at the company. He showed STAR Global Conference attendees a number of designs Joby has in development using STAR-CCM+, including the Lotus that has wing-tip rotors for vertical take-off that become part of the wing structure during flight.

“Electric propulsion in aircraft shouldn’t be thought of as just another evolutionary step,” Stoll said. You can’t just swap out a combustion engine with an electric motor and take take full advantage of electric motors’ light weight.

“When you have the  the freedom you get with electric propulsion, you can really look into designs that derive benefits from the propulsion system,” he said. “That’s what we’ve been doing at Joby. We’ve been exploring, now that we have all this design freedom we didn’t have before. What goes along with that requires high-fidelity analysis to properly designs this interaction with the rest of the aitcraft. That’s where STAR-CCM+ comes in.”

And, just for fun, watch Nic Case’s radio-controlled car set a Guinness World Record by hitting 202 mph below. STAR-CCM+ was used to help design the car.