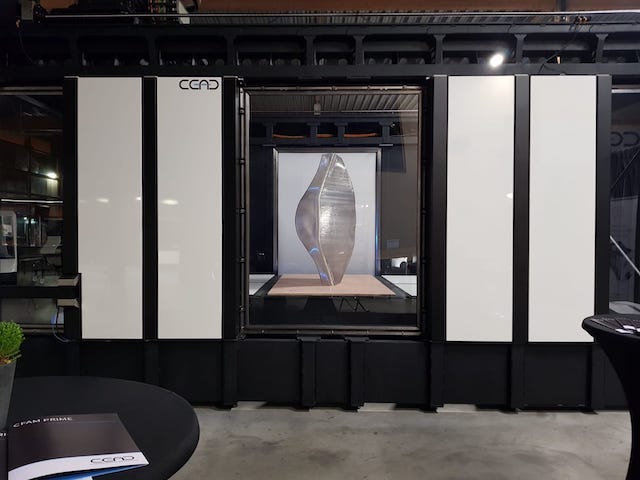 One by one, the barriers to additive manufacturing (AM) are being knocked down as a continuing spate of offerings address cost, performance and ease-of-use constraints that have relegated the technology to a supporting role, primarily for prototyping and limited production-run applications.

Now, CEAD Group is doing its part to advance the AM value proposition with the official launch of its CFAM Prime 3D printer, which brings continuous fiber printing for composite applications to an industrial scale. The company, which was formed out of Leapfrog, another Dutch company specializing in desktop 3D printers, is targeting its printer at companies in the maritime and construction space, which are ripe for a 3D printing solution that can reliably output massive composite components at high speeds.

Key to the CFAM (Continuous Fibre Additive Manufacturing) technology is its build volume—4x2x1.5 metres (13x6.5x 4.9 ft.)—and its extrusion rate of 15 kg per hour. In addition, CFAM Prime also features patented technology which allows for continuous glass and carbon fiber to be incorporated into the printing process in lieu of short fibers, resulting in the higher-strength mechanical properties that are a requisite for these kinds of 3D printing applications, according to Lucas Janssen, operations director for the company.

“Apart from large dimensions, parts created in these sectors also have mechanical requirements that demand strength and durability, and the continuous fiber enables those properties,” Janssen explains.

CFAM Prime has been designed from the ground up to meet industrial-scale requirements, Janssen claims. As opposed to filaments, which would be  too costly for these large-scale applications, the printer employs thermoplastic granule materials, which delivers more freedom in terms of material choice, from PP to PEEK. The patented dual extruder system is also unique to CFAM—one extruder melts the granules into a stream of molten material while the other adds the continuous fiber. The approach enables the printer to add the continuous strands of fiber at high pressures despite the fact that it has been historically difficult to do so while achieving the rigidity and structural performance required for end-use industrial components, Janssen says. 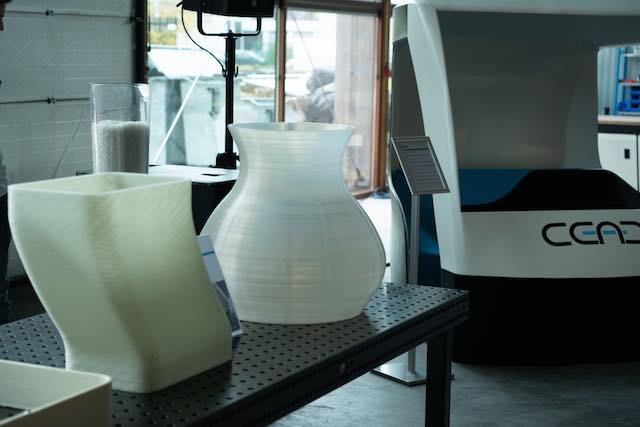 The CFAM is a large-format printer aimed at industrial applications in industries like maritime and construction. Image Courtesy of CEAD Group.

Other features of CFAM Prime which optimize it for industrial-scale work are its ability to operate around the clock without operator interference and the large build area.

Upon the heels of its official launch, CEAD already has a pair of big-name customers lined up to use the new technology. Royal Roos, an engineering leader in the maritime industry, is testing CFAM Prime for an array of applications, including for the production of gangways, creating scale models of ships for motion and resistance testing, and for prototyping a lighter weight version of a captain’s console. Poly Products, a leader in use of composites, also has a number of projects planned for the CFAM Prime 3D printer.

Commercial availability for the printer is slated for 2019. Long-term plans call for CEAD to refine and improve upon the technology to create end-parts for the automotive and aerospace sectors.