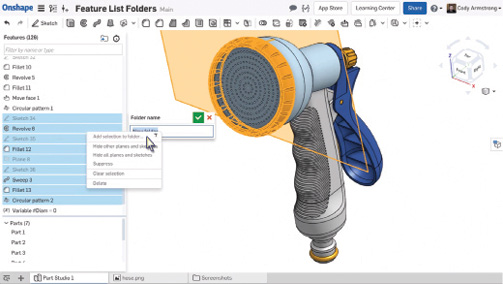 You can now create and organize Onshape features in a feature list folder. Images courtesy of David Cohn.

By now, most Digital Engineering readers have heard of Onshape. Developed by many of the same people who originally created SolidWorks, Onshape is a full parametric platform that incorporates 3D part and assembly modeling, associative 2D drawings and data management combined with sharing and collaboration, version control, release management and tools that enable users to create custom features.

But unlike most CAD programs, both the Onshape software and your CAD data reside in the cloud. That means anyone anywhere in the world can access the same system at any time using any device. On a computer, Onshape runs in a web browser. There is no software to install. You simply go to the Onshape website, log in and go to work. Any projects you already started or that have been shared with you are immediately available. For Android or iOS tablets and phones, after installing the app, you have access to nearly the same functionality as the browser version.

Because the software runs in the cloud, there are no downloads, license keys, service packs or compatibility concerns. Everyone always has the latest version of the software. And since projects are stored in the cloud, there are no files to download and there is no need to check in or check out files like in a traditional product data management system. Anyone on the design team can access projects anywhere, any time. Administrators can adjust access privileges so you retain control over your work, and you can immediately see who changed what and when it was changed.

A Host of Improvements

Because the software lives entirely online and every customer is always on the latest release, the company rolls out updates on a nearly monthly basis. Since we last reviewed Onshape (DE, June 2018), the program has gained hundreds of new features and capabilities. For example, you can now create and organize features in a feature list folder. Features can be reordered within the folder and the folder can be reordered within the feature list. You can also now filter the feature list based on part, type, or name and filter a folder to reveal only the features within a folder of that name. 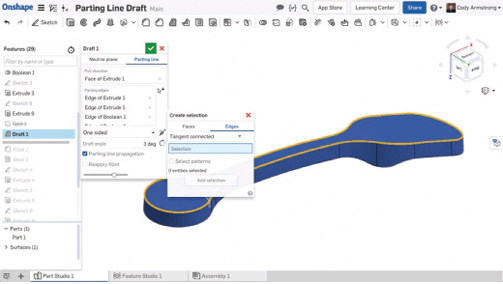 You are no longer limited to applying draft along a plane or planar face. A new parting line option lets you define the pull direction and parting edges, and you can even add draft in two directions. If a new intermediate profile is added after creating a loft, rather than having to delete and reselect the profiles, you can now simply add the new profile and reorder the profiles. Plus you now have a new option to view the curvature combs of previewed edges while creating a feature, with curvature combs updating dynamically as you modify the curves. 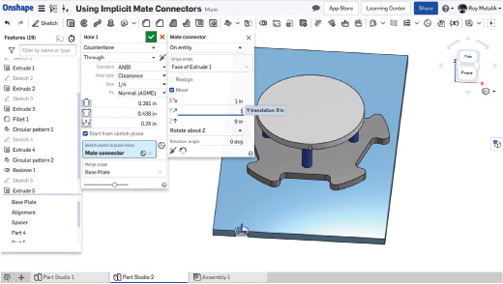 Implied mate connectors can be defined on the fly, which is faster than first defining a sketch and a vertex reference.

Onshape has long been able to use explicitly created mate connectors as a reference for transforms, as well as creating holes and other features. You can now define and use implied mate connectors on the fly. For example, you can revolve a sketch about an axis defined by the origin or a sketch line. Or, create a hole by defining an implicit mate connector at the corner of a part and then translate the mate connector by specifying appropriate offsets, which is faster than defining a sketch and a vertex reference. 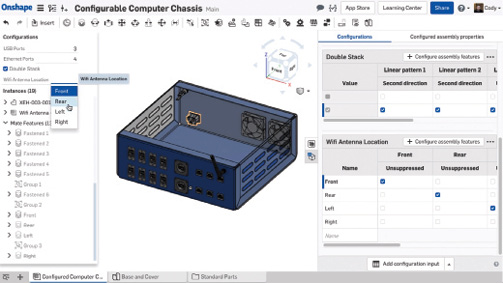 With Onshape’s ability to configure multiple independent inputs now extended to assemblies, you can build an infinite number of assembly configurations with just a few inputs.

Last year, Onshape added multiple independent inputs to allow for multiple part configurations instead of listing every design permutation in one large table. That same approach is now available for assemblies as well. You can choose the type of input—list, checkbox or configuration variable—and then configure assembly features that respond to those inputs so that changes to the input values yield different assembly configurations.

Onshape is also unique in that you can work simultaneously in both the folded and flat view. As a result, you can create sketches and features directly in either view and the features you add to the flat view and the bend view of the model appear in the same feature tree, without any extra folding or unfolding steps.

You can also now create hems using a new dedicated sheet metal feature, with options to define a straight, rolled or teardrop hem, and to specify its inner radius and total length.

Onshape callouts use the item number from the bill of materials (BOM) table to populate the text in each balloon. These item numbers are linked to the BOM and update automatically if the table order is changed or parts are added or removed. You can also now add text above, below or to either side of the callout, and also include part properties and table properties. 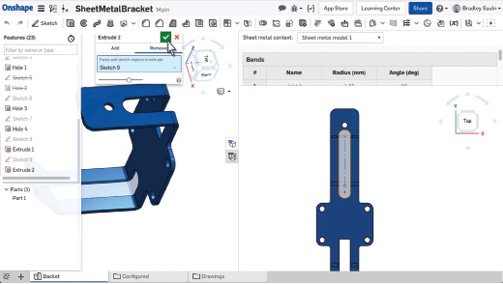 Onshape lets you work simultaneously in the folded and flat view.

Dimensions and annotations, including hole callouts, now snap to alignment lines, making it much easier to organize drawings. You can also add leaders to geometric dimensioning and tolerancing (GD&T) frames and add multiple leaders to weld and surface finish symbols.

Ordinate dimensions have seen significant improvements. Jogs are now automatically created to avoid overlapping other dimensions. If you accidentally create a jog, you can simply drag-and-drop the dimension to remove it.

You can now define the depth of section views in Onshape drawings, setting a blind value or selecting a point on the view as a reference for the depth. There is also a new dimension tool for chamfer features, with the ability to add an optional prefix. 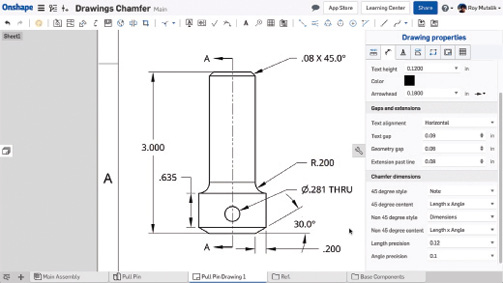 Onshape has recently added a new dimension tool for chamfer features, with the ability to include an optional prefix.

You can also split a BOM in an Onshape drawing and then drag the portion of the BOM below the break to reposition it. If necessary, you can split the BOM multiple times and split portions can even be moved to a different sheet in the drawing. And finally, when changes are made to an Onshape drawing template, you can easily update the title block and border in an existing drawing without disturbing views that have already been created.

Performance has been improved, particularly when working with large assemblies and complex views. Onshape has added integration with Google Drive and Dropbox, so you can browse for files from within Onshape. You can also import, export and search within those connected services. Additionally, Onshape remembers the last location that was imported from or exported to within a connected cloud service.

In the past, if one user switched to a different configuration, all users accessing that document would also be switched. Now, users can change configurations independently in both parts and assemblies. However, if you enable follow mode, the configuration changes will sync with the user you are following. In addition, link sharing is specific to the configuration that is active when the link is copied. So, even if the configuration is changed after sharing the link, the user that follows a link will see the document open at the configuration you had intended. 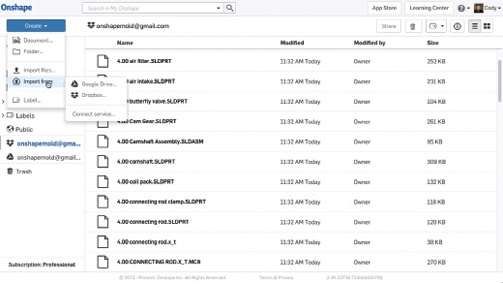 You can now integrate Onshape with Google Drive and Dropbox.

Measuring the distance to or from the origin is now as easy as selecting the reference and picking the origin, with the result shown in the lower-right corner. In addition, when you select faces, the program now shows the total area of all faces selected.

Standard PEM fasteners have been added to Onshape’s library and are available when creating holes using the hole feature tool.

Finally, when someone opens a document and they have view-only permission, they now see a special view-only toolbar near the bottom of the screen. This toolbar helps non-CAD users navigate within the model without having to spend a lot of time learning Onshape. You can even display the configuration panel, making it easy for anyone to build configurations on the fly. You can add comments and upload images to comments, follow others in the document, export and print as well as measure and obtain mass properties.

There are now five ways to use Onshape. A free version enables anyone willing to share their designs to sign up for an account and immediately begin using the software.

For students and educators, Onshape’s free Education Plan lets students log in from home or school and collaborate together in real time. The Standard version ($1,500 per year) includes part and assembly modeling and drawings. The Professional version ($2,100 per year) adds formal release management, approval workflows and notifications, complete data management, custom properties and metadata, and company-level administration tools. Users can collaborate with any other Onshape user, regardless of their plan (assuming they have access permission), but free plan users cannot edit private documents (even if the sharer has given them editing permission). 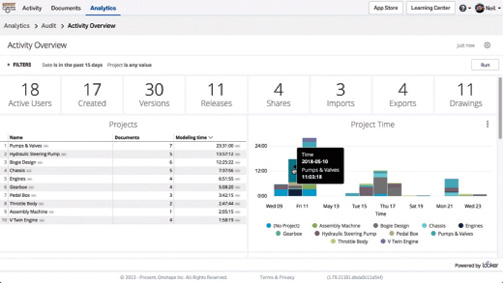 Last summer, the company launched a premium Enterprise edition, which adds real-time analytics and dashboards; project-based activity, reporting and audit trails; centralized intellectual property control; role-based access control; and project-specific workflow settings. An Enterprise subscription starts at $20,000 per year; companies can provision their users with a mix of full user licenses ($3,000 per user) or light user licenses ($300 per user) to reach the $20,000 minimum.

Because Onshape runs in a browser, a powerful workstation and a discrete graphics card are not required, although the program does perform better on systems equipped with a separate graphics processing unit (GPU) as long as the computer uses it when running the web browser.

Over the past year, Onshape has gained even more power, proving itself as a robust alternative to expensive software running on expensive hardware. It is suited for single users, small teams and now—with the advent of the new Enterprise version—large manufacturers.