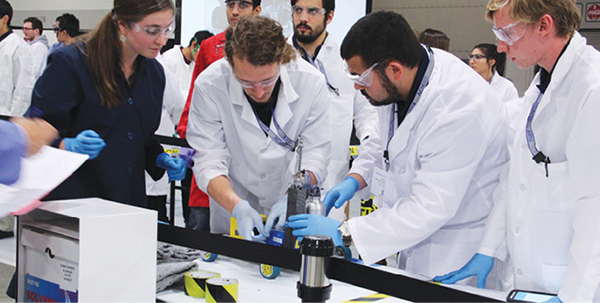 The Chem-E-Car Competition challenges students to design a vehicle’s power and stopping mechanism via chemical reaction. Image courtesy of AIChE.

The American Institute of Chemical Engineers (AIChE) sponsors an annual Chem-E-Car Competition to promote learning and professional development for chemical engineering undergraduates. Scott Fogler at the University of Michigan founded the competition in 1999, with the help of the AIChE Student Chapters Committee.

Since then, the Chem-E-Car Competition has grown to engage nearly 200 teams—or  over 1,000 Chemical Engineering Students—around the world at over a dozen regional competitions held annually. The top qualifying teams from each region compete every year at AIChE’s Annual Student Conference.

AIChE welcomed 41 teams at the 2018 Annual Student Conference Competition, and the organization is expecting nearly 50 teams to participate at the 2019 competition, taking place this November in Orlando, FL. This competition also engages hundreds of chemical engineers from industry and academia as judges and advisors who help implement the Chem-E-Car Competition Safety Program.

To learn more about this competition, we spoke to Sarah Ewing, a senior membership associate with AIChE.

Digital Engineering: What is the overall purpose or intent of the competition?

Sarah Ewing: The purpose of AIChE’s Chem-E-Car Competition is to provide chemical engineering undergraduate students with an opportunity to apply their knowledge by designing and constructing a car powered by a chemical energy source that will safely carry a specified load over a given distance and stop. This competition also increases awareness of the chemical engineering discipline and process safety principles among the public, industry leaders, educators and other students.

Ewing: Each Chem-E-Car team must design a power source as well as a stopping mechanism in order to control the distance travelled. The chemical reactions that are used to power and stop the vehicle are up to the students. Some commonly used power sources include electrochemical batteries (lead acid, galvanic cell, aluminum air or hydrogen fuel cell) or thermoelectric generators.

The most popular stopping mechanism for the Chem-E-Car Competition is the Iodine Clock Reaction, which involves mixing a form of iodine, redox reagent and starch. When these initially colorless solutions are mixed, they will eventually turn to a dark blue. This color-changing reaction will block light coming into a light sensor, which cuts the power to the motor and signals the car to stop.

One hour prior to the competition start time, Chem-E-Car teams are given a target distance, which ranges from 15 to 30 meters and a “water weight” that must be carried on the vehicle, which can range from 0 to 500 milliliters. This is when the real challenge begins, because each team must properly calibrate their stopping mechanism in order for the car to stop as close to the target distance as possible.

Ewing: AIChE’s Annual Chem-E-Car Competition has successfully produced awareness and excitement about the chemical engineering profession, and has become the premier event of the annual student conference. Every year, hundreds of spectators will come to cheer on their favorite designs during the competition. Some universities will even bring flags and signs and yell their school chants while the car is moving, similarly to what you would see at a college football game.

Ewing: AIChE is very proud of its Chem-E-Car Competition Safety Program, which was developed to ensure the safe preparation and operation of vehicles during all phases of the competition, including construction, testing and the competition. the safety program also instills the importance of process safety principles to future generations of chemical engineers. Each Chem-E-Car team must prepare an Engineering Design Package (EDP) and pass an in-person safety audit before they are permitted to compete in the event. This safety audit provides students with valuable real-world process safety experience before they enter the workforce.