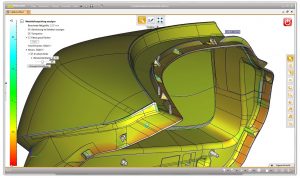 The Viewer can read common CAD formats such as CATIA V4/V5/V6, NX, Creo, SOLIDWORKS, Inventor, STEP, JT and others.

German-French software manufacturer CoreTechnologie (CT) has further developed the Analysis and Viewer software 3D_Analyzer. The new tool provides comprehensive analysis functions for 3D models, according to the company. The 3D_Analyzer Viewer has been designed to analyze wall thicknesses, undercuts and demolding angles as well as to calculate projected areas of components and assembly groups of complex plastic parts.

In the Viewer, the wall thickness check also detects areas with heavy changes in wall thickness. Due to the automatic calculation of the projected area, the clamp force and thus the machine design can be determined with just a few mouse clicks without any CAD knowledge, according to the company.

Analysis functions are supplemented by geometric model comparison to indicate differences between models of different formats. Additionally, for DMU examinations, there is a function to determine collisions in assemblies as well as to calculate clearances between all single parts or components and all surrounding parts. Furthermore, the latest version enables the creation of exploded views that can also be animated, as well as drawing creation as DWG files.

The Viewer can read common CAD formats such as CATIA V4/V5/V6, NX, Creo, SOLIDWORKS, Inventor, STEP, JT and others. From within the Viewer, models can be saved in JT, CT as well as a PDF file. Floating licenses with a borrowing function enable use of the software within and outside of companies.

Further information can be found at the CoreTechnologie website.