The Center for Collision Safety and Analysis helps automotive, aerospace and transportation industries keep current with simulation and testing methods.

Professor Cing-Dao “Steve” Kan is the director of the Center for Collision Safety and Analysis (CCSA) at George Mason University in Fairfax, VA. He’s been at the forefront of using computer simulation for vehicle crash analysis for two decades.

“CCSA is a neutral technical place where government and industry are working together on technical issues in order to move forward with legislation, regulations or technical specifications. We get everybody on the same page,” says Kan.

The private companies CCSA works with often have plenty of data, but may not have the right data or know the best way to analyze it. CCSA can help on both fronts.

“One [auto manufacturer] came to us because their accident and injury rate was higher than their competitors’ and they didn’t know why,” Kan says by way of example. “They wanted a data analysis, comparing their vehicle with their competitors’ vehicles to give them some input on why their accident and injury rate is higher. So we do those type of analyses.”

Those analyses involve crashing a lot of virtual cars. The data available from physical crash testing is, in some ways, surprisingly limited. A government regulation may specify a vehicle traveling at 30 mph into a rigid wall but, in reality, cars rarely smash head first into rigid walls. They hit trees and utility poles, crash into embankments and sideswipe highway barriers. “We do a lot of simulations to mimic these real-world accidents,” says Kan.

CCSA also works closely with the National Highway Traffic Safety Administration, as well as state Departments of Transportation, providing technical expertise when it’s time to review or update standards. CCSA works with state DOTs, for example, to evaluate the performance of highway safety barriers. “We’ve been using simulation to evaluate different systems,” says Kan. “In that capacity, we work with state DOTs as well as the manufacturers that provide this hardware.”

CCSA’s testing isn’t all virtual, notes Kan. “We currently operate a crash test facility at the Federal Highway Administration in McLean, VA, where we run actual vehicles into different types of barrier systems at up to 80 mph.”

The Aspect of Injury

“That’s exactly the point,” says Livermore Software’s Christoph Maurath, “To predict what the physical test is going to look like, before I build anything physical.” Because physical tests will involve crash test dummies, so should the simulations. Livermore and CCSA collaborate on developing the virtual dummies, which are available to licensed LS-DYNA users at no additional cost.

The next generation of anthropomorphic testing device is a virtual human, with muscles, joints and organs.

“We try to take a holistic view of transportation safety issues,” says Kan. “We look at it from the vehicle’s side, from the highway’s side, and from the occupant’s side.” 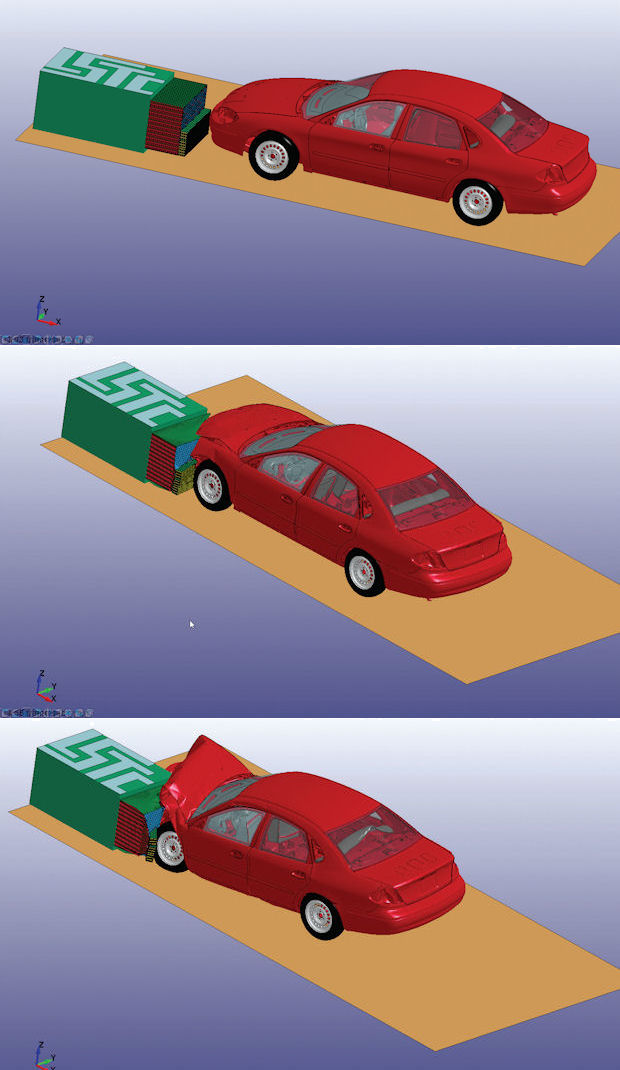 This series of images shows a simulated car crash into a static barrier.

It’s not always done that way, he says. “People who design the highway look at a vehicle as a rigid block of mass smashing into their barrier systems. When people look at the cars, all they care about is that the car is going to smash into a wall based on government test specifications. They don’t worry about hitting trees or other things. And on the occupant side, they are looking at specific mechanical dummies. So when you do engineering analysis, using modeling and simulation, each of these are separate groups of people.”

In contrast, says Kan, CCSA tries to simulate the entire event. “Maybe,” he says, “the vehicle runs into a guard rail or bridge rail. How does the barrier perform? Or maybe the vehicle hits an embankment and rolls over. How is the vehicle performing in these situations? Is it absorbing enough energy? Is the cage protecting you from head injuries during roll incidents? In a side impact, is a utility pole going to cut into the vehicle?

“At the same time, we also look at the occupants. What type of injuries will they sustain? Today, we’re able to use computer simulation to simulate the whole event, to look at all three of these together, using a more integrated analytical approach.”

Staying Ahead of the Curve

“The auto industry is very production driven,” says Kan. “They don’t have time to take care of specific material issues, or integration issues, and that is usually where we come in. We say, ‘Hey—this method is available and cost effective.’ And if they’re interested, we work with them.”

Perhaps an auto manufacturer wants to use an aluminum chassis, but isn’t sure how to simulate the welds, or adhesive joints. “We tell them that we have a new method of modeling all this,” Kan says

Or maybe an auto manufacturer is interested in using virtual humans in their simulation. “They’ll say, ‘You’re using human models,’” says Kan. “We want to give you a project to help us flesh out our in-house methodology, and to migrate from dummy analysis to human analysis.’”

A Helping Hand with Hardware and Software

“On the modeling methodology side, we’re working with hardware and software vendors to help them implement certain features,” says Kan. “For example, we work with LS-DYNA very closely. We constantly implement new features. That’s one of the reasons that auto companies are interested in working with us—to improve methodology, particularly in terms of materials. We develop the models, which are implemented into LS-DYNA. And once hard-coded in there, the features are available to all these aerospace and automotive companies.

“For hardware companies, we look at their system’s performance levels. By running our benchmark models—like three vehicles colliding—we can see what kind of throughput the system is capable of, and help them debug it.”

One emerging problem in the manufacturing industry is the kind of work that OEMs (original equipment manufacturers) are farming out to small and medium size manufacturers, says Cing-Dao “Steve” Kan, director of the Center for Collision Safety and Analysis (CCSA) at George Mason University.

“Today, when Ford goes out for a bid on a bumper, the specification calls not only for the actual parts, but for computer models and simulation results as well,” he says. “Many smaller companies can do manufacturing, but don’t have a dedicated in-house analysis group that can use new, sophisticated software, or the computational resources to do the analyses.”

That’s where NCMS comes in, says Kan, “using our research center and bringing computer software and computer hardware companies together, to help them. It’s almost like an industry consortium.”

Looking ahead, CCSA hopes to focus on the next generation of engineers.

“We want to educate young engineers in the safety field,” says Kan. “We have a specialist education program, so students are coming here specifically to learn about modeling vehicle impacts, accident investigations and government safety regulations. 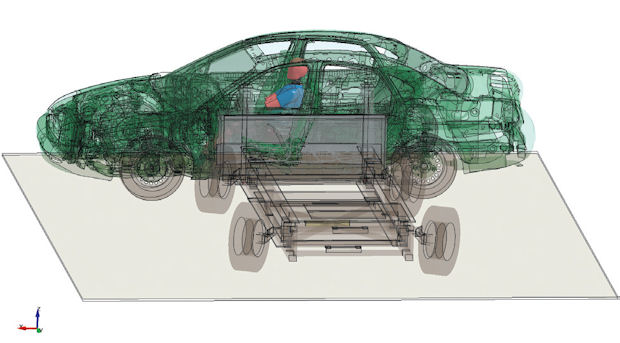 “In the past 20 years, we’ve graduated around 180 students, who are embedded in the automotive and aerospace industry throughout the world.”