During the Siemens Innovation Day in Chicago, the company announced the TASS PreScan simulation solution for autonomous driving systems and held a round table discussion on digitalization. 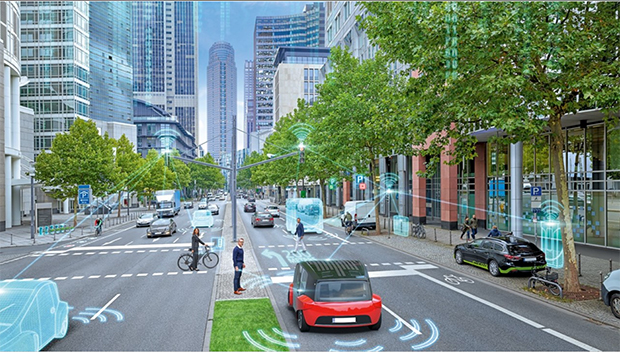 Autonomous driving and its safety was a part of the discussion at Siemens’ Innovation Day in Chicago. Image courtesy of Siemens PLM Software.

Digital Twin Continues to Proliferate Software and Digital Industries
From the ancient Pythagorean Cup to the ultra-modern rocket launchers, all with Simcenter and all...
Digital Twin Resources

During the event, the company announced a solution for autonomous driving systems. The TASS PreScan simulation solution, under the Simcenter umbrella, reduces the need for extensive physical prototyping while cutting how many logged test miles would be needed to show that autonomous vehicles are indeed safe. TASS’ PreScan simulation environment generates realistic, physics-based simulated raw sensor data for an innumerable possible driving and traffic situations, as well as other limits.

“On the software side, automotive has always been in the lead in adoption of technology by far,” said Hemmelgarn about the pace of innovation, specifically citing automotive’s use of technology as it relates to the design and manufacture of vehicles. “But now the quest is more about functional capabilities—is it going to perform the way I want?” If the focus is on drive handling, for instance, “Are the characteristics I put in going to affect other parts of the vehicle? How do I validate that in a virtual world versus how do I produce it to drive? That’s a lot of the work we’re doing in model-based design system engineering,” he added.

Batra, president, Digital Factory USA, touched on the concept of design for manufacturing and a familiar adage accompanying it: “If you don’t design it right, you don’t manufacture it right. Now the technology is there to make it happen,” he said. “Today’s companies are getting more productivity gains, getting to market quick.” He said they are using simulation as a “decisive weapon. If you’re not doing that, you’re not going to get gains in productivity that people can get.”

Hemmelgarn also shared how the “next big thing” in digital disruption pertains to automation equipment. “There’s a tight level of integration to prove out workflow. We can virtually take it from weeks down to days. We can simulate every aspect without any hardware. We can go in the factory, print this and it will run. If you don’t have that tight integration, you won’t be in that space for long. You’re going to be disrupted if you can’t respond quickly.”

During the afternoon livestream, Roland Busch, chief technology officer at Siemens, focused on the concept of digitalization. “Digitalization … is the combination of new technologies, digital technology, and also a new business model, which creates a very explosive mix which is changing many of our businesses in a very fast way and also calling new competitors on the scene.”

Digital solutions with real-world applications for today’s world were woven throughout the day’s events. 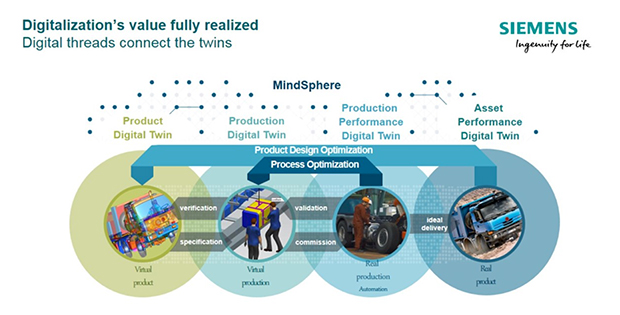 For instance, startup RadioBro, an IoT device maker in the aerospace and aviation arena, shared how it tapped the benefits of Siemens’ digital twin capabilities to shave off time for product development – from months to weeks. Brothers Marc and Eric Becnel started the company after completing a university project to design and deliver small spacecraft. They said it was Siemens’ technology that helped them design more efficiently in a virtual environment, empowering them to compete on the international stage as a tech organization.

Another hot-button topic was that of the safety of autonomous driving, particularly relevant in light of the recent death of a female pedestrian in Arizona who was hit and killed by a self-driving Uber taxi manned by a human operator. Such an instance and the potential for others like it has prompted companies like Siemens to take steps now to ensure that safety remains high priority. Siemens’ Welz spoke on the subject.

“With connected vehicle technology, our road infrastructure will become significantly smarter and safer,” said Welz, of Siemens ITS. In a use case being implemented in Tampa, Welz described how they are tackling the problem of a pedestrian potentially being struck by an autonomous vehicle. “We are using roadside sensors and mobile phone data in order to detect the location of the pedestrian. By applying analytics and meaningful application, we can warn the driver if the pedestrian is stepping toward the (vehicle).”

Lisa Davis, Siemens USA CEO, spoke to the role the U.S. specifically is playing in carrying out digital efforts. “The U.S. has played a key role in our digital journey at Siemens,” she said.

She mentioned the Hendrick Motorsports car from the NASCAR series as an example. “This company uses Siemens software to create a digital twin that allows them to innovate on a weekly basis on a racetrack. This isn’t just about racing; it’s about leveraging digitalization to set up the car on the track,” she explained.

What Siemens has found to date is that few companies leverage this data.

Through the digital journey, Davis said Siemens has discovered, “there are no experts,” as the “best results come from collaboration.”