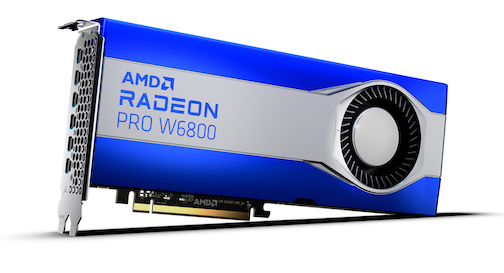 AMD makes available its W6000 line of advanced workstation GPUs for engineering, design and related professional applications. The line features RDNA 2 Architecture, which the company says is the key to these new GPUs being their fastest ever, while lowering power consumption and reducing latency.

“AMD RDNA 2 was designed from the ground up to deliver world-class performance for a wide range of applications and workloads,” says Scott Herkelman, corporate vice president and general manager, Graphics Business Unit at AMD. “Bringing this breakthrough architecture to our workstation graphics lineup allows users to tackle much larger datasets, dramatically reduce render times and speed processing of highly complex models and simulations.”

Viewport Boost is a new feature that increases frames-per-second results in viewports for various applications; the company says this is especially helpful when working with large project files.

AMD says it works closely with all the leading vendors of professional graphics applications, and is certified for use on a wide variety of CAD/CAM/CAE applications; a list of these applications is available here.

These new AMD Radeon PRO GPUs are now available for direct purchase or as included with workstations from various vendors.

More details on the AMD Radeon PRO GPUs can be found here.