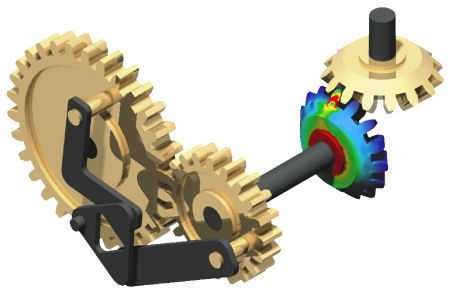 In its DNA, SimWise has a great application known as Working Model 3D developed by an outfit called Knowledge Revolution back in the ’90s. Working Model was ahead of its time. It provided dynamic simulations of rigid body behavior that helped you detect collisions between fixed and free-moving components, such as the interaction among the boom, stick and swing cylinders on a backhoe. MSC bought Knowledge Revolution in 1999 and beefed up Working Model with FEA functionality. Through the miracle of business transformations, DST acquired certain rights from MSC for its discontinued visualNastran 4D software, which DST updated and relaunched under the name SimWise a few years back. And it has been expanding SimWise ever since.

So, what is SimWise? Well, with SimWise, you can simulate the rigid body dynamics of an assembly, size components, determine part interferences and collision response, identify stresses induced by motion, produce animations and even test your control systems. But the best explanation of what SimWise helps you do, in the company’s description, is that it helps you answer the key questions of any assembly design project: “Does it work and will it break?” And it’s intended to do so without a lot of fussing on your part.

SimWise is CAD neutral, so it works with pretty much any model you toss at it. SimWise can read data from CATIA V5, NX and PTC Creo/Elements as well as files in ACIS, IGES, Parasolid, STEP and STL formats.

But for tighter interaction with your CAD system, DST offers plug-ins for Autodesk Inventor, Solid Edge, SolidWorks, SpaceClaim Engineer and, new with version 9.5, Geomagic Design from 3D Systems. The plug-ins provide associative transfers from these systems to SimWise. Version 9.5 introduces functionality that will transfer dimensions and other parameters to SimWise for use as optimization variables. Version 9.5 also brings new capabilities to open Solid Edge parts and assemblies directly.

Other new features in SimWise 9.5 include an updated 3D FEA mesh generator and added support for 3D navigational devices from 3Dconnexion. For existing users, DST reports that the new mesh generator is more robust and faster than earlier versions. With the new mesh generator, the company adds, you can expect quicker results from FEA and motion studies as well as simulations and optimizations that include FEA results.

As for 3Dconnexion navigational devices … well, if you’ve ever used one, you know that they are cool productivity enhancement tools. If you’ve never used one, try one. You’ll wonder why you never gave them a shot before. They work well with your CAD system too.

SimWise is actually two toolsets and a bundle. You have SimWise Motion for kinematic and dynamic motion simulations, SimWise FEA for stress, normal modes, buckling and heat transfer analyses on mechanical parts, and SimWise 4D. The latter bundles all the capabilities of the motion and FEA tools. It gives you an integrated tool for mechanical simulations that also computes the stresses resulting from dynamic loads induced by assembly motions. You can get SimWise Motion and SimWise FEA as standalone products if you want. But the price list I found on the DST website, makes SimWise 4D an attractive deal.

The short of it is that SimWise seems a nifty and affordable product that does what it does well and easily. You can learn more about SimWise 9.5 from today’s Pick of the Week write-up. Links at the end of the main text will take you to some videos of SimWise in action and to a form to request an evaluation unit.