Editor’s Pick: Large-Format 3D Printer Has Over 22-In. Build Height

How to Configure the Right Engineering Workstation
Learn how key workstation components can impact engineering productivity, and what factors to consider when...
Editors Pick of the Week Resources

Dear DE Reader: Airwolf 3D Printers is an interesting outfit. For example, spend a little time nosing around their website and you'll see that they have a touch of sass and a taste for sly turns of phrase. But more interesting than that are the reasonably priced, well-tricked-out desktop 3D printers they make. They are just beginning to roll out their new EVO 22 Large 3D Printer/Additive Manufacturing Center. Let's take a look. It sounds like a big deal. 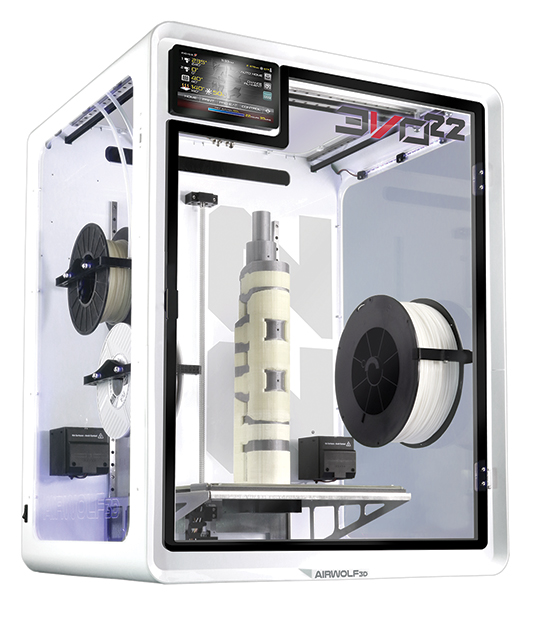 Largeness ends there, however. The EVO 22 weighs 75 lbs. and its vital measurements are 36x28x24.5 in. (HxWxD). Its high-efficiency particulate air (HEPA) and carbon air filtration system works to contain ultra-fine particle (UFP) and volatile organic compound (VOC) emissions, so you can have it near you on a desktop or workbench. Since it has see-through sides and on the top, you can watch it do its thing, too.

The EVO 22 is housed in a one-piece aluminum frame. Essentially, its weight and rugged construction mean that you can move this unit around from cubicle to workbench or plunk it down in a harsh environment.

This is where part one of “manufacturing center” comes in. See, you can stack up to four EVO 22s and build a small, large-part making 3D print factory. Part two: The EVO 22 Large 3D printer will let you work with more than 40 different engineering-grade materials, including high-temperature thermoplastics, carbon-fiber-reinforced nylon and a stainless steel-based metal filament. Its build process uses a proprietary heating technology called Tri-Heat, which gets play in today's write-up. For now, Airwolf says this technology creates smooth parts that exhibit the strength and mechanical properties required for functional prototypes as well as production-ready parts. Some key specs: The EVO 22 has a 100-150 mm/sec maximum print speed (recommended) and 40 micron minimum layer height/180 microns or above (recommended). Its dual-extrusion heads have a 0.4 lb./hour maximum material deposition rate, so it can move along at a good clip. The EVO 22 Large 3D Printer/Additive Manufacturing Center has other interesting things going on, such as technologies that'll resume a job at a point of interruption and touchscreen display operator controls. Hit today's link to learn more. Good stuff. Thanks, Pal. – Lockwood Anthony J. Lockwood Editor at Large, DE