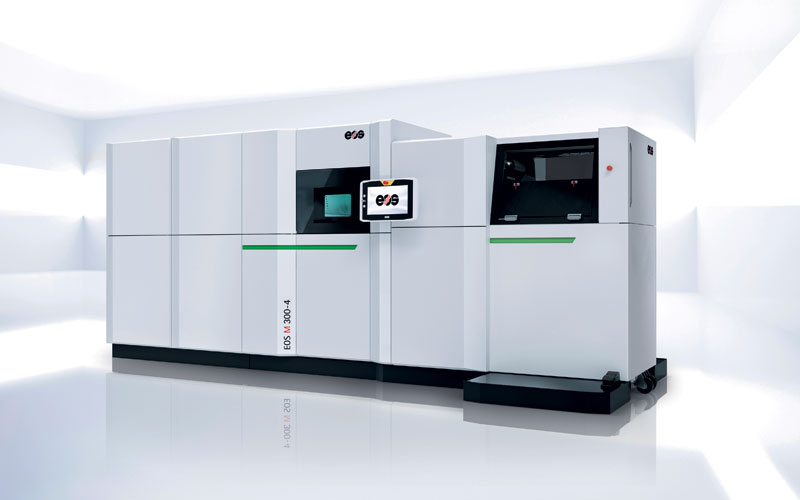 The EOS M 300-4 marks the premiere of EOS’ new series of DMLS additive manufacturing systems. The series features a configurable and scalable architecture and models with one, two or four lasers. Image courtesy of EOS GmbH.

EOS has developed industrial 3D printers for about 30 years. They've become a top-of-mind name when it comes to metal additive manufacturing (AM) systems, which is not to knock their polymer 3D printing creds. But it's metal that makes today's Editor's Pick of the Week worth checking out. See, EOS has just introduced the first unit in its new series of metal 3D printers. It's called the EOS M 300-4.

M 300 is the designation for this series of Direct Metal Laser Sintering (DMLS) AM systems. They're designed to handle jobs in aerospace, automotive, medical, tooling and more. The primary characteristic across the series is that it leverages a modular platform that's configurable and scalable for 24/7 production.

What that means is that the EOS M 300 series offers solution choices, such as units with one, two or four lasers or with various multi-power laser configurations. You can get a system that's powder contact-free to keep the health and safety standards people relaxed. Three clamping systems, two powder dosing options, different types of recoaters. You get the idea: Setup is flexible to your production site.

In addition to being the first of its line out in the world, the automation-ready EOS M 300-4 AM system embodies the characteristics that likely will define its siblings. For example, it introduces an integrated permanent filter system. No more popping the machine open for filter changes, which should result in processing longer jobs without interruptions.

The EOS M 300-4 sports four lasers and a roomy build volume of 11.8x11.8x15.8 in. EOS reports a scanning speed of up to 23 ft. per second. The lasers will be able to offer variable laser power sources in the future, according to EOS.

The EOS M 300-4 deploys a technique called full-field overlap with four scanners. As EOS explains it, this means that the lasers can hit all spots on the build plate, which gives you full build orientation flexibility. Compared to its mid-frame predecessor, the system should be more productive by multiple factors, which should also reduce cost per part.

Production-level metal additive manufacturing is coming on faster than the holidays. And learning more about the EOS M 300-4 sounds like a good way of understanding why this is happening. Hit today's link to get started. Make sure to check out the video on its dedicated landing page. Good stuff.