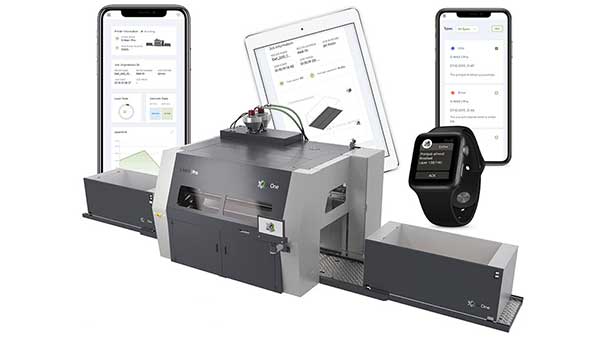 The Scout app is part of a feature-rich web-based program that can deliver push notifications to smart devices about job status, printhead speed, fluid levels, temperature, humidity and other actionable manufacturing data.

Versions of Scout are available for the Google Android and Apple iOS mobile platforms. MindSphere OS is also used as the operating system of the two printers.

“ExOne Scout is an important step forward as we work to deliver on our vision for smart and sustainable 3D printing technology at production volumes,” says John Hartner, ExOne CEO. “We plan to surround our high-speed binder jet 3D printers with a complete end-to-end digital workflow in the future. While our 3D printers remain the centerpiece, we’re looking to streamline the entire sequence of digital manufacturing around our systems with automation, software and remote monitoring and controls. ExOne Scout is a step toward delivering a complete digital manufacturing package.”

ExOne says future Scout releases will enable layer monitoring and analysis by camera, as well as other artificial intelligence and analysis features.

More information on the Scout app is available here.