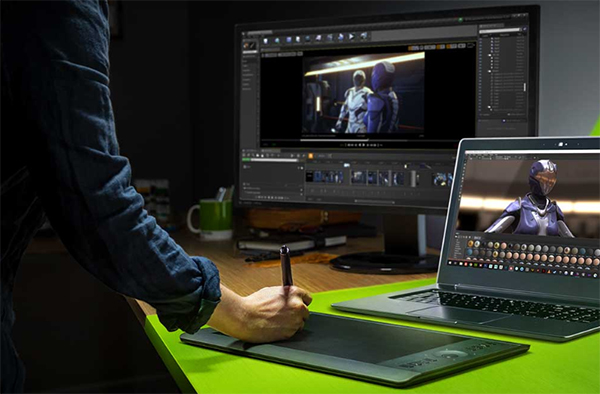 BOXX Technologies has a reputation for being the computer workstation equivalent of a master mechanic who turns street cars into racing machines. When NVIDIA stunned everyone earlier this year with the RTX specification for advanced ray tracing and artificial intelligence (AI) development, BOXX was ready on Day One with an RTX Studio notebook. The new GoBOXX SLM-17 is fast and slim; this screaming new notebook computer is our Editor’s Pick of the Week.

The second specific is what BOXX has done with the RTX Studio specification. There is a lot of power residing in a slim package. GoBOXX SLM is only 0.69-in. thick and weighs less than 5 lbs. BOXX says it is the thinnest laptop it has ever built. GoBOXX SLM is available standard with a 17-in. display running full HD (1920x1080). A 15-in. version is also available. The brain of it is an eight-core Intel Core i9 (i9-9880H), supported by 32 GB of RAM and a variety of storage options. A Core i7 version is also available. The GPU is the NVIDIA Quadro RTX 4000, the notebook computer version of NVIDIA’s new ray tracing racehorse.

NVIDIA claims RTX Studio technology will boost visualization tasks by up to 12x faster. BOXX recommends the GoBOXX SLM for use with applications including Autodesk 3ds Max, Maya and AutoCAD; Siemens Solid Edge; and Dassault Systèmes SolidWorks and Catia.

Check out our Product Brief for full system specifications and more details on the RTX Studio specification. Thanks for reading; we’ll be back next week with another Editor’s Pick of the Week.

DE’s editors contribute news and new product announcements to Digital Engineering.
Press releases may be sent to them via DE[email protected].