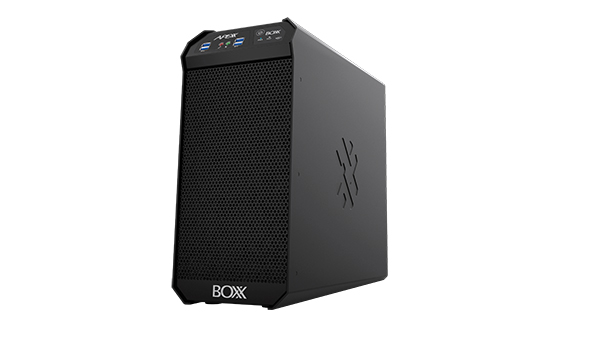 BOXX Technologies has introduced its new generation of APEXX S-Class workstations. Among their key features are overclocked 9th-generation Intel Core i7 and Core i9 processors. Image courtesy of BOXX Technologies.

Start your CAD, modeling, rendering and animation engines. BOXX Technologies has rolled out its new generation of workstations. They're primed for design jobs. Workstations that can scream through design applications are in BOXX's genes, so it's worth a look at what they've done.

BOXX's new S-class APEXX workstation line offers customizable models, the APEXX S3, the APEXX Enigma S3 and the APEXX S1. They're all built for the tools you toil with—stuff like AutoCAD, Inventor and SOLIDWORKS.

Here's where it gets interesting. You build S-class APEXX workstations around a 9th-Gen multi-core/multi-thread Intel Core i7-9700K or the Core i9-9900K CPU. You're talking up to eight cores and 16 threads.

Now, among other things, BOXX specializes in CPU cooling technologies. This means that they can safely overclock the CPUs for maximum performance. With the APEXX S-class workstations, they've overclocked the Intel CPUs to achieve clock speeds of up to 5.1GHz.

And that's not a burst of speed. It's sustained across all cores, according to BOXX. That means more heavily threaded applications like rendering and GPU computational work should become extra perky.

BOXX calls the APEXX S3 the flagship unit. It's the workstation to eyeball if your workflows require a full-size GPU for light GPU compute or virtual reality in addition to CAD, image processing, animation and the like.

There's little mystery about the APEXX Enigma S3 machine. It's the one that's built to speed up professional-level modeling and CAD applications to the max. It and the APEXX S3 can handle up to three GPUs and can be built around the eight-core/16-thread Core i9 CPU overclocked to 5.1GHz.

The APEXX S1 is intriguing. It's petite—4.70x8.60x9.13-in. (WxHxD)—yet can handle demanding jobs like 3D content creation, CAD and motion media. It runs the eight-core Core i7 processor overclocked to 4.9GHz. This is the unit to look at if workspace is tight and your graphics needs are modest.

Today's write-up has more details on the S-class APEXX workstations. Visit BOXX's landing page for an interactive tour of their hardware as well as an overview video. Make sure to play around customizing a system while you're there. Good stuff.