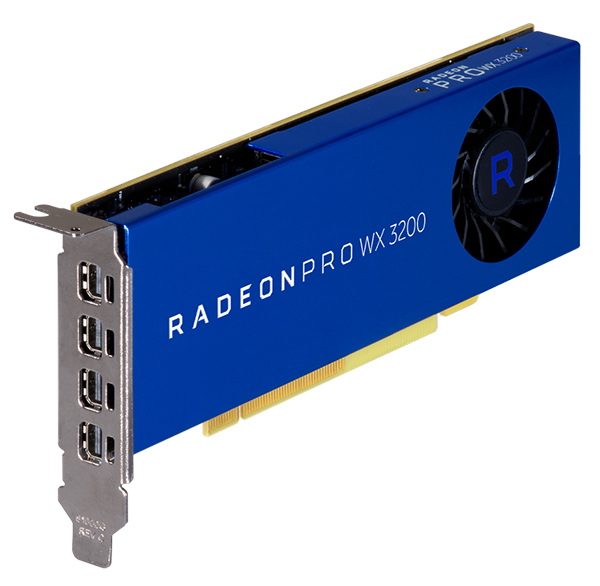 Many engineers obsess over cars ... muscle cars, Formula 1 racers, exotic sports cars and more. But very few engineers own the objects of their obsession. Instead, they end up buying more practical vehicles. The same sort of obsessing is common for engineering workstations. The latest high-end workstation sounds amazing, but most engineers have modest requirements.

AMD has built its business offering CPUs and GPUs (graphics processing units) that redefine the power/performance dynamic in favor of average users. The company understands not everyone needs to calculate wind shear effect for a 787 flying through a hurricane in real time. AMD’s newest GPU is designed specifically for the great majority of engineers and product designers, which is why the AMD Radeon Pro WX 3200 graphics card is our Editor’s Pick of the Week.

The WX 3200 is designed specifically for compact-sized workstations, which are growing in market share. That small form factor comes with a small price, around $200 standalone. A variety of boutique and mass market vendors—including BOXX, Dell and HP—have announced new workstations using this new GPU.

The WX 3200 represents the fourth generation of AMD’s Graphics Core Next (GCN) architecture, a complete rework of CPU technology that reinvigorated the company’s business when first launched. It runs graphics and arithmetic instructions in parallel and supports GDDR5 memory, required for fast performance.

Design visualization is becoming an important part of manufacturing workflows. Product development teams are often creating virtual reality content, physically based renderings and animations, and real-time visualization. Using multiple monitors makes this work go faster. Graphics industry analyst Jon Peddie coined a phrase describing the value of multiple monitors: “See more, do more.” AMD took that mantra to heart when it invented its Eyefinity Technology, a multi-display technology that simplifies multiple monitor use. The WX 3200 includes Eyefinity, allowing it to output to three, four or even six displays. The 4K and 8K monitors are supported.

For you speed enthusiasts, the WX 3200 offers 1.66 TFLOPS peak performance. That‘s a whopping 33% faster performance compared to the previous generation AMD model. Some might even be tempted to buy the WX 3200 just for its looks, specifically its YInMn Blue case, a deep cobalt blue with surprising properties in heat dispersion.

We don’t have room here to describe more great features such as the use of open source kernels and standards for maximum utility or the 10 compute units and 64 stream processors. You can get the full details in this week’s Product Brief.

Thanks for reading. We’ll be back next week with another Editor’s Pick of the Week.