The electric vehicle (EV) market is expanding. Frost & Sullivan’s most recent EV market outlook shows that sales are set to grow from 1.2 million units in 2017 to 2 million in 2019, major original equipment manufacturers (OEMs) such as Ford and Fiat Chrysler have big plans to expand their EV fleets over the next several years, and a number of start-ups are entering the market.

Although EVs have existed for decades, growth in the sector means that automotive engineers will face new challenges when designing for them. This will require more than just swapping out an internal combustion engine with an electric motor—there are complex engineering issues to overcome.

“A lot of engineers who grew up in the mechanical world now need to address the fact that a once-mechanical part is now a complex electrical mechanical device that is controlled by software,” says Dave Lauzun, vice president of the automotive and transportation industries team at Siemens PLM Software.In some regards, EVs are simpler than gas-powered vehicles because there are fewer moving parts—fewer complicated gears, bearings and other elements that govern the interaction between the powertrain and the rest of the vehicle. An ideal EV would have motors on each wheel.

However, the subsystems within an EV have introduced different types of complexity and design challenges that automotive engineers have not had to work around before.“Each of these systems—the battery, the motor, the power electronics—comes with its own challenges that the auto industry is not familiar with,” says Sandeep Sovani, director, global automotive industry, ANSYS. “Batteries, for example, have been used in other industries, but the automotive use case is pushing them beyond the existing performance envelope. There are new complexities because of that.”

Because the vehicle design is now arranged around a battery and one or more motors rather than an internal combustion engine, the design space is much larger and more varied than before. Engineers need to approach analysis and simulation from the system level because of the way different physics affect each other in these vehicles. “They really need to drive the whole product development effort from a model-based approach,” Lauzun says.

“Engineers need to look at the complexity more at the systems level, and bring more systems together earlier in the design process,” says Warren Seeley, director, powertrain, at Siemens PLM Software. “That is a mindset change.”

As a result, engineers are turning to more multiphysics solutions and have a greater reliance on simulation and virtualization. It is much more expensive to build prototypes of these experimental EVs, so automakers are increasingly turning to simulation and other types of virtual testing before advancing to the prototype phase. 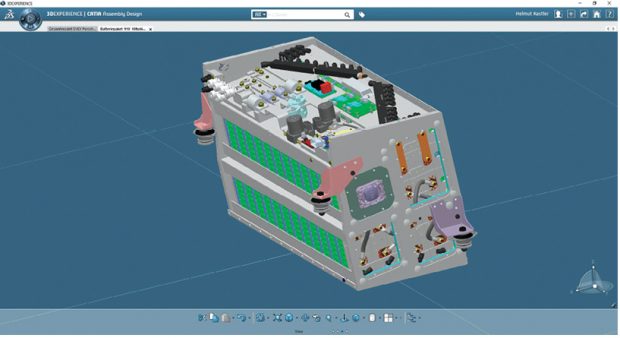 Dassault Systèmes says its 3DEXPERIENCE platform can be used to model the battery from the initial chemistry all the way to how it operates within the vehicle as a system. Images courtesy of Dassault Systèmes. 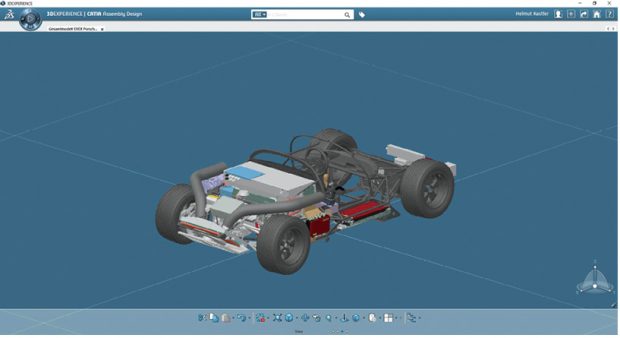 “Building prototypes is less feasible,” says Wensi Jin, automotive industry manager at MathWorks. “Since simulation supplements design, you have a better design methodology and you can accomplish much more in the simulation space.”

Mitsubishi Motors, for example, deployed a hardware-in-the-loop (HIL) simulator from dSPACE for the electrical control units in its i-MiEV vehicles (which includes five dedicated electronic control units). Other companies have turned to augmented or virtual reality to test cabin interfaces.

This type of simulation also helps with the enormous amount of software design required for EVs. “That’s one of the benefits of using model-based design,” Jin says. “You can do the software design as part of the simulation and run it against the vehicle model. You can generate the code that runs in the vehicle based on the actual simulation rather than going by the specifications. Customers tell us that the time savings with model-based design and code generation is as much as 30% and can even go higher than that.”

For EV engineers, there are a number of new and evolving challenges that electric cars present.

According to Sovani, one of the biggest is the battery design. For EVs to truly become mainstream, they need to match the performance and ease of use of gas-powered vehicles in range and time to refuel—or, in this case, recharge. That simply isn’t possible with current battery technology, and engineers are wrestling with ways to bring EVs closer to that reality.

“Developing materials that can hold more charge or that can be charged and discharged without degradation is a new challenge,” Sovani says. “Figuring out the right geometry of those cells is a challenge from multiple perspectives. There’s a big thermal aspect to that, as batteries are extremely sensitive to temperature.

Furthermore, cooling and temperature control require a different approach than with gas-powered vehicles, and integrating these structures into a vehicle requires having accurate models of the battery and other sub-systems. For batteries, that may mean the use of simulation at the microscopic level to analyze how a battery cell performs. “There are good techniques, linear time and video techniques, that can be used to capture the thermal behavior of a battery and accurately put that into a model with hardly any degradation in accuracy,” Sovani says.

At Dassault Systèmes, the company has the capability to model the battery from the initial chemistry all the way to how it operates within the vehicle as a system, explains Michael LaLande, director for the North American transportation and mobility industry. “There are many conditions we can test for so we can even see how the battery will age,” he says.

Noise, vibration and harshness (NVH) testing is also evolving to meet the needs of these vehicles. EVs produce less motor noise, but that lack of noise has uncovered other types of noise in the vehicle that had previously been masked.

“We’re all used to the powertrain covering up a lot of sins when it comes to NVH,” Lauzun says. “Everyone is struggling with the unique challenges of NVH because of the motors and conventional noises that are more prevalent now, like wind noise and other noises in the vehicle.”

Software use has gone up exponentially in EVs, which can be very difficult to manage when it comes to system-level simulation and design. The electrical architecture can also present a challenge.

“The engineers are not necessarily used to working with batteries, electric drives and motors,” LaLande says. “Some early adopters even purchased off-the-shelf electric motors, but they’ve been determined to not be durable enough to work in the automotive environment. Now [engineers] are developing their own electric drives and motors. They aren’t used to working with fluid flows within motors, electromagnetism and how that may interfere with other parts of the vehicle.”

With continued electrification in the vehicle, the use of multiphysics simulation has also become more important. In an electric motor, electrical, magnetics, fluid, thermal, structural and acoustic elements are closely interrelated.

“We understood where the industry was going and made an aggressive effort to fill the gaps when it came to the EV space,” LaLande says. “We can now provide multiphysics across disciplines so companies don’t have to use multiple sets of tools. They can solve for three or four disciplines using one tool.” 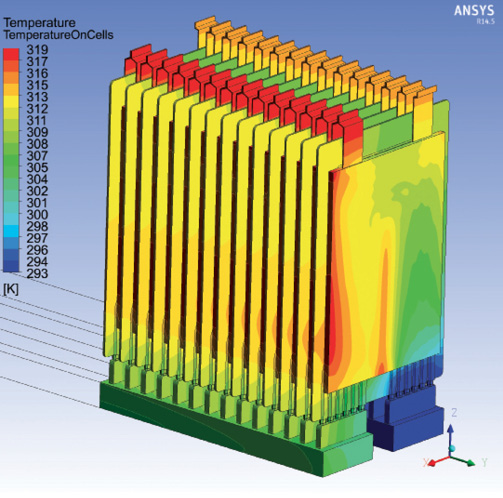 ANSYS simulation tools can be used to measure temperature on battery cells. 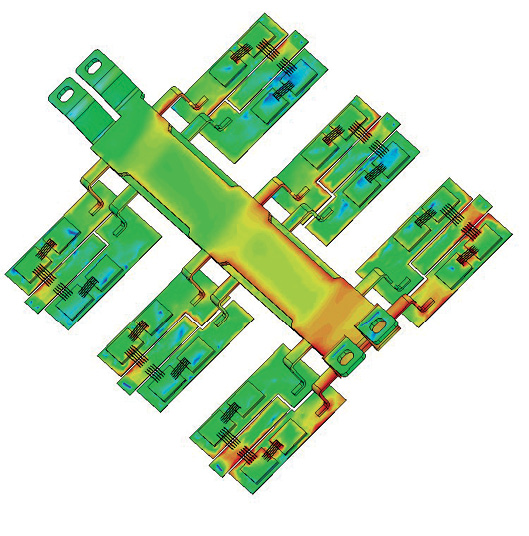 ANSYS simulation tools can be also be used to measure current density. Images courtesy of ANSYS.

While software vendors are making it easier to perform multiphysics simulations, engineering departments also have to change their processes and culture to improve integration.

ANSYS is pushing for more model-based systems engineering for such multiphysics simulations, and co-simulation of hardware and embedded software.

Lucid Motors in Menlo Park, CA, worked with ANSYS on its own EV design. The company’s process involved putting all of its engineers in one room to encourage collaboration, and using the ANSYS Workbench platform for multiphysics simulation. By performing electromagnetic analysis, fluid and thermal simulations, engineers were able to optimize the oil and water coolant systems simultaneously in less time.

Earlier this year, Volkswagen broke the Pikes Peak Hill Climb record with its Volkswagen I.D. R all-electric racing vehicle. The company developed the car in just eight months. EVs can accelerate quickly, but once the battery heats up, performance falls off. VW solved that problem without adding weight by using air cooling instead of water cooling. VW worked with ANSYS to simulate the virtual drive tests of the entire race to optimize the battery cooling system and aerodynamic drag loss.

Engineers are performing more simulations throughout the design process, and relying on tools that can give them flexibility in fidelity and compute resources. Early work may require faster simulations with lower fidelity as designers settle on the basic vehicle architecture. The fidelity of the models increases as they delve further into the vehicle systems.

Augmented reality is also coming into play when testing these vehicles because of the continued electrification of the human-machine interface. The cabin controls are highly electronic in these vehicles. Newer models use different types of interfaces, like projecting information on the windshield, that also require testing. “In developing these displays and interfaces, there is more of a need to use virtual reality and visualization techniques, light simulation and other approaches,” Sovani says.

As more of these highly electrified and increasingly connected vehicles hit the road, they will create a wealth of operational data that can be used to further optimize models and make improvements.

“With vehicles running around the world you have data streaming in,” MathWorks’ Jin says. “How do you speed up the process of getting from data to insight? We are providing the ability to allow our users to be able to process data as it comes in, running an analytic script using MATLAB on the cloud or in a cluster, and get the information design engineers want.”

There are still a number of emerging needs software providers will target over the next several years so that EV designers can access more functionality. There needs to be improvements in the ability to predict battery life, additional thermal analyses of the batteries as more energy density is pushed through them and availability of more complex functional safety analysis tools, as well as ways to simulate the effects of stresses on the magnetic properties of the motors, according to Sovani.

“There are stresses built on the edges of these components, and those stresses have a significant impact on the magnetic behavior of the materials,” Sovani says. “There is a need for in-depth simulation to look at those manufacturing stresses and their magnetic properties.”

There will also be a need for more electromagnetic interference (EMI) simulation. “As we move toward autonomous vehicles, that is a need that is only going to grow,” LaLande says. “We need to understand how the vehicle will interact with internal and external sources of EMI.”

As more start-ups enter the EV market, there will also be more simulation and virtualization of new manufacturing processes, plant configuration, alternative materials and non-traditional vehicle architectures. These newer companies aren’t saddled with existing facilities and processes, and will have an advantage when it comes to production innovations.

“They are really pushing the envelope on how to do things differently,” Siemens PLM Software’s Seeley says. “They don’t have to follow the rules that have been in place for 50-plus years. It will be interesting to see how things will evolve.”