S3P and M2.COM offer open standards proposals for Internet-aware products and the sensors inside them. 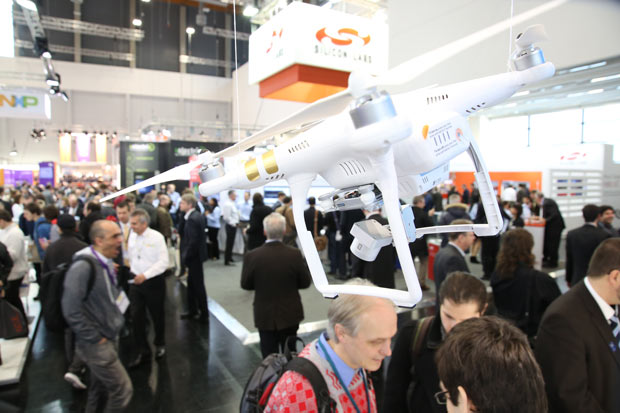 Drones were a popular and recurring theme at Embedded World 2016. Several vendors flew them through the halls during the event. No mid-air collisions were reported.  Image courtesy of NuernbergMesse/Frank Boxler. 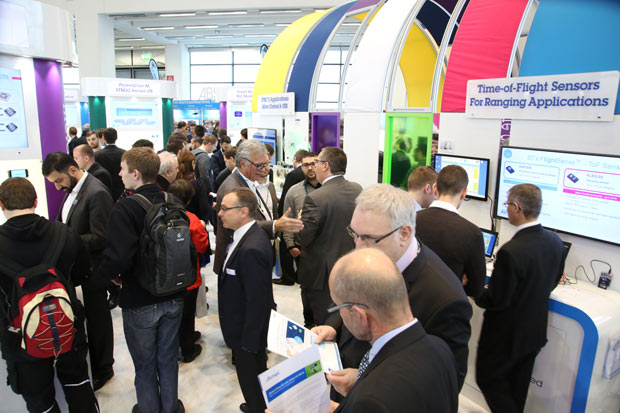 More than 30,000 visitors packed Nuremberg Messe for Embedded World 2016. More than a third of the 939 exhibitors came from outside Germany. Most conference sessions were in English Image courtesy of NuernbergMesse / Frank Boxler.

The recent Embedded World 2016 conference and trade show in Nuremberg, Germany, saw the presentation of two standards-based proposals for creating Internet-aware products and the sensors they will require: the S3P Alliance (for Safe, Secure and Smart Platform) for Internet of Things (IoT) products, and the M2.COM consortium for IoT sensor development. Both initiatives are born of the common understanding that everyone needs to learn from the lessons of recent history by cooperating on the foundational technical fundamentals and compete on the distinctive promises of each vendor’s IoT-aware products.

How big is the market? Gartner Research says there will be more than 1 trillion connected devices by 2040. Gartner also foresees manufacturers investing $166 billion in IoT technology by 2020. Competing research firm IDC has its own numbers; the global Internet of Things market in 2014 totaled $655.8 billion and will grow to $1.7 trillion by 2020. IDC also says the number of IoT endpoints (connected devices including cars, watches, refrigerators, oil platforms, and “everything in between”) will grow from an existing base of 10.3 billion devices in 2014 to more than 29.5 billion devices in 2020. The market will divide into consumer-facing and business-facing products, with a wide variety of both end-user and industrial applications. It is into this milieu of opportunity that both S3P and M2.COM propose their solutions.

S3P was announced December 2015 in Paris, but the alliance’s first meeting and press conference was at Embedded World in Nuremberg. The goal of the S3P Alliance is to define a common IoT software development platform that will enable “rapid deployment and exploitation of IoT-capable devices and applications, combining unprecedented safety, security, agility and portability.” S3P is led by Esterel Technologies, a wholly owned subsidiary of ANSYS. A wide variety of technology developers and industrial users are also involved including CEA Tech, Krono Safe, SYSGO, Airbus, Alstom, Axa France, Freescale Semiconductor, Schneider Electric, STMicroelectronics and Thales. The Alliance has received a three-year funding grant from the French government. 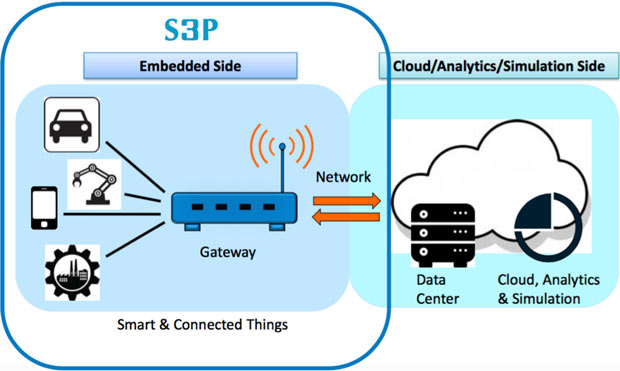 The goals of the S3P Alliance: Smart connected things operating with a feature-rich cloud. Image courtesy of S3P.

The goal is to create a technology and development stack as an open and interoperable ecosystem for all emerging IoT platforms. The focus is on standards for security, industrial safety, agility/portability and IoT platform development.

The technology vendors and the industrial users are working out the details in a series of use cases. Examples include air traffic control on distributed platforms (Airbus); rail signaling on next-generation platforms (Alstrom); secure gateway for 3D printing (Freescale); and an e-health platform (Altran).

“The creation of S3 Platform, Project and Alliance is a key contribution to building a smart, safe and secure software development and execution platform for the worldwide deployment of IoT,” says Eric Bantegnie, CEO of Esterel Technologies. “It also contributes directly to the objectives of building a comprehensive digital trust solution for the development of the economy.”

S3P describes the fundamentals of IoT as:

Nicknamed “Android for machines” by the French media on its introduction, the S3P initiative is less an operating system and more a description of distributed processes supporting millions of nodes operating with high autonomy and security. “We want to design something smart, safe and secure. It must trust the data and the data environment,” says Bantegnie.

Sensor technology is a key aspect of IoT adoption. If manufacturers have to choose which communications protocols and sensor types to adopt before they design new products for the Industrial Internet of Things (IIoT), progress will suffer. With this as the backdrop, a group of leading sensor industry vendors presented their proposal for a new IIoT sensor platform, M2.COM, at Embedded World. 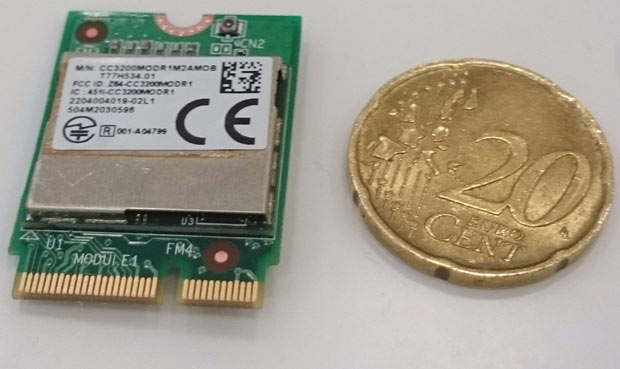 The M2.COM sensor form factor is about the size of a coin.

The M2.COM open standard for an IIoT sensor platform has some major players behind it: Advantech, ARM, Bosch Sensortec, Sensirion and Texas Instruments. The proposal calls for a physically interchangeable sensor body that combines wireless, computation and networking in a form factor about the size of a coin. It is based on the existing M2 shape (22x30mm), also known as NGFF for next-generation form factor. The founding companies will share the M2.COM name and invite others to join their efforts.

Under the M2.COM proposal, companies will develop their own sensor boards based on the needs of their product. Part of the design will be to add an M2.COM-standard plug-in. The M2.COM board will provide the intelligence and radio/network connectivity. The M2.COM edge connector is standard-based; the edge connector is 2230 M.2, 75-position interface supporting a wide set of signal protocols:

The goal is for manufacturers to develop custom sensor boards that work with the M2.COM board. “You no longer need to put everything into one sensor but can develop M2.COM and your carrier board separately,” says Jeanne Forget, vice president of Marketing at Bosch. “We believe that through the collaboration of these competent partners the M2.COM open platform will become a strong driver for sensors in IoT markets.”

The M2.COM founders cite these statistics and also point to the pervasive need for sensor devices, which will gather, process and transmit all of the data manufacturers and customer alike can use. “Data collection will be one of the main challenges for IoT,” says Miller Chang, VP of the Embedded Computing Group at Advantech. “Sensors, wireless technology and embedded computing will be the three major core abilities for data acquisition. With this standardization, we envision M2.COM will accelerate IoT sensor device deployment.”

Olivier Monnier from Texas Instruments Sensors sees a simple formula behind the enormous opportunity. “There are tremendous amount of applications to be created in the Industry 4.0 space. Find the information, compute it, and send it to the cloud. To accelerate the change and new business opportunities created by the IoT, it’s important to have a platform that saves development time and cost with a standardized sensor interface, like M2.COM, where developers can connect anything anywhere,” he says. 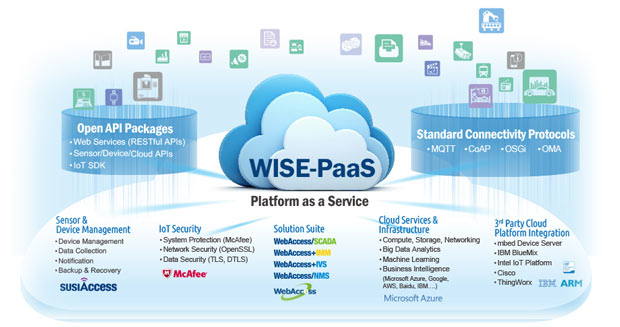 The underlying software infrastructure is based on WISE-PaaS, a partner program launched by Advantech in 2015. It is a mix-and-match approach to creating a platform as a service, supported by a wide range of hardware and software developers including Microsoft, IBM, McAfee, Cisco, PTC ThingWorx, ARM and WebAccess.

The WISE-PaaS approach is agnostic regarding operating systems; real-time operating systems (RTOS) from Wind River or other vendors (or variants of Linux) are compatible. For engineers, the benefits include immediate certified wireless, a starter kit of sensor features that are IoT-ready and, more specifically, Cloud-ready.

Recent history teaches that digital technologies thrive as commercial products when standards are widely adopted. Without standards, many innovations fade away for lack of sufficient adoption, not for lack of inherent utility. Today a digital frontier exists in manufacturing with the IoT. A wide variety of software vendors and electronics manufacturers are bringing products to market, in hopes of being the successful first-mover in a hot market. What is needed to ensure the widest possible acceptance is open standards for common problems the industry faces in creating IoT products. Innovation can then be delivered without the artificial maze of proprietary approaches.