In attendance at the recent CAASE (Conference on Advancing Analysis and Simulation, cohosted by NAFEMS and DE, June 5-7) was Dr. Gary Wang, CEO of Empower Operations. An ASME Fellow, Wang is also Professor of Mechatronic Systems Engineering at the Simon Fraser University, Vancouver, Canada.

Wang and his colleagues believe the time is ripe for CAD-embedded optimization. So they went after what seemed like the largest pool—SolidWorks CAD users—with a plug-in called OASIS.

You can use OASIS “to build a list of parameters on your existing SolidWorks models, allowing you to get started with rapid iteration quickly and easily,” according to Empower.

Third-party developers like Empower are not the only ones who recognize this emerging market. Many high-end general-purpose simulation software makers and CAD software vendors—including SolidWorks—are in a race to get CAD users to embrace their optimization tools.

Explaining how OASIS works, Empower writes that it “connects to most simulations easily and seamlessly through plugins. Some simulations require use of our powerful and easy-to-use input file reader and output file editor, and some rare exceptions require custom scripting to integrate.”

OASIS itself doesn't come with simulation solvers. Instead, it relies on the simulation tools inside SolidWorks to compute and solve the optimization setup. OASIS first scans the CAD model to identify variable dimensions (length, height, etc.), then present them as a checklist for the optimization. This step is where its tight integration with CAD offers the greatest benefits.

The list offers an easy way to set up the optimization conditions. By checking and unchecking the desired values, you let the software know which dimensions are to be preserved as-is, and which can be experimented with. (For example, the center of a flywheel is to be preserved, but the number of holes on its surface can vary.)

Afterwards, OASIS displays optimization results in a plotted chart, showing the correlations between parameter changes and design success or failure in degrees.

OASIS is also available as a plug-in to ANSYS, to set up a connection between ANSYS Workbench and OASIS. Like the SolidWorks plug-in, the ANSYS plug-in let you set up optimizations using Workbench models. It's listed in the ANSYS App Store. 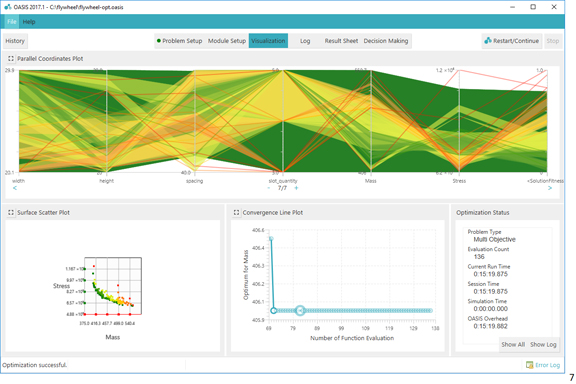 Everyone Wants a Piece of the Optimization Pie

In SolidWorks 2018, users see the debut of Topology Study (part of SolidWorks Simulation Professional and Premium), a set of tools you can use to optimize CAD geometry using manufacturing constraints, among others.

The window of opportunity in CAD-embedded optimization is still open for third-party developers, but they'll have to combat the bigger players to get through.