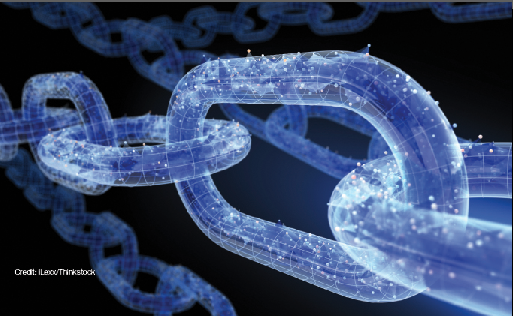 It may sound counterintuitive, but distrust can spawn a trustworthy technology. That idea is in the DNA of blockchain, a transactional infrastructure largely associated with Bitcoin. Blockchain “offers a way for people who do not know or trust each other to create a record of who owns what that will compel the assent of everyone concerned,” according to “The Great Chain of Being Sure about Things” (October 2015, Briefings, The Economist).

The blockchain education site Blockgeeks writes: “By allowing digital information to be distributed but not copied, blockchain technology created the backbone of a new type of internet ... The blockchain network lives in a state of consensus, one that automatically checks in with itself every 10 minutes. A kind of self-auditing ecosystem of a digital value, the network reconciles every transaction that happens in 10-minute intervals.”

Blockchain’s definitions and descriptions are largely abstract. Even for tech-savvy folks, blockchain largely remains a jumble of metaphors and comparisons. Capturing its nature in a few sentences or paragraphs seems nearly impossible. “We have no word, no lexicon to describe it, so we end up borrowing words from other sectors,” says Daniel R. Robles, founder of the Integrated Engineering Blockchain Consortium (IEBC).

Considering blockchain’s association with the volatile cryptocurrency trade, the IEBC’s tagline—“Trust as a Service”—seems extraordinary. But Robles and his colleagues believe engineers will pay a hefty price if they don’t pay attention to blockchain’s potential, especially its implication to data security.

The Handshake Between Strangers

It’s important to understand that the term blockchain describes a type of registry network—not a specific registry. Therefore, there are many different blockchains that are derived and spawned from earlier versions. The well-known blockchains include Steemit, Hyperledger, Counterparty and Bitnation. Blockchains, just like cloud computing clusters, can have both private (controlled by a single company, accessible only to its partners, customers and employees) and public (controlled and monitored by a community) versions.

“If blockchain becomes the norm in digital transactions, the impact is dependent only on the creativity of people using it,” observes Robles. Its impact may be felt by both the geometry creation and modeling disciplines (governed by CAD, CAE and CAM software), as well as the enterprise and product lifecycle data management sectors (governed by enterprise resource planning, product lifecycle management, product data management and other software).

“What blockchain does really well is finalize a transaction between the parties, like a digital contract,” says Robles. “If both you and I have a copy of that contract, it’s difficult to prevent one of us from tampering with it and changing it. Computers are very good at duplicating and changing things. So it could be difficult to tell which copy is the valid contract. A blockchain prevents that.”

That explains its appeal to those in the finance, insurance and other transaction-centric, contract-driven industries. It may also be applicable to construction and engineering projects, where design concepts need to be signed off and stamped, digitally or manually.

“Many blockchains are being applied to finance and insurance because they are simple ‘paper’ swaps that represent a real thing, but are not actually a real thing. On the other hand, engineering information has real intrinsic value, so the opportunity in our profession is enormous,” says Robles.

Blockchain for Engineers, by Engineers

The IEBC states that its goal is to create “a decentralized knowledge inventory for the infrastructure, energy, transportation and construction engineering professions, allowing engineers to shift from a collection of centralized silos into a self-aware global network to adjudicate physical risk in real-world systems.”

It’s launching CoEngineers.io (coming soon as of press time), described as the first blockchain designed by engineers for engineers. CoEngineers.io is intended to be a public blockchain accessible by anyone and managed with game mechanics, though maintained by the IEBC.

“Suppose you post an idea on CoEngineers.io,” proposes Robles. “If later, someone copies your idea, you can use CoEngineers.io to prove to a standard that’s acceptable in the court of law that you came up with it first.” CoEngineers.io may function like any registry of verified engineering information such as a professional engineer stamp, observation of physical state or even a prior art citation in a patent application, he adds.

“The blockchain is an incorruptible digital ledger of economic transactions that can be programmed to record not just financial transactions but virtually everything of value.”

—Don & Alex Tapscott, authors of “Blockchain Revolution: How the Technology Behind Bitcoin is Changing Money”

“[Blockchain] offers a way for people who do not know or trust each other to create a record of who owns what that will compel the assent of everyone concerned.”

—“The Great Chain of Being Sure about Things,” The Economist, Briefings, October 2015

“Picture a spreadsheet that is duplicated thousands of times across a network of computers. Then imagine that this network is designed to regularly update this spreadsheet and you have a basic understanding of the blockchain.”

“IEBC will begin by cloning another blockchain called Steemit.com and then modifying it to meet our needs,” explains Robles. “First and foremost, it is a living and breathing blockchain that people can see running—this takes away a lot of the mystery behind the technology.”

The virtual signatories for the blocks of the IEBC’s “proof-of-stake” blockchain, according to Robles, are distributed around the world. “Our blockchain has a three-second block time [that is, it self-checks in three-second intervals]. So, if you want to corrupt our blockchain, you’ll have to intercept the target document and corrupt more than half of our participating servers—the witnesses to the transaction—within three seconds. The likelihood is astronomically small.”

It’s difficult to corrupt a blockchain’s ledgers—but not impossible. On the other hand, the efforts involved make the attempt expensive, both in computation and time. Therefore, it’s not worth attempting unless the possible gain from the ambush offsets the efforts.

The incident follows an April 2017 bitcoin theft, in which South Korea’s cryptocurrency exchange Youbit suffered a $73 million loss. Eventually, Youbit filed for bankruptcy. Both cases were blows that shook investor confidence in Bitcoin, and by extension, the backend transactional framework.

“The hackers hacked the exchange site (bank account), not the blockchain itself, to steal the bitcoins,” points out Mike Fry, analyst firm CIMdata’s director of Manufacturing Systems Engineering Consulting Practice. 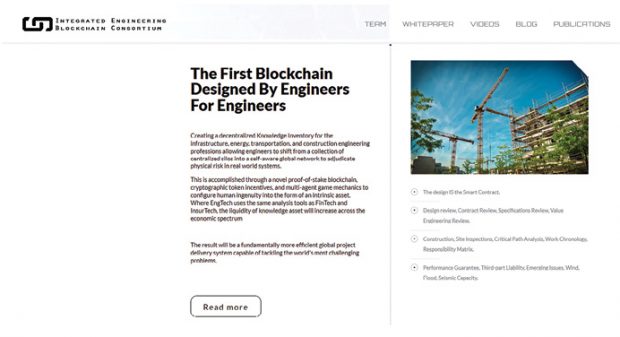 The Integrated Engineering Blockchain Consortium (IEBC.com) plans to launch a blockchain for engineers, by engineers.

“Bitcoin taught us that a decentralized ledger is a feasible idea, and that it works,” says Robles. “Blockchain development is often compared to powered flight where every crash taught the engineers a lesson. It is important to heed those lessons, iterate and try again. The benefits to society of its success are too great to ignore.”

Lessons from the losses led to software engineers developing DEX, decentralized exchanges that are themselves on blockchains. But predictably, there are also other parties scanning and looking for vulnerabilities in the new setup, poised to strike at the right moment.

In February, CIMdata hosted a webinar titled “Blockchain Technology and PLM Usage,” led by Fry. “Each block can be reviewed and audited for approval and access types of transactions,” Fry says. “The trust moves from people and process to algorithms [that govern the blockchain registries], so that will be a major constraint for PLM.” CIMdata aims to set up a Blockchain PLM Knowledge Council, a collaborative research panel of software and services providers.

At the Additive Manufacturing Users Group (AMUG) 2018 that took place in April, blockchain-related product announcements were already being made.

The company says its 3D printing blockchain can solve problems in the 3D printing workflow including:

File integration, IP integrity, DRM: Blockchain technology can be used to track origin of each design file and its evolution.

Facility matching / authentication: Service bureau capability can be stored on blockchain and orders can be pre-verified.

Supply chain and logistics tracking: Once the part is shipped, the package can be tracked to ensure that it is opened by the correct parties.

Real-time data from machines: Machine logs can be stored in an immutable way for forensics during recalls and for traceability, according to the company.

Also at AMUG, 3D printer and software maker Rize launched what it calls “the industry’s first digitally augmented parts,” which “means you can now create a digital thread between the digital and physical part and accelerate Industry 4.0 technologies like blockchain and AR/VR (augmented/virtual reality) applications.”

The company’s Augmented Polymer Deposition (APD) hybrid process combines extrusion and material jetting, allowing parts to be embedded with markers, such as serial numbers or QR codes, as they’re 3D printed to bridge the gap between the virtual and real world.

Fry has been studying Ethereum, among others, as a possible PLM data and process backbone for recording transactions. He favors it because it’s an open source, public blockchain. One use case, for example, is to “make fraud detection easier with product identification. You could verify the [3D printing] machine where a part came out of, [and] verify the program that created the part, to eliminate counterfeit parts,” Fry notes.

Many manufacturers are exploring ways to adopt 3D printing for mass production. With ubiquitous access to 3D printing service bureaus, detecting counterfeit parts produced using the same production method could prove challenging. Fry’s proposition is one safeguard against it.

The Point of Risk Transfer

In product design cycles, engineers have now come to accept simultaneous changes as a fact of life. Gone is the traditional workflow where each party finishes a single part, then hands it off to another. Today, the mechanical engineer, electrical engineer, system engineer and software engineer all work simultaneously. They use product lifecycle management and product data management systems to keep an eye on what the other parties are doing. The emphasis is on file sharing, not file locking. Could such a change-heavy environment be right for blockchain?

It may not make sense to record every micro design iteration in a blockchain, but “perhaps introduce a version to the blockchain when it reaches the stage-gate phase,” proposes Fry.

“You can use blockchain to manage the points of risk transfer,” says Robles. This could be the point where specific versions of the design are released for manufacturing or delivered to a partner in completed assignments.

“Remember, blockchains are electrons,” Robles warns. “At some point, there needs to be a way to verify that the physical state of the world matches the electronic state of the world. This is where engineers will be critical to the advancement of the technology. But like the hacked exchanges, we now need to prove that engineers cannot be corrupted. Decentralization may create a double-blind: transacting parties have no knowledge of the engineer who comes to validate; and the engineer has no prior knowledge of who they are adjudicating for.”

This ignorance by design, if you will, is what makes the blockchain’s involvement valuable as an incorruptible signatory for transactions.

Sometimes, Robles can’t help but feel frustrated by the engineers’ reluctance to explore blockchain or adopt it. “The question is whether engineers will be the innovators of our field or will someone else get there first to further commoditize our work?” he asks. “We have an opportunity to modernize our compensation structure from salary to percent of contract while elevating our profession to the status of financial instruments, but will we organize ourselves to do it?”