The printer is capable of 3D printing more than six qualified metal materials, plus ceramics, into dense and dimensionally accurate parts.

The printer is capable of 3D printing more than six qualified metal materials, plus ceramics, into dense and dimensionally accurate parts. 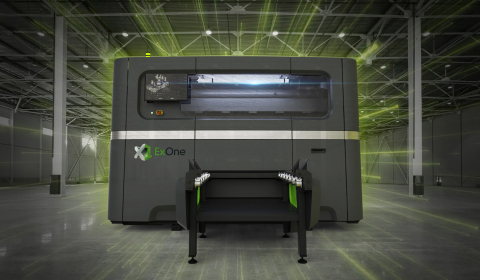 The ExOne Company has revealed debut of its 10th and largest metal 3D printer to date: the X1 160PRO.

“Our technology roadmap has been leading us to this machine for more than two decades,” says John Hartner, ExOne CEO. “At the same time, the X1 160PRO was also designed in response to growing demand from automotive, defense and aerospace customers. We’re incredibly proud of what this model means for the future of metal 3D printing and sustainable production of large metal parts without design limitations.”

The X1 160PRO joins ExOne’s growing family of metal 3D printers, which includes the Innovent+, an entry-level system used globally for research, design and small part production, and the X1 25PRO, a mid-size production 3D printer that is large enough for most metal parts manufactured today. The X1 25PRO begins shipping to customers this quarter and was slated to be shown for the first time in Europe in November at Formnext 2019 in Frankfurt, Germany. The X1 160PRO is slated to ship in late 2020.