The EVT team built its concept car from scratch, expanding their design, engineering and mechanical skills as they prepared for the Shell Eco-marathon Americas.

The Saint Thomas Academy Experimental Vehicle Team (EVT) has once again earned an all-expenses paid trip to compete in the Shell Drivers’ World Championship in London, after placing first in the regional qualifying round held at the 2017 Shell Eco-marathon Americas. The top three UrbanConcept teams from each region (Asia, Americas, Europe) are to compete in the Drivers’ World Championship Grand Final on May 29.

“Regardless of how the car performs, this is an incredible opportunity for our team members to test their skills and knowledge while connecting with other hopeful engineers from around the world,” says EVT Adviser Caroline Little. 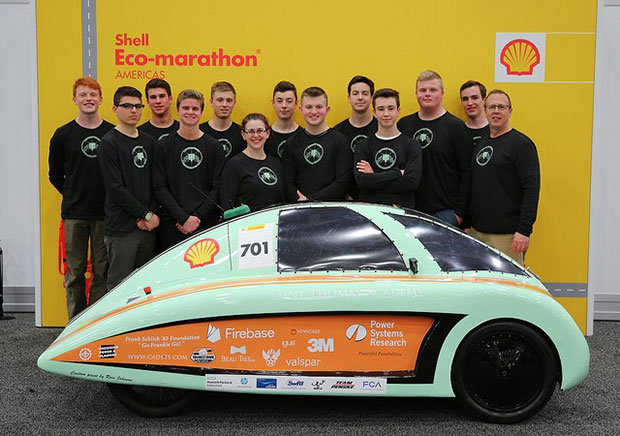 In the 2017 Shell Eco-marathon Americas, the EVT won the UrbanConcept Battery-Electric Category by achieving 50.3 miles per kilowatt hour. A total of 114 teams from universities and high schools from throughout North America, Latin America and South America competed. Each team was required to pass strenuous technical inspections before testing its vehicles on an indoor practice track to ensure it was ready for the outdoor competition. In the actual competition, each team’s car was required to make 10 laps, for a total distance of 6 miles within 24 minutes around a closed-circuit track along Detroit’s downtown streets to record a successful run.

Like all other teams competing, the EVT has built its concept car from scratch, expanding their design, engineering and mechanical skills as they prepared for the Shell Eco-marathon Americas.

For the first time, the EVT designed its car using CAD. After printing the car on paper like puzzle pieces, team members traced the puzzle pieces onto foam that was cut into sections and pieced and glued together to make a full-sized model for the car. They then covered the model with fiberglass to make a negative mold from which the final carbon fiber parts where molded. The new process shaved months off the build process.