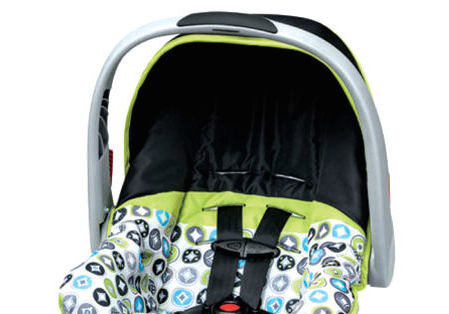 If you have kids, you’ve probably heard of Evenflo Company, Inc. You may have even trusted your most precious cargo to one of the Ohio-based company’s infant car seats, or stopped junior from falling down the stairs with one of the company’s baby gates. The 93-year-old company’s product offerings span a range of infant and juvenile categories. Its products have to be structurally sound, but also aesthetically appealing to compete for consumer attention. The company is always looking for ways to improve both without increasing costs.

“Safety is the key consideration in the design process. Ease of use is also important, but costs must be controlled,” said Andy Davis, senior design engineer, Evenflo CAE.

With solidThinking Inspire shape and topology optimization software, Davis found he could investigate structurally efficient concepts that his industrial design colleagues could use to make aesthetically pleasing designs. Even better, it allowed Evenflo to reduce material costs.

In 2008, Altair acquired solidThinking, allowing it to expand Inspire’s capabilities. Inspire is included in Altair’s HyperWorks suite, which Evenflo was already using.

“Inspire software is included in our licensing, and Altair pointed out it might be something we would be interested in,” Davis said. “Since it was already included in the licensing and had the potential to reduce material usage, we started trying it out.”

Davis was intrigued by the organic shapes that Inspire suggests when using optimizing design topology.

“For us, making consumer products, interesting shapes resonate with our customers,” he said. “We don’t make boxy square shapes. If we could optimize the material and make it an interesting shape for the customer, it would be a win-win.”

Davis showed the software to Brian Pleiman, senior project engineer in the Child Restraint team at Evenflo, who saw it as a potential solution for the perennial struggle of structure vs. design vs. cost.

The pair decided to use Inspire to redesign a car seat handle for an existing product. The handle secures the car seat shell to a seat base or a stroller. The intent of the redesign was to improve the styling and maintain ease without increasing costs relative to the current part.

Getting a Handle on Optimization

To use Inspire, the team needed two things: a package space and a set of static loads for the release handle. As this was a replacement part, the package space was easy to create with a simplified version of the current part in PTC’s Pro/ENGINEER.

“Brian and I talked about the block of material to optimize,” Davis says. “It was very easy to modify the model slightly to get it into inspire and still keep all of  the CAD geometry that could not change.”

The crash and abuse loads that the handle may see during its life are dynamic. This means equivalent static loads needed to be developed for Inspire. Generating approximate loads involved using previous data, making some assumptions and using a few rules of thumb.

“From some of the finite element analysis we have done—we are dealing with a lot of dynamic loads from drop testing and crash testing, for example—so we have grown accustomed to approximating static loads for dynamic situations,” Davis said. “Between myself and Brian, we had a good understanding of the load scenarios that this part would see.”

The design would still be developed in CAD and validated using the standard corporate procedures so that a high degree of accuracy wasn’t essential for idea generation. Inspire also made it easy to evaluate different loading conditions and view their effect through the concept designs generated.

The initial Inspire results showed potential for a 30% mass and material reduction. The result also enabled less measurable benefits. The engineering design team was able to see load paths for the design in Inspire before exporting to Pro/E. The results also provided a place to start a conversation with the industrial design team to ensure the delivery of style and function.

“The industrial designers were pretty excited about Inspire as well,” Pleiman said. “The team we have here likes it when form meets function, and this plays into that.”

Once the design direction was finalized, the part was matured in Pro/E and a 3D printed rapid prototype was built for stroller and sled testing.

“This was a successful project for us. After styling the part, we were still able to achieve a 25% improvement,” said Pleiman. “The quick results we were able to get from Inspire assisted the co-development of the new part between ID (industrial design) and engineering.”

“solidThinking Inspire shows the material that cannot be removed from a design. This helps you understand your design earlier and it can be used as a common language between departments,” added Davis.

Evenflo has since asked Altair for Inspire training session with a larger group of engineers. Now that Evenflo understands the capabilities of Inspire, Davis said they are looking for any place where it might provide material reduction and better aesthetics without reducing quality.