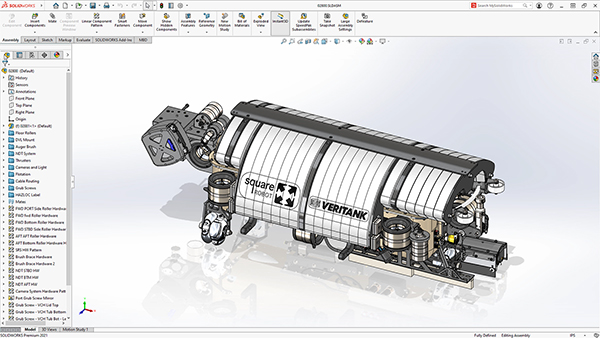 When SOLIDWORKS 2021 was announced last year, its developers emphasized new graphics improvements enabled by GPU acceleration. At the 3DEXPERIENCE World conference last week, presenters went into even greater detail about some of those improvements, as well as hardware recommendations for getting the most out of the solution.

GPU acceleration is now the default setting in SOLIDWORKS 2021. Renderings in SOLIDWORKS Visualize directly leverage the GPU, which has made investing in a robust graphics card essential for optimized performance.

The benefits of GPU acceleration, and how they increase depending on licensing, were apparent in a session that focused on new mesher improvements. 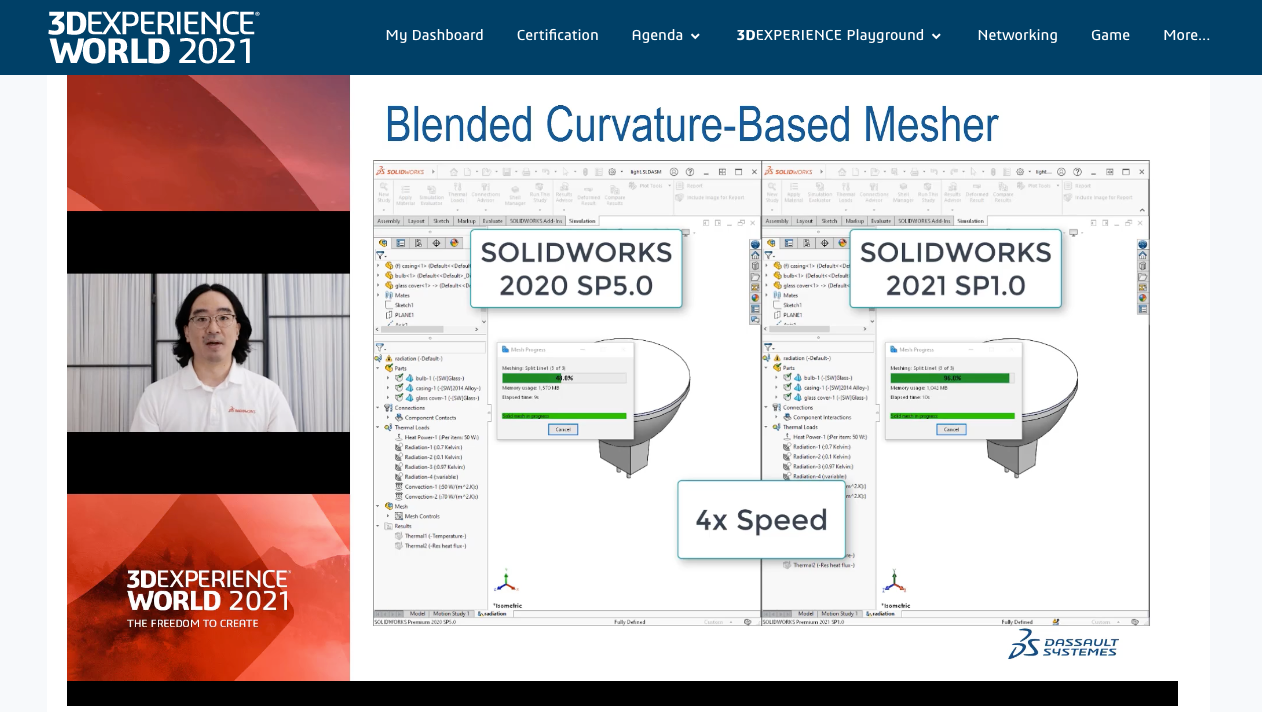 Aaron Aoyama, senior technical customer support engineer at Dassault, explained how the blended curvature-based mesher (BCB Mesher). This mesher traditionally benefited users by successfully meshing models that failed with other meshers. However, as Aoyama explained,  “the tradeoff  has always been that you needed a longer time to perform the mesh compared to the standard curvature-based mesher.”

In SOLIDWORKS 2021, there has been a significant speed improvement thanks to optimization of the code architecture in the mesher for SOLIDWORKS simulation, as well as support for parallel multicore processing and multithreading for the SOLIDWORKS Simulation Professional and Simulation Premium licenses.

“All users should see an improvement in mesh performance compared to earlier releases,” Aoyama says. “Support for parallel processing will give an additional boost for Professional and Premium users, particularly on large models that take advantage of this enhancement.” 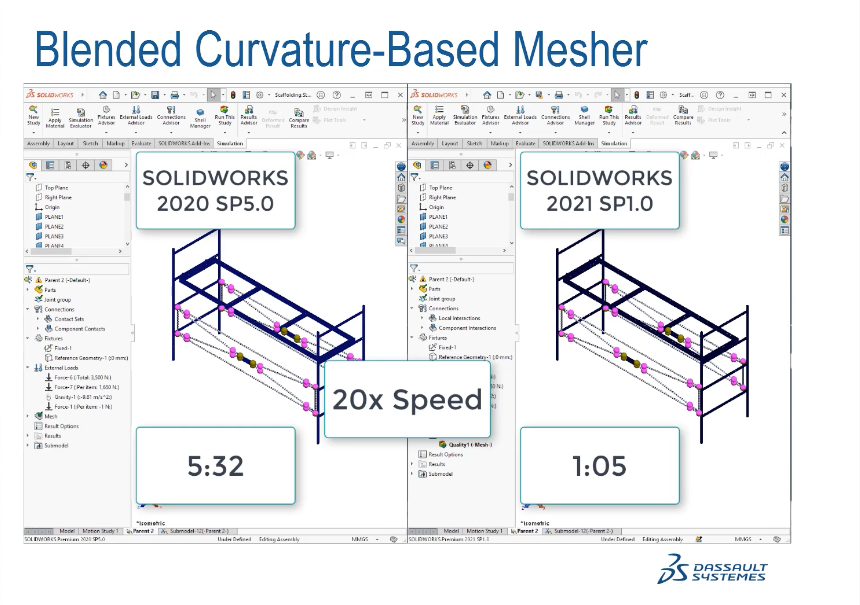 “For large mixed mesh models, there are significant performance improvements in 2021, as well as when using the Premium license,” Aoyama says. “When using the BCB Mesher, performance will vary, but users should see faster mesh times in 2021 across the board compared to earlier releases.”

Parallel multicore processing has also provided solver improvements for users with Professional and Premium licenses. In general, the Intel direct sparse solver and FFEPlus iterative solver have shown improved performance across the board.

According to Aoyama, the time reductions are most noticeable with the FFEPlus solver, particularly with studies that have many surface-to-surface contact interactions.

“While both enhancements show the most improvement with FFEPlus, users can also see improvements with the large problem direct sparse solver,” Aoyama says.

For linear static studies with large amounts of surface-to-surface contact, users could see from 25% to 67% improvements.

The Intel direct sparse solver can now run larger studies with 4 million-plus equations, including many studies that could be run in previous releases. Aoyama said that RAM requirements for studies with high equation counts is large, and the software will use disk space when the memory capacity is exceeded. That can slow down performance of the solver compared to in-core equations.

“While you can solve larger studies, the FFEPlus solver is still typically faster or large degree of freedom problems,” AyoAoyamaama says. 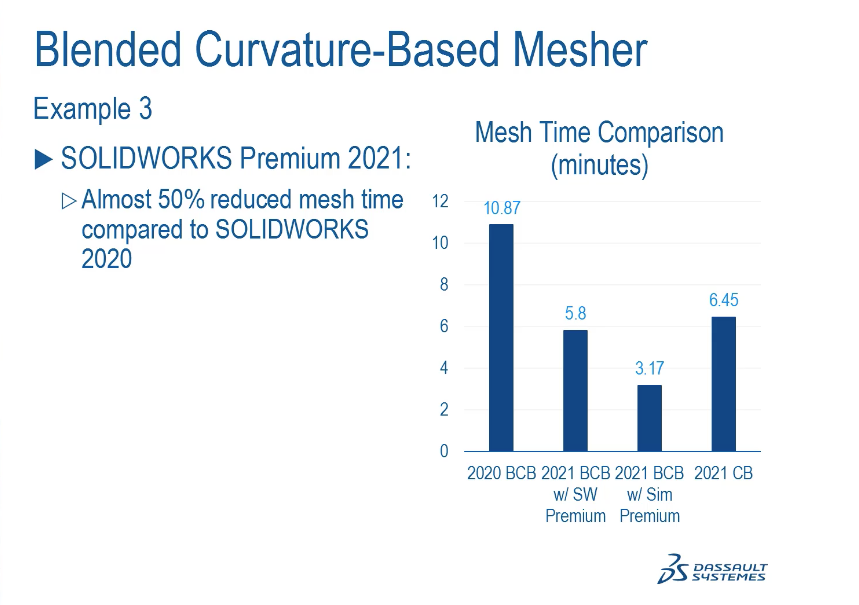 Siddharth Palaniappan, Director of Graphics and Advanced Visualizing, Dassault Systèmes, led an open Q&A on workstation configurations for SOLIDWORKS. According to Palaniappan, developers have diligently worked to remove performance bottlenecks by shifting more computational overhead to the GPU. There will be even more improvements in the 2022 release of the software. When we find bottlenecks, we have found ways to see if that process can be done better on the GPU, he said.

Hardware configuration is largely based on how a given customer is using the software. He said that for users who are loading multiple documents into SOLIDWORKS and working across a huge number of tabs, then large GPU memory is critical. For users working iteratively on single parts of a large assembly could benefit from a larger number of cores.

When asked whether users would get more bang for their buck investing in CPUs or GPUs in 2021, he noted that there is a huge performance improvement with both mid-range and high-end GPUs because of the efforts related to GPU acceleration in the current version of the software. He noted that the best price/performance balance comes from the NVIDIA RTX4000 or P4000, while those with bigger budgets should look at the NVIDIA RTX A6000.

“Look at the number of Cuda cores,” he said. “The higher the number, the better the performance is going to be. We make sure all of the geometry used for rendering is spread across those Cuda cores.”

Dell and NVIDIA recently published a study looking at how GPU acceleration affects performance of the Dassault Abaqus simulation product. That study found that updating to a modern workstation with a GPU enabled completion of the same simulations from 40% to up to 90% faster. You can download the study here. Dell and NVIDIA provided an overview of the study during the event, and also participated in a live Tech Talk on SOLIDWORKS Visualize hardware needs during the conference.

You can learn more about new features and GPU acceleration for SOLIDWORKS 2021 here.