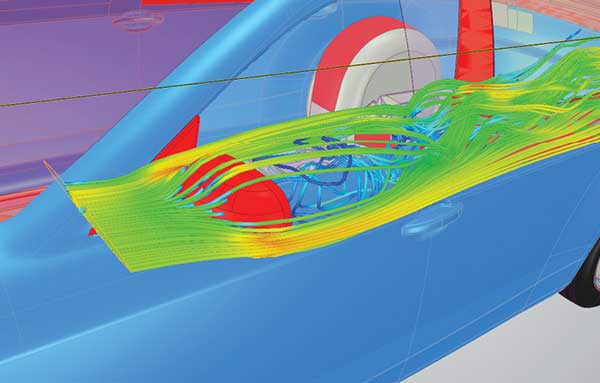 In late 2018 ANSYS and NVIDIA shook the engineering community with the introduction of ANSYS Discovery Live running real-time simulation on NVIDIA GPUs. Today a wider variety of products at mainstream price points are also achieving these capabilities. Image courtesy of NVIDIA.

Siemens’ Simcenter Portfolio for CFD Expands
The latest version includes new functionality allowing designers to use a seamless working environment, and...
GstarCAD Mechanical 2021 Now Released
GstarCAD Mechanical 2021 is designing and drawing software built for all fields of mechanical design and...
Viritech’s Apricale Hypercar Under Development at MIRA Technology Park
Viritech are the latest in a series of automotive innovators to cluster around engineering and...
Creo 8 Tackles Day-to-Day Design Productivity
New release keys in on usability enhancements along with tools for MBE, generative design, and...
More Design

For many years rendering and visualization were a sideshow for CAD and simulation. Usually, a visualization specialist did these tasks primarily for client review and C-suite presentations. As technology advanced, however, realistic views became more incorporated into product development workflow. Most of the change was due to exponential growth in the power of graphics processing units (GPUs), which gained additional processing power at a much higher rate than CPUs.

The uneven rise in processing power keeps changing processes and workflows, from initial design to final manufacturing. Not only can mainstream CAD applications such as AutoCAD and SolidWorks take advantage of real-time rendering, but new uses for CAD and simulation data are popping up, including virtual reality (VR) review sessions.

These changes are fundamentally rewriting business plans as well as engineering workflows. For example, software vendor Luxion has specialized in rendering technology for product design since 2003. Its primary product is KeyShot, widely used by product designers and architects. Co-founder Henrik Wann Jensen was presented with a Scientific and Technical Academy Award for his pioneering work on rendering as used in cinema. For years, Jensen insisted the CPU was the best environment for rendering.

All that changed in July 2019 when Luxion announced it would support the NVIDIA RTX platform for real-time ray tracing, a key rendering technology.

“Our development team was able to quickly show KeyShot with GPU acceleration and [show] where performance could be gained, which further convinced us to move forward with support for NVIDIA RTX,” said Jensen during the announcement.

Today the two largest vendors of GPU technology—NVIDIA and AMD—are both finding a fast-growing market for using real-time rendering in product development workflows. These changes are happening across all levels of engineering technology. Mainstream applications for engineering design and simulation are reaping benefits not possible only a year ago. 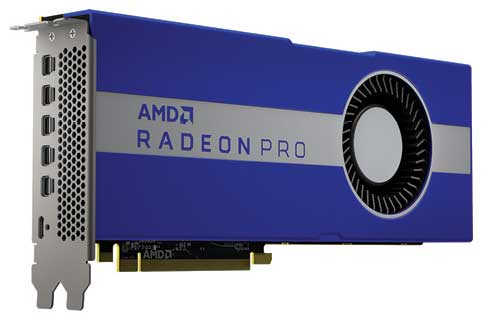 The new AMD Radeon Pro W5500 can render complex simulations and output to virtual reality at a suggested retail price of $399. Image courtesy of AMD.

Today’s most popular CAD and simulation applications were written in an era when single-threaded performance was the norm because it was the only option.

This advice to customers from boutique workstation vendor Puget Systems’ website has been typical for years: “Only 3D models require anything more than a basic GPU… In most situations, the faster the video card the better the performance you will get when working with a 3D model.”

Now vendors are working to rewrite engineering tools to adapt to the rise of powerful GPUs.

“Up until recently, mainstream engineering tools were all CPU-bound on single threads,” notes Andrew Rink, a senior member of the marketing team at NVIDIA. “But now designers and engineers use multiple design tools, and there are new capabilities that require much more graphics acceleration. Someone might be using AutoCAD but want to drop the model into VR or use a physically based rendering tool. This completely changes the dynamic. If someone is thinking about real-time simulation or VR, they need a higher-level GPU.”

“Throughout all design work, we are seeing two trends,” says AMD’s Glen
Matthews, senior manager of product management for workstation graphics. “VR/AR is one. From a graphics standpoint, VR is a little more intense. The other is rendering within design; it shortens the prototype cycle. Both trends are about using visualization to design products faster.”

Dell is noticing two trends in how engineers are using their workstations, says Chris Ramirez, Dell’s strategic alliances manager for manufacturing and construction. There is an evolutionary trend, where engineers are not changing how they work, but where they do the work. “We are now able to pack enough performance into our thin and light mobile workstations,” Ramirez says. “The user is changing the where, not the type of work being done.”

The second trend is revolutionary workflow, not evolutionary. “There are forms of engineering work that didn’t exist 10 years ago,” Ramirez says. “Visualization of design in VR and democratization of simulation are really interesting topics that can drive discussions around GPUs.”

NVIDIA’s Rink points to changes at SolidWorks as an example of revolutionary change. The add-on product SolidWorks Visualize Professional now does more than serve as a “camera” for product images. It can serve as a physics simulation engine on models, and it brings real-time realistic viewing to large models.

“Large assemblies are now a key consideration,” notes Rink. “Fundamentally, the big boost is no reduction in level of detail when working with large models. These are exponential graphics gains, not linear. That’s a big change.”

This level of improved graphics in SolidWorks currently requires RTX technology found in newer NVIDIA GPUs. For many users, this change is an inflection point. “If you were using an entry-level GPU before, maybe now is the time to move up,” says Rink.

Since the dawn of computer-aided engineering, the workflow required product design models be sent to a simulation expert. These experts were the ones with the more powerful workstations—or high-performance clusters. At most companies, the analysis review was a bottleneck in workflow.

Now both the traditional CAD vendors and the simulation-focused software companies are creating pervasive simulation technology that is fast enough and simple enough for non-experts to use.

“A designer can say to an artist, ‘move the fan,’” notes Rink. “This doesn’t skip full simulation at the end of design, but it does connect the silos between design and simulation.” Experts are now getting much more refined models and can speed up final simulation processes.

Generative design is another tool making a difference in the design and simulation process, says Brian Frank, a senior product manager in Autodesk’s Fusion 360 group. “The biggest use of GPUs and Fusion today is generative design.” Because Fusion 360 is hosted in the cloud, the local user is not required to have a powerful GPU. Instead, they can get the GPU power they need from the cloud. “We leverage the right compute resources for the project,” Frank says.

Dell’s Ramirez sees similar trends. “There is a desire for engineers and designers to work untethered to the desk. There is a transition to more mobiles as they become more powerful.” Both NVIDIA and AMD have mobile versions of most GPU products.

“A KeyShot engineer has historically been CPU only,” Ramirez notes. “A Dell customer who makes motorcycles says rendering times have dropped 30 times using GPU-based rendering. We will see more work moving mobile, and those who did it on big mobiles are moving to thinner devices as the technology minaturizes.”

Ramirez says Dell now has three areas of R&D focus for its engineering customers: intelligent performance, mission-critical reliability and immersive productivity. “Everything we do falls under one of these three areas or it doesn’t get funded.”

As the smaller company in the GPU duopoly, AMD sees the same trends in using GPU technology to enhance or rewrite design workflows. It is also using key product differences as it helps customers update their systems.

“Our new 7nm architecture consumes less power on the GPU,” says AMD’s Matthews. The software driving the GPU can adjust to changing requirements on the fly, which reduces the electricity load without affecting performance.

AMD sees “remoting” as a growing trend in engineering, as more companies of all sizes combine a high-powered workstation with a remote connection.

“The office workstation can be high powered and the user can pull up models on an iPad away from the office with nominal loss of performance,” notes Antoine Reymond, AMD’s senior industry executive for design and manufacturing.

“From our data, 70 percent of knowledge workers—which includes designers—are regularly working from home,” adds Reymond. “Our job in this space is to remove unknowns. We don’t expect them to be graphics experts, so we remove the bottlenecks as best we can. It is a stability and quality issue.”

Upfront simulation in design and VR rendering for design review place differing demands on the GPU, says Reymond, but designers have one thing in common. “They all want better rendering, a better way to experience the product.”

AMD has responded to the surging interest in VR for engineering by developing tetherless solutions. “VR is more widespread in enterprise than in mainstream engineering, but adoption is happening. VR in the professional space is a real thing, not a fad,” says Reymond.

The new power GPUs bring to CAD and simulation is driving radical changes in workstation configuration, say the vendors we interviewed. The evolution of more cores in GPUs and CPUs means high-end performance is migrating to the mid-range and entry-level workstations.

This is an example of normal product evolution meeting new needs. “Simulation now has a larger [market] as a result,” he notes. Most of the more available simulation horsepower to mainstream users comes in the form of structural analysis, Reymond adds. “The key applications have been tested for both pre- and post-processing. The hardware is keeping up with mainstream simulation advancements.”

The result is an “increase in where the average designer can get the understanding of the simulation,” Reymond says. “Not necessarily the most accurate, but they can get the trend right, and know the stresses.”

The Move to Virtual Reality

CAD and simulation vendors are making it easier to move engineering content into VR. For example, both SolidWorks Visualize and eDrawings now include rendering models for use in VR. Dell’s Ramirez says an increasing number of their workstation customers “are at the point of understanding the sign-off process in VR.” Collaboration in VR is also growing.

Dell now offers a bundle that combines the Dell Precision 7740 mobile workstation with an AMD Radeon Pro WX7130, a Wi-Fi router, and the HTC Vive professional VR headset. When used in conjunction with a CAD or simulation product and the use of Vive Focus and AMD Relive software, it becomes possible to take a VR experience off-site.

“With no tether, the user can roam the distance of the router signal, and experience the design in full clarity at full scale. No backpack, no tether, no desktop computer,” says Ramirez.

“This is a revolutionary workflow, using VR in design and not just for review. Now add pervasive simulation driven by GPUs,” Ramirez says, and it is a game changer.

Simulation-led design and real-time rendering are capturing attention because the benefits are obvious. Time and cost savings compared with physical testing are a big one. The ability to quickly determine the best initial design to develop and the freedom to digitally experiment with “what-if” scenarios are also advantages.

Mainstream CAD applications are now at the point where they can deliver on these benefits, thanks to the recent innovations in GPU technology and the willingness of software vendors to adapt to these advancements.