High-end 3D printing (aka, additive manufacturing) is fast becoming a fixture in the automotive design process. Now some car companies are trying to use the growing interest in consumer 3D printing to promote their car designs and manufacturing processes.

The latest company to draw a connection between their car designs and 3D printing is Honda Motor Co., Ltd., which recently released the 3D data for the exterior designs of several previously-released concept models as part of its “Honda 3D Design Archives,” campaign. The 3D-printable STL models, based on version 4.0 of Creative Commons licenses, can be downloaded from the Web, allowing interested parties to use their personal 3D printer to create their own novelty version of Honda’s concept cars.

According to Motor Authority, Honda has uploaded five concepts spanning about 20 years. The model are: the 1994 FSR, 1999 Fuya-Jo, 2003 Kiwami, 2007 Puyo, and the  Acura NSX concept car. In addition to letting users 3D print the models, Honda is encouraging them to customize the cars and even improve upon the designs prior to printing. 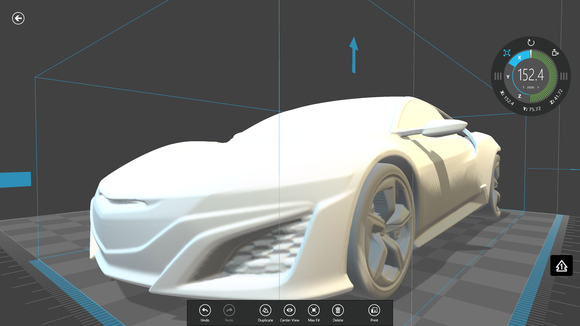 Beyond creating some marketing buzz, Honda also sees the 3D printing initiative as a way to show people what’s involved in manufacturing a car—the goal being to  inspire the next generation of potential car designers and engineers.

“Due to the latest technological innovations and the introduction of affordable household 3D printers, the ‘art of manufacturing’ in society is experiencing fundamental change,” said Honda officials in the press release announcing the 3D Design Archives program. “Against the backdrop of such change, Honda designed this project in an effort to identify new ways of communication beyond the conventional framework between a manufacturer and its users.”

While these efforts are mostly for fun and games, they point to a much more strategic uses of 3D printers in the automotive design process as professional-grade technology continues to come down in price. Instead of 3D printing models of your favorite car designs, it likely won’t be long before consumers and auto mechanics can 3D print commercial-grade replacement car parts, simplifying the maintenance and repair of their vehicles. Companies like Ford are already experimenting in that area.

According to an article it published in December, Ford is already 3D printing parts to represent production components. It envisions a time when car parts will be printed as quickly as newspapers and as easily as pushing a button on the office copy machine—which would save months of development time and millions of dollars. In addition, Ford’s 500,000th printed auto part is a prototype engine cover for the all-new Ford Mustang, and its 3D printing future includes mixed metal applications, continuous 3D sand printing, and direct metal printing.

And just as the big auto makers are successfully flexing their 3D printing muscle, a little-known start-up company is going one step further. KOR EcoLogic, in partnership with RedEye On Demand and Stratasys, is building the Urbee 2, the first road-ready car to be fully produced using 3D printing, which is set to make a road trip from New York to San Francisco in 2015.