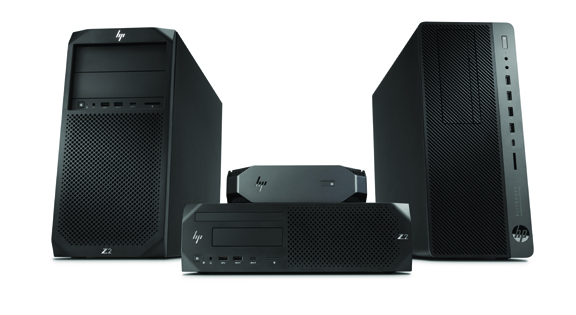 The workstation vendors' efforts to convince casual and semi-professional users to upgrade to workstations have led to the emergence of mini and tiny workstations, some measuring only slightly bigger than an iPad or a hardcover novel.

Furthermore, HP says the Z2 Tower G4 is “equipped to handle demanding 3D projects with over 60% more graphics power than the previous generation,” and the HP EliteDesk 800 is for “PC users who want to upgrade their performance, and have a professional certified desktop.”

The HP EliteDesk PCs are priced roughly between $600 to $1,000. On HP's online store, the EliteDesk 800 Workstation Edition is listed with a starting price of $1,149. GPU options for the Workstation Edition includes NVIDIA Quadro GPUs. “Designed for 2D/3D design and drafting, this SolidWorks and AutoCAD-approved desktop gives users seamless, reliable performance not available in a business-class PC. It,” HP writes.

The Intel Xeon chipset is the standard for professional workstations. However, due to Xeon's power requirements, vendors typically favor running entry level mini and tiny workstations with Intel Core i CPUs. Competitor Lenovo's Tiny P workstation line, for example, is powered by Intel Core i7 processors.

In its press briefing, HP boasts that the Z2 Mini G4 offers “equivalent graphics performance in 1/4 the size of a small form factor workstation.” It can be placed on a desk, mounted on the back of a display, or stacked in a rack, HP's brochure shows. It supports up to 6 displays, and is designed with whisper quiet technology.

The HP Z2 Mini G4 features Whisper Quiet, a cooling function that keeps the unit's operating noises down. “Whisper Quiet was a goal from the beginning of the HP Z2 Mini-series,” said Rogers. “We invested engineering on new approaches and adaptive cooling management for the first mini workstation to enter the market. Making sure that the spacing of each fan blade was slightly wider than normal, allowed us to draw in an adequate amount of air while simultaneously allowing the fans to spin slower, keeping the system cool and quiet at the same time. We also designed in internal baffling to make sure that exhausted air could not be recirculated back into the system and cause unnecessary heat.”

(More on the origin of HP Z workstations here.)

According to HP's press announcement, The HP Z2 Mini G4 is expected to be available later this month, with a starting price of $799.