HP’s latest score on this front is a deal inked with the Guangdong (Dali) 3D Printing Collaborative Innovation Platform, a new production-grade 3D printing center in China. The center, located in the town of Dali, Foshan, a manufacturing hub in the Guangdong Province, will exclusively employ 10 HP Multi Jet Fusion 3D printing systems to serve its customers in the automotive, consumer goods, and motorcycle markets as well as other industries in the Greater Bay Area of Southern China.

The HP printers serve as the heart of the new Lanwan Intelligence—HP Multi Jet Fusion Technology Mass Manufacturing Center, chosen to help usher in a new era of large-scale productivity and innovation using 3D printing technology as the springboard for what many call the Fourth Industrial Revolution. 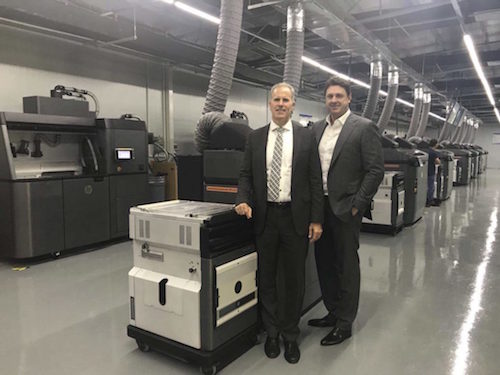 Given that China represents nearly half of the $12 trillion global manufacturing industry and is the second largest economy, HP sees significant opportunity for its 3D printing technology in this market. “HP is uniquely positioned to capitalize on this market because we’ve cracked the code on moving large-scale digital production forward with lower production costs, greater speed, more sustainability, and a collaborative 3D partner ecosystem,” contends Rob Mesaros, head of HP 3D Printing for Asia-Pacific and Japan. “The main takeaway from this announcement is that industrial-scale 3D manufacturing is here and enabling local manufacturers to deliver cost-effective, production-grade parts quickly and efficiently.”

3D printing technologies like the HP Multi Jet Fusion can also help empower distributed manufacturing, another likely hallmark of digital manufacturing in the age of the Fourth Industrial Revolution. As manufacturing is digitalized, software design may occur in one location while the actual production of parts occurs somewhere else, halfway around the world. 3D printing is a way to bring everything together: “HP Multi Jet Fusion technology is a driver of this transformation by allowing manufacturers to 3D print custom parts, create rapid prototypes, and quickly adjust production,” Mesaros says.

To learn more about the Guangdong 3D Printing Collaborative Innovation Platform, check out this video.