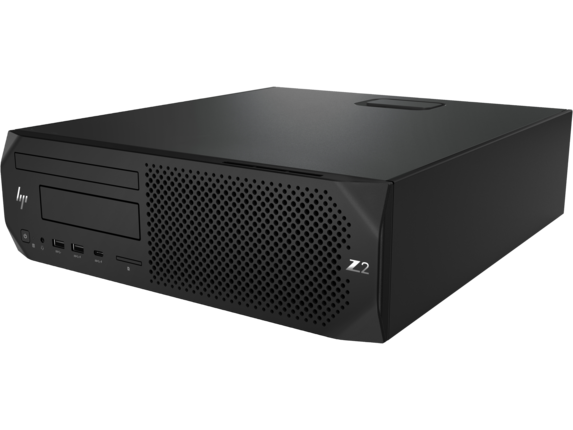 From the outside, the charcoal gray case shares the same esthetics as other systems in the Z workstation family. But the Z2 SFF G4 is smaller than HP’s previous small form factor workstations while providing 50% more processing power than the previous generation.

The Z2 SFF G4 can sit horizontally or vertically and includes a rear shelf for easy gripping. The front panel includes a small power button, hard drive indicator, combo audio jack and a pair of USB 3.0 ports (including one with charging capability). There is also space for options, including a USB 3.1 Type-C port, an SD card reader, a slim optical drive, and a 3.5-in. external/internal drive bay.

The right half of the front panel consists of an air intake grille. An HP logo and Z2 emblem are placed discretely at the far left and right ends. The entire front panel is held in place with eight small magnets and is easily removable to access a dust filter that helps keep the HP Z2 SFF G4 reliable and whisper quiet. Sound from our evaluation unit barely crept above 37dB throughout our testing.

The rear of the case includes a pair of audio jacks, an RJ-45 jack for the integrated gigabit ethernet, two USB 2.0 ports, four USB 3.0 ports and a pair of DisplayPorts dedicated to the integrated Intel HD graphics (for those systems equipped with a suitable CPU). There is also space for an optional wireless local area network antenna, an optional USB 3.1 Gen2 charging port/Thunderbolt 3.0 port for systems that include a PCIe add-in card, an optional serial port and optional PS/2 keyboard and mouse ports. The NVIDIA Quadro P1000 graphics board included in our system provides four Mini DisplayPorts. 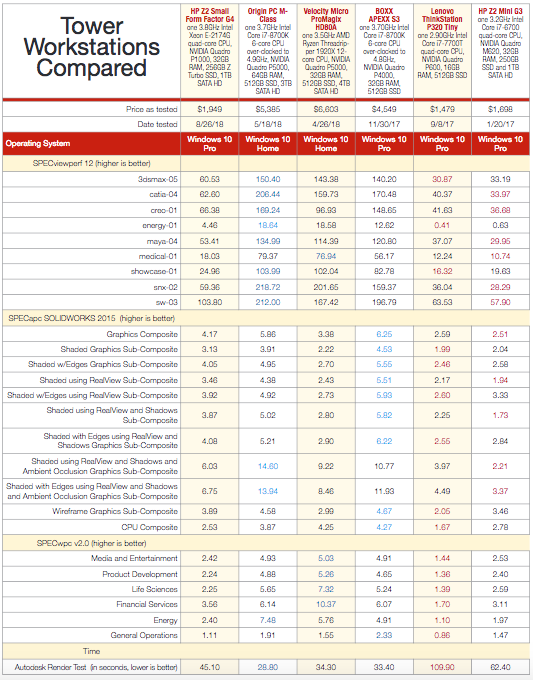 The top of the case is easily removable to access the system’s very well-organized interior. The front portion of the chassis includes four drive bays. In addition to the front-panel bays for the optical drive and 3.5-in. drive, there is a full-size internal bay and a second 3.5-in. bay. The system also supports up to two M.2 HP Z Turbo Drives. HP offers a wide range of internal storage options, including 7200rpm SATA drives from 500GB to 6TB, SATA solid-state drives (SSDs) from 256GB to 2TB capacity, HP Z Turbo Drives ranging from 256GB up to 1TB and Intel Optane SSD drives with capacities of 280GB up to 480GB (when Optane drives become available later this fall). The system we received included a 256GB HP Z Turbo Drive as the boot drive and an Western Digital 1TB SATA data drive, installed in the full-size internal bay.

An HP motherboard is nestled in the base of the case, extending a few inches beneath the drives, but the entire drive bay assembly easily pivots so you can access the entire motherboard. The motherboard provides four memory sockets and four expansion slots. The entry-level Z2 SFF G4 configuration includes 8GB of memory but our evaluation unit came with 32GB of RAM, installed as a pair of 16GB DDR4-2666 error-correcting code (ECC) memory modules. The Z2 can be equipped with either ECC or non-ECC memory and supports up to 64GB of dual-channel RAM (or 128GB once 32GB dual-inline memory modules become available). 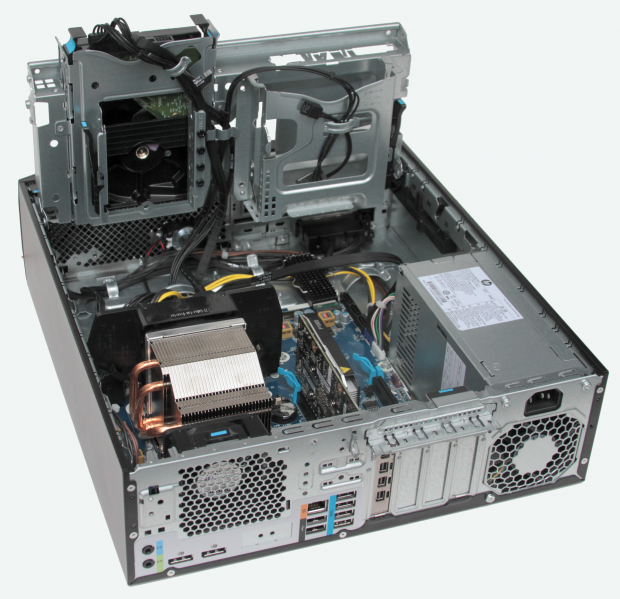 The HP Z2 SFF G4 has lots of rear panel ports and a well-organized interior, with drive bays that pivot to access internal connections. Image by David Cohn.

At the heart of the system, HP offers a wide range of Intel CPU options, including next-generation Intel Xeon and Core processors with up to six cores. Although the base configuration comes with a 3.6GHz quad-core Intel Core i3-8100, our evaluation unit was equipped with a quad-core 3.8GHz Intel Xeon E-2174G. This “Coffee Lake” processor has a 4.7GHz maximum turbo speed and includes 8MB cache and integrated Intel UHD Graphics 630, with a 71-watt thermal design power rating.

We put the HP Z2 SFF through our standard battery of tests and were very impressed with the results. On the SPECviewperf tests, the Z2 SFF G4 performed extremely well, easily outpacing every other entry-level and small form factor system we have tested to date. Its results on the SPEC SolidWorks benchmark were equally impressive.

On our AutoCAD rendering test, which clearly shows the advances of fast CPUs with multiple cores, the HP Z2 SFF G4 completed the rendering test in an average of 45.1 seconds, again easily outpacing all but the fastest workstations.

HP rounded out our evaluation unit with a USB keyboard and a USB optical wheel mouse. Strangely, the keyboard was the only part of our configuration that gave us pause. Instead of a typical utilitarian keyboard, the thin 105-key HP USB Premium Keyboard we received had chicklet-style keys with limited stroke depth, making for a poor typing experience. The system came preloaded with the latest version of Windows 10 Professional 64-bit. 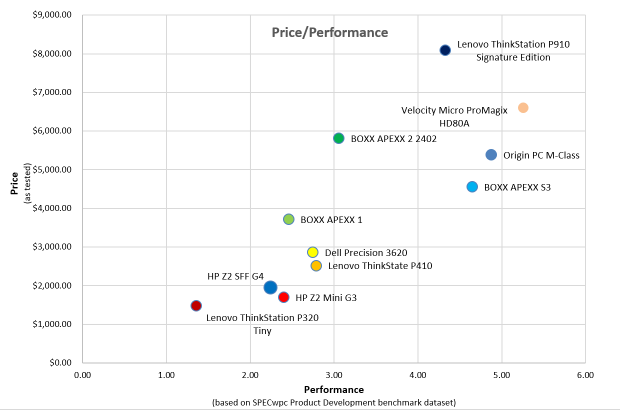