With the new direct drive spindle, the VMXDi series has a better surface finish, quieter spindle and less head growth, the company adds.

With the new direct drive spindle, the VMXDi series has a better surface finish, quieter spindle and less head growth, the company adds. 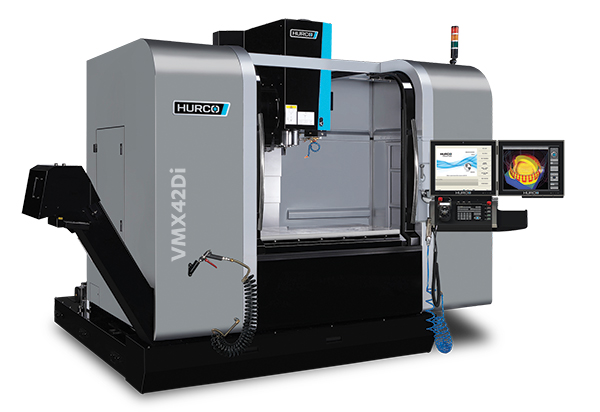 The VMXi series is known for its performance whether customers are running batch production or die/mold work, the company reports. With the new direct drive spindle, the VMXDi series has a better surface finish, quieter spindle and less head growth, the company adds. It also includes a 15,000-rpm spindle, improved chip-to-chip time (2000 rpm, 12-in. Z-travel in 4 seconds), faster spindle acceleration and deceleration (0-15,000 rpm in 3.2 seconds, 15,000 to 0 rpm in 2.4 seconds). T

UltiMotion is the motion control system invented by Hurco that reduces cycle time and improves surface finish quality by determining the optimal trajectory to run the tool, providing consistent programmed feed rates, the company notes. With up to 10,000 blocks of dynamic variable look ahead, UltiMotion can adapt as required by the tool path and achieves fast cornering velocity. UltiMotion is different than the smoothing features offered by CAD/CAM software and improves upon CAM output by providing better handling of the machine mechanics and dynamics, according to teh company. Hurco equips Ultimotion on all Hurco CNC machining centers and it works automatically without any setup required.