Lazarus 3D provides organ models to Baylor College of Medicine and other facilities to help prepare for surgeries. 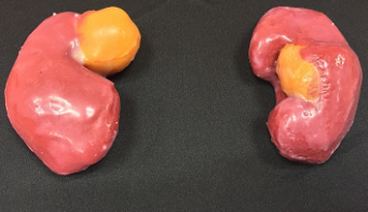 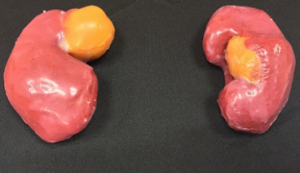 Baylor College of Medicine is using 3D models of patient kidneys to help students visualize tumors and practice difficult surgeries prior to the actual procedure. So far, a dozen patients have had copies of their kidneys printed prior to an operation.

The 3D printing program was enabled by the work of Jacques Zaneveld, a graduate of Baylor’s Molecular and Human Genetics Program, who launched the printing company Lazarus 3D to provide just such surgical models.

“I was fascinated by 3D printers and I quickly realized their potential for use in healthcare, and specifically for training –  however, it took years to develop the technology to create realistic human anatomy models,” Zaneveld said.

Zaneveld worked diligently to find a material that could be 3D printed and that would also mimic the texture of human kidney tissue. Last year, he began creating models using silicone. He sent an initial model to the Baylor urology department, where doctors practiced removing the synthetic tumor with a Da Vinci robot.

After that success, Zaneveld launched Lazarus 3D. The company can create a model of the kidney and tumor, along with the vasculature and other structures. Surgeries near the renal hilum are often very difficult, because of the presence of arteries, veins and the ureter. Having a model helps reduce the likelihood that the entire kidney will be lost.

Lazarus 3D works with the Texas Medical Center and other facilities to provide overnight models of human tissue. The company has also produced liver models and digestive tract models.