We review the first workstation powered by the AMD Threadripper Pro WX CPU.

We review the first workstation powered by the AMD Threadripper Pro WX CPU. 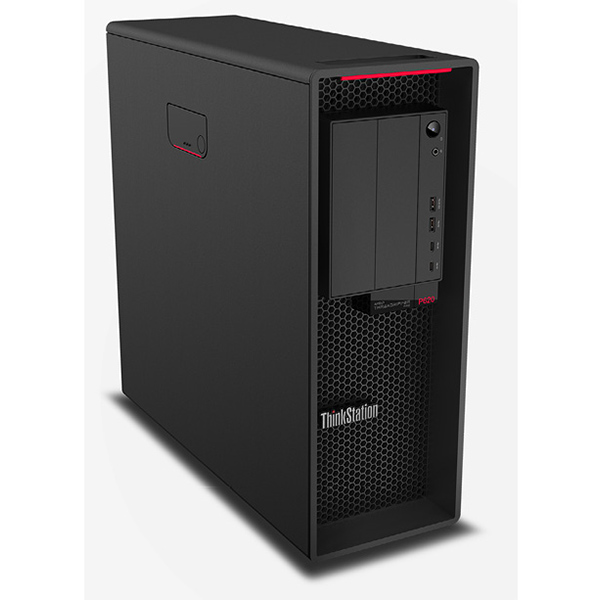 Regular DE readers may have noticed that mobile workstations have received all the attention lately.

In fact, it has been more than a year since we last reviewed any tower-based systems (see “Performance without Breaking the Bank”). It has been even longer since we last received a tower workstation from a major vendor (see “Lenovo ThinkStation P520: Affordable Power”).

So, when Lenovo asked if we wanted to review its new ThinkStation P620, the first workstation powered by the AMD Threadripper Pro WX CPU, we jumped at the opportunity.

The WX designation for the new Threadripper Pro processors is AMD’s way to denote that these CPUs are designed specifically for the professional workstation market. The series consists of four processors. All four support 3200MHz DDR4 error-correcting code (ECC) memory with eight memory channels, 128 PCIe lanes and support for PCIe 4.0.

When first launched in July 2020, Lenovo was the exclusive workstation vendor to offer systems based on the new CPU, although ASUS and Gigabyte have more recently announced several motherboards that support the Threadripper Pro. 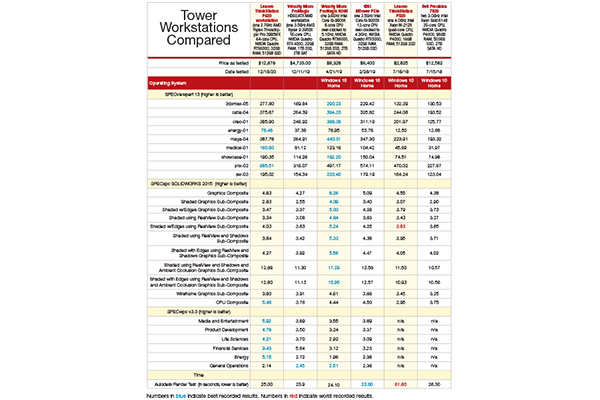 The Lenovo ThinkStation P620 we received came housed in a black aluminum tower chassis similar to other P-series workstations, measuring 6.5x17.94x17.62-in. (WxDxH) and weighing 32 lbs. Handles at the top and rear, identified with red touch points, make it easy to move the system.

The base price of $2,099 ($3,619 before discounts) gets you a ThinkStation P620 system equipped with an AMD Ryzen Threadripper Pro 3945 WX CPU, Windows 10 Pro for Workstations, 16GB of 3200MHz DDR4 ECC memory, an NVIDIA Quadro P620 graphics processing unit (GPU), a 256GB M.2 Gen 3 PCIe solid-state OPAL drive, a 1,000-watt power supply, a keyboard and a mouse, all covered by a three-year on-site warranty. But that is just the starting point. 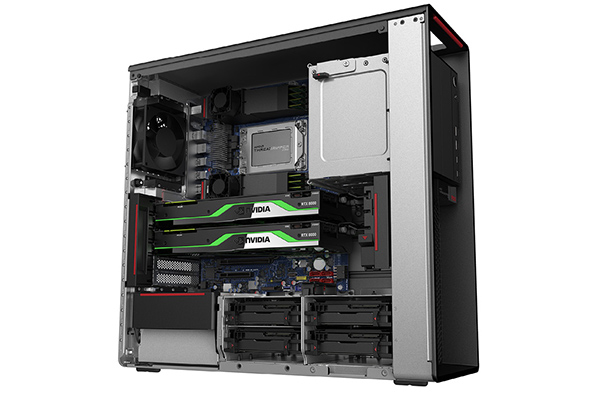 Lenovo ThinkStation workstations feature a Flex module that offers optional storage in front-panel accessible drive bays. In addition to the power button, headphone jack, a pair of USB Type-A 3.2 Gen 2 ports and a pair of USB Type-C 3.2 ports, the Flex module in the system we received housed a slim DVD-RW drive and a 15-in-1 media card reader, options that added $25 and $40, respectively.

Like other ThinkStation P-series workstations, red touch points indicate where to grasp components that require no tools to remove. For example, to access the interior of the P620, you simply press and then lift a red lever, which releases an entire left side panel.

Inside, red touch points let you remove fans, drive bays, the power supply and other components. Drive bay trays accommodate either a 3.5- or 2.5-in. drives. Additionally, blind connections enable drives to connect directly to the system’s backplane, which eliminate the need for cables.

The single air-cooled CPU is concealed beneath a custom-designed heat sink, which is flanked by two banks of four registered dual-inline memory module (RDIMM) sockets, each of which has its own small cooling fan. The ThinkStation P620 supports up to 512GB of RAM using eight 64GB registered RDIMMs. 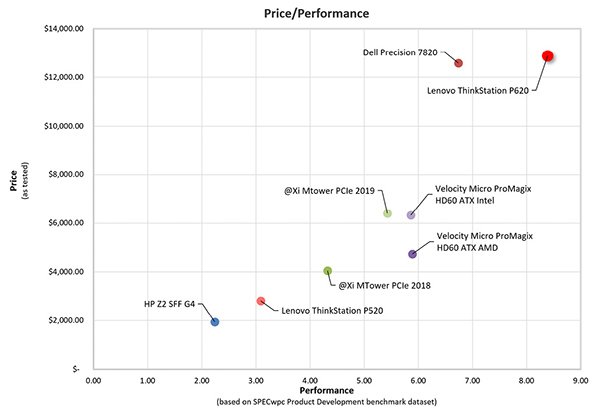 In addition to the 4.0GHz 12-core AMD Ryzen Threadripper Pro 3945WX included in the base configuration, you can choose any of the other three CPUs in the new AMD Threadripper Pro WX series. Just be prepared for some sticker shock.

The 3.9GHz 16-core 3955WX adds $1,010, while the AMD Ryzen Threadripper Pro 3995WX in the system we received added a whopping $10,675, before discounts (see sidebar). That processor has a 2.7GHz base frequency and a maximum single-core boost speed of 4.2GHz. It features 64 cores for a total of 128 threads—which actually makes it a cost-effective alternative to dual-socket systems—and a total L3 cache of 256MB. All four Threadripper Pro WX processors have a thermal design power (TDP) rating of 280 watts.

The motherboard in the P620 provides six PCIe Gen 4 expansion slots, two X8 and four X16. Lenovo offers a choice of 11 different GPUs, ranging from the NVIDIA Quadro P620 in the base configuration to the NVIDIA Quadro GV100. Choices even include several AMD Radeon Pro graphics boards. The four X16 slots means that the ThinkStation P620 can accommodate up to four NVIDIA RTX 4000 GPUs or up to two RTX 8000 boards.

Our evaluation unit came with a single NVIDIA Quadro RTX 6000 GPU with 24GB of dedicated GDDR6 memory. With 4,608 compute unified device architecture cores, 576 Tensor cores and 72 RT cores, the 384-bit interface delivers a bandwidth of 672 GB/second while consuming 295 watts. That board increased the cost by an additional $7,195, again before applying any discounts.

The ThinkStation P620 can be equipped with up to two M.2 drives plus up to four SATA drives. Lenovo offers a choice of solid-state OPAL drives ranging from 256GB to 2TB as well as 7200rpm SATA drives from 1TB to 4TB capacities, enabling the P620 to support up to 20TB of storage. Matched pairs of drives can also be configured in RAID arrays. Our evaluation unit came with a single Western Digital 512GB M.2 Gen 3 PCIe solid-state drive, which added $390.

With its massive number of CPU cores and ultra-high-end GPU, we expected the Lenovo ThinkStation P620 to deliver optimum performance, and it definitely delivered. On the SPECviewperf benchmark, which focuses solely on graphic performance, the P620 equipped with an NVIDIA Quadro RTX 6000 scored at or near the top on every dataset.

Although the Intel-based system from Velocity Micro that we reviewed last year beat the Lenovo workstation on some individual tests, overall, the Lenovo ThinkStation P620 was the clear winner. Its test results were also quite good on the SPECapc SolidWorks benchmark, but here the overclocked eight-core Intel CPU in the Velocity Micro workstation gave it a distinct edge.

On the very demanding SPECwpc workstation performance benchmark, however, there was no contest. The Lenovo ThinkStation P620 delivered the top scores on the majority of the individual tests, often by a very wide margin. It also garnered the best subsystem results for all but storage.

And on our AutoCAD rendering test, where the advantage goes to systems with fast, multi-core CPUs, the ThinkStation P620 averaged 25 seconds, a mere 1.2 seconds behind the @Xi MTower PCIe, which still holds the record on this test.

Lenovo preloaded Windows 10 Professional. Ubuntu is also available and Red Hat Enterprise Linux 8.3 is supported. The system comes with a three-year warranty that covers parts and labor and includes Lenovo Premier Support with next-business day onsite labor and parts prioritization. Warranty coverage can be extended for up to five years.

As configured, the ThinkStation P620 we received priced out at $12,878 after discounts. Although its performance places it firmly at the head of the pack, its price also makes the P620 the most expensive single-socket workstation we have ever tested.

That price likely precludes this Lenovo workstation from consideration for all but the most demanding applications. But for analysis and simulation, the Lenovo ThinkStation P620 may be the perfect solution.

We have always noted that the actual cost of a Lenovo workstation gets reduced after applying whatever discount is available at the time of purchase. We never thought much about that statement, however, until reviewing the new ThinkStation P620.

As you read through the review, if you add the additional cost for each upgraded component, the total cost of the ThinkStation P620 we reviewed comes to $22,211. But after applying a $9,333 discount, the final purchase price is $12,878. What’s up with that?

Pricing on the Lenovo website can be confusing, with all costs subsequently reduced after applying a coupon code. Click here for full-size image.

It appears that Lenovo’s sales department has taken buyer psychology to a new level. The discount—only available if you buy now and enter the special coupon code in the cart at checkout—makes it look like the purchaser is getting a great deal that may not be available if they wait too long.

In reality, it appears that Lenovo may be inflating the initial add-on cost, and then reducing it at the time of purchase, but only if the buyer enters the proper code. Those who neglect to enter that code—there will likely be some—pay full price. And the math itself can get very confusing.

For example, Lenovo states that the ThinkStation P620 starts at $2,099, but that is after applying a $1,520 discount. On the big-ticket items, the before and after price is even more glaring. The NVIDIA Quadro RTX 6000 GPU in the system we received added $7,195 (which on the Lenovo website appears to be a discount from a $8,220 initial price), while the top-of-the-line AMD Ryzen Threadripper Pro 3995WX CPU increased the system cost by $10,675 (rather than $12,200, which appears in a smaller font below with a line through it). Those two components alone total $17,870 before the discount code is applied.

But as a quick online search reveals, you can purchase that same graphics board from numerous vendors for around $4,300, and the AMD Threadripper Pro 3995WX has a suggested retail price of $5,489.

On the Lenovo website, when we configured our own ThinkStation P620 and added the 3995WX CPU to the base configuration, it increased the as-configured price from $3,619 to $14,294. But then the discount brought it back down to $8,291.

Although that makes it look like the customer is saving $6,003 ($4,483 on the CPU and $1,520 on the rest of the workstation), in reality you would still be paying $703 more than the manufacturer’s retail price for that CPU. But even that is a bit misleading, because the base system price already includes a Threadripper Pro 3945WX, which has a retail price of $2,385. So, you would actually be paying $3,088 over the retail price of that CPU.

The situation is not the same for the GPU, however. The upgrade from the NVIDIA Quadro P620 in the base configuration to the RTX 6000 we received added $7,195 to the system cost. The discount then reduced the purchase price by $3,022, resulting in $4,173 to upgrade from the Quadro P620 to the RXT 6000. But since the base price already included the Quadro P620 (which retails for $190), you would actually be paying $4,363 for the RTX 6000, nearly matching the GPU’s suggested retail price.

This numbers game is certainly confusing and requires a bit too much detective work to figure out how much each upgrade actually costs.

Making the Case for Mobile Engineering Workstations
This new Making the Case paper explains how mobile engineering workstations from Lenovo can improve performance for engineers on the go.
A Golden Age of GPUs for Design Engineering
How far can GPU acceleration go in enhancing design and simulation applications?
Product Focus: Design & Simulation Workstation Review Roundup
In this Special Focus Issue, our writers take a look at new technology trends in the workstation space. We have also gathered all of the workstation reviews we have published over the past year to help our readers select the...
Lenovo ThinkPad P15 Gen 1: A High-End Price/Performance Leader
Lenovo’s new 15-in. mobile workstation offers Ultra Performance Mode.
Match the Workstation to the Workload
As engineers return to the office, many firms are re-evaluating their computing requirements.
AMD Brings Power of Zen 3 to Mobile Processors for Business
Business notebooks from HP and Lenovo powered by AMD Ryzen PRO 5000 Series Mobile Processors provide performance and enterprise-class security solutions to meet demands of the workforce.
Lenovo Company Profile