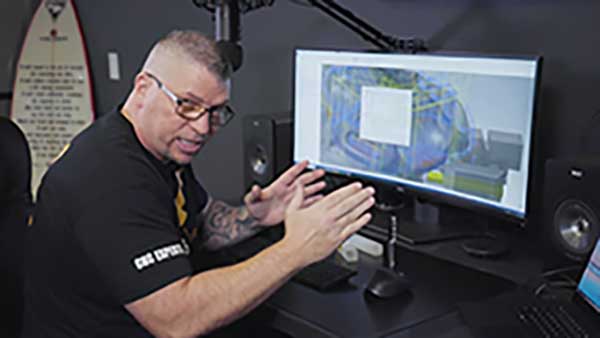 Mastercam, developed by CNC Software, Inc., is the featured CAD/CAM software in TITANS of CNC Aerospace Academy, which just launched Monday, June 29, to help train the next generation of highly skilled CNC machinists and eliminate the widening skills gap.

Mastercam is a CAD/CAM software. It is the most widely used CAM in industry and education worldwide. The software is popularly used in companies requiring precision machining, such as shops in the automotive and aerospace industries.

TITANS of CNC Aerospace Academy is a project-based platform teaching high-level manufacturers the skills necessary to produce complex aerospace parts using the most difficult materials. TITANS of CNC, Inc. CEO Titan Gilroy and his team have worked to create the Aerospace Academy as a platform to highlight aerospace machining and processes, that gives users an inside look at the entire process of manufacturing complex, hard-to-machine parts, that are realistic to the industry. Mastercam is featured throughout the platform and content and is being used to produce the majority of the aerospace projects which live on the free Aerospace Academy website.

“When we set out to build the game-changing Aerospace Academy, we knew from the outset that Mastercam was the only choice for a high-level CAM partner,” says Gilroy. “Just as our real-part inspired projects challenge users even at the highest level of programming, Mastercam is the greatest software, jam-packed with all of the tools manufacturers need to compete across all industries and meet the tough challenges and ITAR requirements. The Aerospace Academy is the next level of CNC education that will make a huge impact through the entire industry.”

TITANS of CNC will use Mastercam to produce additional aerospace tutorials, which will live on the FREE Aerospace Academy website. In addition, they will be recreating their Rocket Series, Building Blocks Series, and The Art of Fixturing Series using Mastercam.