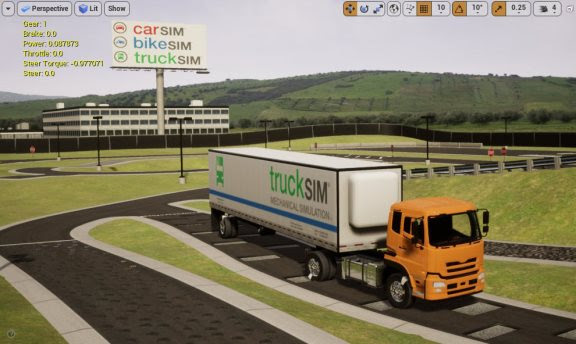 Mechanical Simulation has released the 2019.0 versions of the vehicle simulation tools CarSim, TruckSim and BikeSim, and the suspension simulation tool SuspensionSim.

The VehicleSim products CarSim, TruckSim, and BikeSim have featured high-fidelity math models for vehicle dynamics that can reproduce physical test results. The math models run to support real-time simulation with hardware in the loop and can support massive optimization projects involving hundreds of thousands of simulated conditions, the company reports.

As with past upgrades, the newest versions of the vehicle models have significant new features. Version 2019.0 includes built-in support for hybrid powertrains, importing OpenDRIVE road networks, support for the Michelin TameTire model, a built-in electronic stability controller (ESC), an engineering quality plug-in for the Unreal Engine and improvements in existing built-in controllers and programming options.

“With the increasing use of the advanced controllers for ADAS and autonomous driving, simulation is used in increasingly complicated scenarios,” says Dr. Michael Sayers, CEO and chief technology officer. “Simulations increased vehicle population, operating under more complex conditions and including more interactions with pedestrians and other vehicles.”

In light of this, recent releases have introduced major new capabilities for building scenarios and providing more realistic video visualization in support of on-board cameras and other sensors. The simulation tools include built-in sensors and target objects that can be used to represent traffic vehicles, pedestrians, bicyclists, traffic signs and signals, buildings, and any other type of object that is needed to simulate a scenario of interest.

Sayers notes that “two new types of objects were introduced to simplify the creation of scenarios with traffic signs, curved walls along the roadside, and irregular shaped objects.” New options were added for specifying motions of traffic vehicles with acceleration control to provide built-in physics needed to simulate more complex interactions.

A new interface called VS Terrain API connects any model from CarSim, TruckSim, or BikeSim with ground data from external software, such as mesh data files based on extensive measurements made with LIDAR systems. Another component, VS Connect, has been updated to connect VehicleSim models to multiple external environments simultaneously, such as a 3D world handled by Unreal and vehicle controllers running in Simulink.

About Mechanical Simulation Corporation: Mechanical Simulation Corporation is a technology leader in the development and distribution of advanced software used to simulate vehicle performance under a wide variety of conditions. The company was established in 1996, and from its Ann Arbor, Mich., headquarters provides car, truck and motorcycle simulation packages, training and ongoing support to more than 90 OEMs and Tier 1 suppliers, and over 160 universities and government research groups worldwide. For more information, please visit www.carsim.com.