This growth includes expansion into markets where printing on-demand parts and components is attractive, such as healthcare, aerospace and automotive.

This growth includes expansion into markets where printing on-demand parts and components is attractive, such as healthcare, aerospace and automotive. 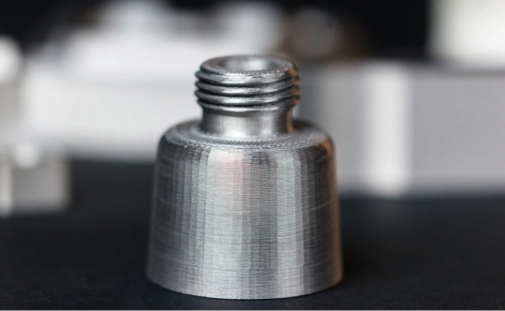 Exterior of a hardened nozzle printed out of H13 tool steel on the Markforged Metal X, straight out of the sinter, with no post-processing, according to the company. Image courtesy of Markforged.

The market for 3D metal printing is expanding. IDTechEx predicts that the global market for 3D printing metals will reach $12 billion by 2028, as more companies turn to additive manufacturing to create production parts in the automotive, aerospace and other industries.

Giants such as HP and GE have launched large-scale metal printing efforts, but other companies have focused on smaller units that can be used for design and prototyping, as well as low-volume runs of metal production parts, tooling and molds.

“Metal printing has been one of the best growth stories in 3D printing, and I think that is because current powder bed technologies are uniquely suited for advanced manufacturing,” says Kevin McAlea, executive vice president and chief operating officer, Healthcare, at 3D Systems. “We can process standard alloys and achieve excellent properties and address some key opportunities very effectively.” 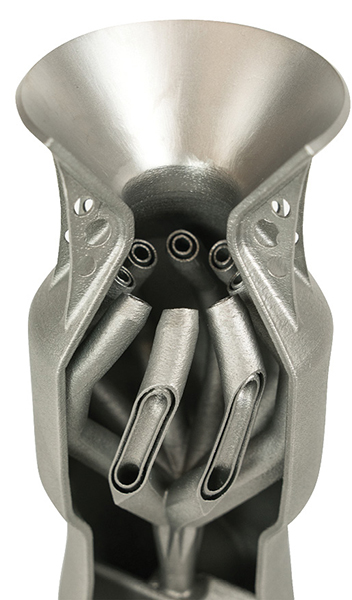 That includes expansion into markets where the ability to print on-demand parts and is especially attractive, including in the healthcare space where an increasing number of medical devices are being printed. “Medical device companies I’ve spoken to at high levels think that 10% to 20% of medical devices can be 3D printed. That’s an enormous opportunity,” McAlea says.

The number of applications that can take advantage of short-run metal printing is increasing as new materials become available. Desktop Metal recently released 316L stainless steel for its low-volume 3D metal printing systems, and a number of customers are already using the material with Desktop Metal’s Studio System.

John Zink Hamworthy Combustion is using it to make a combustion fuel nozzle for marine tankers, as well as customized ring splints for medical applications. Another customer used the material to print a steel impeller for a pump, reducing the cost from $1,000 to just $70.

“With every new technology we bring to market and every material we produce, we see exponential growth in the range of applications that customers can use our systems for,” says Andrew de Geofroy, vice president of application engineering and professional services at Markforged.

The jewelry industry is also embracing these smaller metal printers to create molds and finished pieces, and there is an emerging opportunity in the parts aftermarket for heavy equipment, machinery, automotive and aerospace, because companies can more easily produce short runs of obsolete parts. 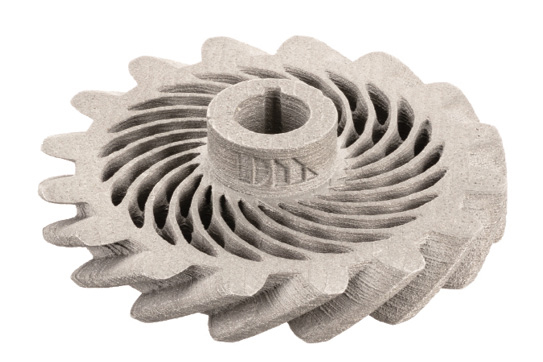 Desktop Metal’s Production System metal 3D printer is capable of customizing batches of generative designed gears at varying amounts with mass production efficiency (top). The spauger bit (bottom), is an example of simplified manufacturing for complex metal parts made possible by the Production System, according to the company. Images courtesy of Desktop Metal.

“With legacy equipment in the field, you often end up having to do low-volume replacement part runs that end up costing a lot of money,” says de Geofroy. “Customers are interested in making on-demand replacement parts, because they won’t have the carrying cost of inventory or have to create new tooling or change over production lines.”

Space is also an issue for organizations that have a large part catalog. “There are these huge warehouses full of shelves of tooling, and if they need a part, they pull out the tooling and stamp out parts,” adds Jonah Myerberg, chief technology officer of Desktop Metal. “We’re seeing a shift away from that kind of traditional factory and toward a digital factory that uses software to make the parts on demand. They are never obsolete and they don’t take up any space.”

Early adopter markets are also increasing their investments in these systems. “Aerospace and other related segments are also becoming major adopters of 3D printing,” McAlea says. “They are focused primarily on weight reduction and enhanced performance via redesign of parts, and they are a great fit for what we do today.”

Metal Printing on the Factory Floor

With improvements in the printers, new materials and greater acceptance of 3D printing in general, there is more overlap between prototyping and production systems, and demand to use metal printers on the factory floor.

Decentralized manufacturing, which focuses on the last mile of manufacturing rather than establishing a lengthy, expensive supply chain, will increase printer adoption and use.

“Now you can print a part anywhere in the world, on demand, where it’s needed,” de Geofroy says. “Because our software is cloud based, customers can have a centralized design group and print a part all the way around the world in a factory that needs it, and the person in the factory can take that part off the printer without having any specialized design expertise in that location.” 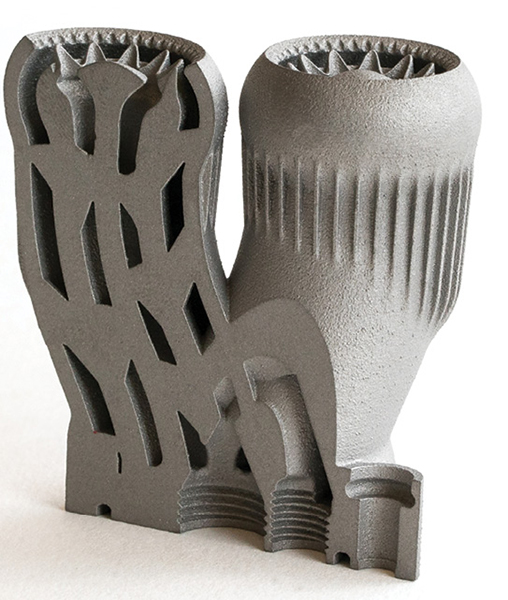 There are still quite a few adoption hurdles. Speed and build volume must increase to make these printers useful for more applications, and there are still gaps in material availability.

“There are also barriers around safety,” de Geofroy says. “With our Metal X printer, we’ve tried to make sure we didn’t need a clean room and a respirator to operate it. That has a huge impact on viability of using the machines in the first place.”

Metal printing also usually requires a fair amount of post-processing, including additional machining, washing and other types of finishing procedures.

“People don’t always understand that if they print this part to cost-effectively produce a shape or structure that wasn’t otherwise possible, the part that comes out does need to be post-processed. That can include everything from acid etching to hand finishing to post-machining,” McAlea says.

3D Systems and other companies in the sector are working on ways to automate more post-processing workflows.

“One of our objectives is to better integrate 3D printing with other processes that are essential to creating the final part. That was part of the objective we had in partnering with Georg Fischer AG GF Machining Solutions,” McAlea says. “We have a clamping system in the printer to move the part seamlessly to the post-machining operation. There is a lot of interest in how you integrate additive and subtractive in a way that makes them seamless and as easy to use.”

The market also needs education about what types of parts are best suited to metal printing, and how to design for 3D printing. “We also encounter customers who don’t understand when it makes sense to 3D print a part, and when it doesn’t,” McAlea says. “We receive part files that we could, in principle, print. But you have to ask why. They could be produced more economically through alternate technologies. The advantages of design that are inherent in 3D printing and its limitations are still not well understood.”

“That’s really the first question companies and designers need to ask,” Myerberg says. “Is this a good part for printing? At the end of the day, 3D printing is another tool that engineers have to design around to put a part into mass production.”

Companies often want to print existing parts, but they often need substantial redesigns to be optimized for 3D printing. “There are design rules, just like for other manufacturing processes, that you have to follow,” Myerberg says.

Specific vertical markets also have requirements to consider when developing a part for additive manufacturing. “People have underestimated the challenge of bringing 3D printers into a certified or validated operating environment like medical or aerospace. There are still difficulties in doing that,” McAlea says.

It appears that upcoming innovations in metal printing, according to companies interviewed for this article, will focus on speed, larger build envelopes and materials.

“With laser-based printers, we will continue to see improvements in speed and workflow, which will drive down part costs. I think we will see widespread factory adoption of these printers, and we’re starting to see that already,” McAlea says.

“We are just at parity with other technologies, and as we increase speed and reduce the cost of materials, we can operate more efficiently than die casting or stamping,” Myerberg adds.

For example, Aurora Lab’s RMP1 machine, which launches soon for beta customers, could have a production rate of 30 kilos per hour. The company’s proposed Alpha 1 printer is supposed to be capable of printing 1,000 kg per day.

Myerberg also expects an evolution in materials. “Customers want to print a lot of stainless steel, and other materials are coming along too,” he says.

All of these improvements will drive down the cost of part production and increase adoption. “The cost to produce a part will fall to the point where I think we’ll see more 3D printing, and it will be the most cost-efficient way to produce many parts,” de Geofroy says.

Markforged worked with Stanley Black & Decker to redesign some components that provided both significant weight and cost reductions. The company used the Metal X printer to create the actuator housing for Black & Decker’s PD45 Hydraulic Post Driver and a wheel shaft for its PG10 grinder. The part’s housing was resigned from four components to one, making it 53% lighter and cutting lead times by 95%. The new part was 12.5 times less expensive than machining and costs for a single component were reduced by 92%, according to the company.

However, both printer manufacturers and end users will need to close a looming skills gap regarding 3D printing in metal.

“Do we have the people who are trained to leverage this technology?” de Geofroy says. “Our customers are worried about staying ahead of the competition and attracting the right talent. There are students now with first-hand experience in 3D printing, and they don’t want to work for companies that aren’t leveraging the technology.”