Immersive 3D experiences touted as the foundation of a new kind of collaboration.

Traditional analysis results from FEA programs are easily understandable among engineers. However, photorealistic renderings of crash simulation results represent a new way to collaborate with those outside engineering. Images courtesy of Dassault Systemes.

Traditional analysis results from FEA programs are easily understandable among engineers. However, photorealistic renderings of crash simulation results represent a new way to collaborate with those outside engineering. Images courtesy of Dassault Systemes.

If you want to know what it feels like to be an astronaut inside a space capsule, here’s a tip from David Markham, vice president of Advance Programs at Lockheed Martin Space Systems. “Put on your oven mitts and try to operate your TV remote control,” he suggests.

That’s an inexpensive way to mimic what Lockheed Martin engineers do with their test subjects in the Human Immersive Laboratory, or “the dunk tank,” as Markham calls it. The lab incorporates head-mounted displays, motion-capture technology and haptic gloves. By observing prospective space travelers’ behavior in the dunk tank and listening to their complaints, Markham and his colleagues gain valuable design insights they might otherwise overlook in the design process.

“The dashboard inside [the space capsule] had to be operated while you’re wearing massive gloves,” Markham said. “Imagine your fingers are about four times the normal size, and you have to push the switches on that dashboard. Even if you knew what to push, you couldn’t, because your fingers were too big.” That’s the type of potentially costly errors digital simulation alone won’t reveal, but an immersive experience would.

Markham was speaking to the audience at the 3DEXPERIENCE Forum (Nov. 11-12, 2014, Las Vegas). Dassault Systemes, the host of the event, also happens to maintain several immersive environments, known as VR Caves. The type of lifelike simulation possible in those virtual environments offers clues to the principle that underlies Dassault’s approach to collaborative product development. The rich, reality-mimicking digital experiences are at the heart of its 3DEXPERIENCE.

Dassault Systemes brands like CATIA and ENOVIA are well established in aerospace and automotive. With the acquisition of MatrixOne in 2006, Dassault Systemes tiptoed into fashion and apparel. With the more recent purchase of Accelrys in June 2014, Dassault Systemes significantly accelerated its activities in the life science and consumer packaged goods sector. The company’s expansion into new markets had a profound impact on the character of its software offerings.

In classic manufacturing, tech-savvy engineers and designers are the primary decision makers at the center of the product development universe. In the new markets Dassault Systemes is courting, the end users—the consumers—play a critical role. Their preferences are part of the feedback loop in the iterative design process. They show a willingness to pay extra for a good experience, defined by the convenience of ordering online, customization options and available add-ons. Rich multimedia content pumped out in social media outlets have a better chance of attracting those who cater to the fashionistas. Immersive 3D visuals augmented with stereoscopic hardware could facilitate a straightforward discussion with a heart surgeon the way CAD models couldn’t. So Dassault Systemes decided lifelike experiences must be the lingua franca of its universe. 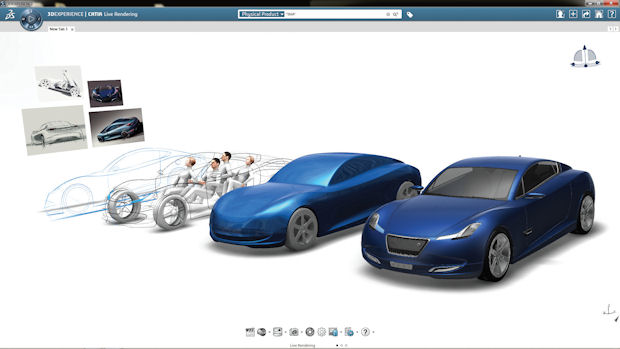 The watershed moment came in 2013, when the company renamed its annual customer conference as 3DEXPERIENCE Forum, and rebranded CATIA, DELMIA, ENOVIA and other titles as part of its 3DEXPERIENCE platform. “This is about looking at the world in a different way, a different perspective, looking at it from the future … Welcome to the world of experiences,” said Bernard Charles, CEO, Dassault Systemes, at the forum.

In CATIA V6, Dassault Systemes introduced a new sketching tool called CATIA Natural Sketch. The application is specifically developed for the tablet-stylus combo. The sketching mode replicates the experience of drawing on paper. The hand-drawn 2D sketch can easily be transformed into 3D volumes, ready for further development in CAD. At the same time, the application also lets you sketch directly on 3D surfaces, which is especially useful for industrial designers who work with complex surfaces and organic shapes.

The stylus-friendly Natural Sketch anticipates the popularity of mobile tablets powerful enough for professional usage, such as Microsoft Surface Pro. And 3DEXPERIENCE’s cloud-centric architecture lets you easily share the data or launch an online session to discuss the concepts with remote collaborators.

Part of product development is surveying the competitive landscape, scouting out what rivals are developing for the same market segment. To capture the general vibe for a product, you may use Dassault Systemes’ Netvibes Dashboard Intelligence, which searches and aggregates information for your product, be it a washing machine or a new sports utility vehicle.

Acquired by Dassault Systemes in February 2012, Netvibes culls data from news groups, user forums, social media feeds and corporate archives—a combination of public and private sources—to provide guidance for product designers. The intelligence you gather could include online chatter about your competitors’ products currently in development.

Consumers as a Resource

Perfect Shelf, an industry experience from Dassault Systemes Consumer Packages Goods (CPG) group, is a good example of the kind of solution developed for delivering products and an experience. The underlying 3D modeling technology also powers Dassault Systemes CATIA, used by engineers from Boeing and BMW, but you won’t get any hint of the plant floors and assembly lines in Perfect Shelf. In a drag-and-drop interface, Perfect Shelf lets store display designers assemble and populate virtual retail displays using ready-made 3D content. That makes constructing 3D models of shelves stuffed with shampoo bottles and cosmetics easy enough for someone who has never used a CAD program.

“CPG brand manufacturers and retailers can imagine and quickly deliver superior shopping experiences … It transforms the way they collaborate and innovate—for and with consumers,” says Marc Truffault, director, Solution Experience for CPG.

Traditionally, simulation results are meant to be shared, viewed, and critiqued among advanced automotive engineers; therefore, the crude mesh models with color-coded stress distribution and displacement regions are more than enough. But such engineering-focused visuals may not adequately convey the severity of the problem or the nuances in the design flaws when communicating with those outside engineering.

Is it a good idea to produce crash simulation results as photorealistic animations and high-resolution renderings? (The simulation uses 3D models of test dummies, so there’s no blood and gore.) RTT, now 3DEXCITE, a high-end visualization solution supplier acquired by Dassault Systemes in May 2014, is certain that’s the way to collaborate with stakeholders who are not engineers and won’t easily be convinced by typical analysis screenshots. It came up with DELTAGEN Real Impact, a product that made an impact on the Crash Safety Group of Honda R&D Americas Inc.

Describing its work with Honda, 3DEXCITE says it enables “Honda engineers to quickly produce visually stunning and credible imagery from 3D simulation results with little effort, allowing them to communicate complex structural analysis results in an intuitive way.” The software, according to 3DEXCITE, uses “a custom LS-DYNA translator and assemblies in DELTAGEN. Using the system, Honda can rotate the view of the simulation, strip away parts and isolate a component for closer analysis. Additionally, both real-time interaction of simulation states, as well as production of offline movies of the complete crash sequence are possible.”

Immersion with Some Limits

True immersive reality—one that’s virtually indistinguishable from reality itself—is a tall order, perhaps a utopian concept better left to science fiction. Immersive caves, or sophisticated virtual reality rooms, are a reality today; however, the cost remains prohibitive for many. Immersive experiences add a new dimension to the collaborative workflow, but those without the budget of Lockheed Martin may have to be content with limited immersion.

For some, it might mean a creative tabletop setup that combines stereoscopic display and special eyewear, like the zSpace running Dassault Systemes’ CATIA software. For others, facilitating the virtual walk-through of a 3D store model that replicates the real retail store’s look and feel might be sufficient. These lifelike experiences, even if constrained by cost and space, are essential in the type of collaboration that involves customers and consumers outside engineering.

“Spending time watching your customers in these immersive environments, and listening to what they say—listening to their ‘I wish I had’ and ‘I wish I could,’ ” says Markham, is the best way to develop a product that meets their expectations.