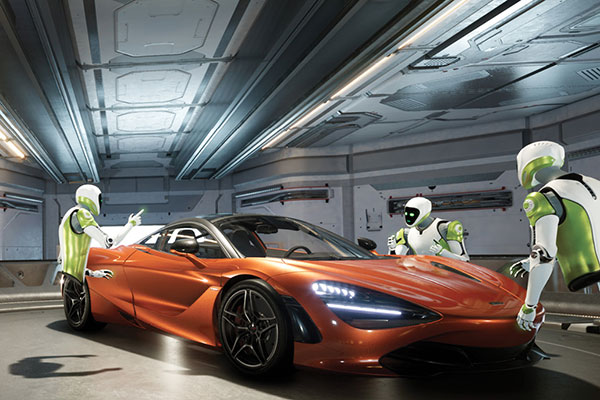 GPU maker NVIDIA and other hardware makers identify collaboration as a key area where VR can add value. Shown here is NVIDIA Holodeck, a VR environment for engineering collaboration. Image courtesy of NVIDIA.

As the 2019 Christmas season approached, the VRX Conference in San Francisco kicked off at the Hyatt Regency. One panel tackled the question, “Are investors done with XR [extended reality]?”

The panelists’ pragmatic approach to investment assessment suggests the industry is no longer enamored by augmented reality and virtual reality (AR/VR) as novelty items. For better or worse, the hype is beginning to wear off. The technology must now face difficult questions about its own sustainability, scalability and the value it offers.

“We want to make sure [the firm we invest in] has a first-generation product, something tangible to test, so we know they have the technical prowess to make a product and understand the problem they’re trying to solve,” says Amy LaMeyer, partner, WXR Fund.

“Ideas are a dime a dozen; it’s all about execution,” says Tipatat Chennavasin, co-founder and general partner, The VR Fund. “We also ask if the idea is venture-scalable. There are some companies with great ideas, but they’re not venture-scalable. In that case, we say they’re better off bootstrapping or looking for angel investors.”

“Take VR out of your pitch. What problem are you solving? VR is just one of the mechanisms to solve that problem; you don’t need to define yourself as a VR company,” notes Maddie Callander, VR Accelerator & Portfolio, Boost VC.

A week before the VRX Conference, Qualcomm announced its Snapdragon 765 mobile processors that support 5G connectivity and artificial intelligence workloads. This has some implications in the development of untethered or cordless XR devices.

It’s not yet feasible to fit workstation-class CPUs and graphics processing units (GPUs) into a head-mounted display (HMD), along with the necessary power source to support them; doing so would increase the device’s weight significantly, discouraging users from wearing it for long periods. Therefore, many XR devices are powered by an external source, usually a workstation, via a cord. The less-than-perfect solution introduces navigation issues, such as wire entanglement and risk of tripping.

“There are some use cases that will always necessitate super high-fidelity content that requires high-end PC/workstation performance that mobile silicon can’t compete with, but at the same time there’s significant usage that sits below that processing requirement,” says Eric Abbruzzese, research director of AR/VR, ABI Research.

“Of course, one caveat is [original equipment manufacturers] need to actually adopt and leverage the new silicon to reap the benefits. New devices often lag a couple generations behind the latest chipsets, and in the AR-VR space some have opted to leverage the standard Snapdragon line rather than the XR line,” he adds.

Different Strategies for AR and VR

The fundamental difference between AR and VR is that in AR, digital objects coexist with reality. In VR, the world is completely virtual. For this reason, they are positioned to address different problems.

“VR is a great way for engineers to clearly visualize designs at scale. The value increases when you use VR for a collaborative project review with globally dispersed participants. You gain unique visualization perspectives,” notes Chad Jackson, chief analyst and CEO, Lifecycle Insights.

The acronyms for AR and VR, often used interchangeably by many outside the industry, may be confusing. They warrant some differentiation.

AR means augmented reality. In an AR system, you do not lose sight of the real world around you. Your reality is merely enhanced with a layer of digital data. In other words, you can still see the tables, chairs, and walls around you, but you may also see a virtual vehicle that’s not really there.

VR means virtual reality. When using a VR system, you enter an immersive virtual world. Therefore, you can no longer see the physical objects around you. VR head-mounted displays (HMDs) generally do not come with see-through glasses; they block off your eyesight completely.

XR and MR (extended reality and mixed reality) have now become general terms that encompass AR and VR. However, some argue the terms should more narrowly be applied to AR because they suggest mixing or fusing reality with digital data. In this article, they refer to the collective industry that includes AR as well as VR.

GPU maker NVIDIA has developed a VR-based collaborative environment called the NVIDIA Holodeck, targeting engineers and designers. One of its appeals is the ability to ingest detailed CAD models and display them in real-time raytraced mode.

“AR is uniquely applicable to the redesign of existing products. Engineers can overlay new designs onto physical products, visualizing fit, aesthetics, analysis results and a lot more. There’s nothing quite like seeing a new design on the top of an existing design in real, physical space,” Jackson adds.

Traditionally, engineers and design firms have turned to VR for a more virtual design process. AR is bringing new capabilities to end users. “AR is the newer kid on the block. Solution providers like PTC and AVEVA have been pushing AR for several years, and the big enterprise players have taken note and include it in their digital twin strategies,” observes Stan Przybylinski, vice president, CIMdata.

“When I think of AR, I think more of overlaying [Internet of Things] or other enterprise data on things that exist in the real world. Engineering can benefit from that as well, by seeing their designs in action while displaying key process indicators in real time. But the largest benefits to date have been in service and manufacturing,” Przybylinski also notes.

In VR training, while wearing a headset and sitting in a small cubicle, you can virtually be in an immersive airplane cockpit, surrounded by responsive real-time raytraced visuals that depict all the intricate dials and knobs. On the other hand, in AR-based maintenance and installation, you can see the real object that needs to be repaired, with an animated sequence showing the procedure.

Adoption during the hype cycle’s early phase is fraught with risks. In this phase, the technology remains unstable and mergers and acquisitions that will identify the leaders have not yet occurred. On the other hand, adoption during the later phase forces one to catch up.

“The hype cycle is mostly through on the enterprise side, now moving into scaling implementations,” says Abbruzzese. “The consumer market in regards to head-worn AR is (subjectively) pre-hype cycle and as a result very immature and so not really viable as an alternative for enterprises at this point; this is something that is guaranteed to change in the next few years, potentially as early as next year. Mobile AR is farther along and has helped spur some knowledge share and user understanding around AR before a possible head-worn growth spurt.”

“The technologies continue to evolve, with price points continually decreasing. There are no clear winners yet, but I do not think that companies can sit on the sideline waiting for a dominant player to emerge. Companies can pilot the technologies without making a huge commitment,” advises Przybylinski.

One option is to experiment with low-cost consumer devices until a clear use case is established. Another is to look for operations where high-fidelity VR can replace high-cost physical spaces (such as training facilities and equipment).

“If VR or AR solves a problem in a short period of time, then implement it. However, be very clear about the value you expect to reap from the investment. It is easy to get lost in the cool factor of these new technologies,” notes Jackson.