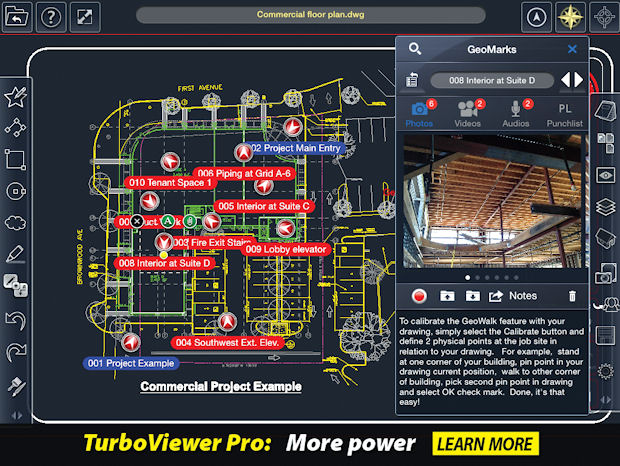 At the Deutsche Bank headquarters in Frankfurt, Germany, Thomas Prinzen and two of his colleagues are starting their work just as the bank staff is heading home. With glowing mobile tablets strapped to their arms, they walk around the bank, taking measurements of the rooms and walls. Throughout the process, each of them is accompanied by an armed guard—a standard security protocol. By the time they go home, it’s usually the wee hours of the morning.

Prinzen is part of the management circle of Graebert, best known for its ARES Commander CAD software. As director of Graebert’s iSurvey Division, Prinzen oversees and participates in survey projects that involve capturing as-built conditions of existing architecture and interiors, ranging from Scottish schools and historic churches to McDonald’s restaurants. In the case of Deutsche Bank, the Graebert iSurvey team has been asked to record the floor plans of the bank’s headquarters, along with accurate positions of the furniture. The resulting DWG drawings are expected to offer facility managers valuable insight.

For the Deutsche Bank project, Prinzen’s team uses Graebert’s SiteMaster software, available for Windows 8 tablets. The measurements they make with their Leica Disto laser devices go straight to the software. As they work through the evening, the DWG files automatically develop in response to their measurements.

Currently, the use of lightweight devices equipped with mobile CAD apps is still largely confined to viewing, markup and approvals. But the iSurvey team’s work is a harbinger to onsite work crews using lighter, nimbler mobile software and hardware to increase efficiency.

In the late 1990s, when executives started expressing interest in exchanging their leather-bound appointment books for shiny PalmPilots, some brave companies tried to put CAD (by today’s standard, a very limited function set) on those early personal devices. Cedric Desbordes, Graebert’s marketing executive, recalls, “Graebert’s first mobile CAD solution for Windows CE was released in the years 1999-2000 under the name FelixCAD Mobile. It was the first solution for Mobile CAD on Windows CE devices, and was later renamed PowerCAD CE.”

Graebert’s PowerCAD CE evolved into PowerCAD SiteMaster in 2003. “SiteMaster is now powered by ARES, and we recently released SiteMaster (Building Information Modeling, or BIM), adding the unique capability to export the 3D model of the building in IFC format for further modification with BIM software such as Autodesk Revit,” Desbordes says. “The next milestone is to migrate SiteMaster to Android OS using the ARES Touch engine.” 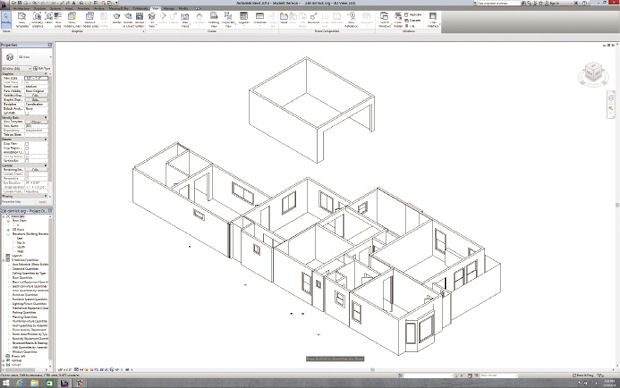 SiteMaster from Germany-based Graebert (shown here running on an iPad) is used with a custom tablet that can be worn around one’s wrist or waist for onsite measurements. Image courtesy of Graebert.

Desbordes says he believes engineers and designers won’t work exclusively in mobile devices. Instead, they’ll work in a “cross-device CAD experience,” switching to different devices as circumstances demand. For example, they may approve a change from their phone, gather measurements onsite with a mobile tablet, and edit the DWG file back in the office on a proper workstation.

Many mobile CAD apps are well tested and already established as an ideal way to view, annotate and share lightweight 3D files.

In cases where sharing 3D CAD assemblies may be overkill, users turn to mobile viewers like GstarCAD MC from China-based GstarCAD, eDrawings Mobile from SolidWorks, 3D VIA Mobile from Dassault Systemes, TurboViewer from IMSI/Design, iXVL Player from Lattice Technology, and others. Some of these apps offer a more robust version (usually called “Pro”), with enhanced markup tools or additional storage for a modest upgrade fee.

However, the idea to use a mobile app to create designs from scratch still remains a topic of debate among users. It’s a need not easily filled by remote desktop apps, because the touch-sensitive navigation employed by mobile devices demand a drastically different way of interacting with engineering drawings and 3D models. Mirroring or replication the desktop CAD program’s interface on a multi-touch device doesn’t usually offer a good user experience. The answer may rest with a newer crop of mobile apps, developed specifically to create designs from start to finish.

This workflow requires cloud storage, where the same project files and folders can be remotely accessed by several devices. According to Desbordes, “Sharing of projects for SiteMaster is currently done via email, but because the tablets run on Windows 8, it is also possible to install Dropbox or other cloud solutions, just like on your desktop. For ARES Touch, it will be possible to share files in the cloud using solutions such as Dropbox or Google Drive, and also by email. Of course, when SiteMaster migrates to ARES Touch, cloud sharing from the app will become available, too.”

In June, Graebert announced its plan to develop a 2D-3D hybrid CAD program for Android devices. The new product is based on Graebert’s ARES software, the engine behind Dassault Systemes’ DraftSight and Corel’s CorelCAD.

“By 2015, tablets will outsell PCs by a significant margin; as such, the importance of making the full ARES CAD experience available on mobile devices became a top development priority,” observes Wilfried Graebert, CEO and founder of Graebert. “By 2017, there will be five touch devices (smartphones + tablets) shipped for each PC, and we fully intend to be the go-to solution for handheld devices long before then.”

Graebert resellers are expected to offer bundled licensing in the near future: ARES Commander desktop license that offers ARES Touch, the mobile version, for free; and vice versa. At press time, the announcement was set to occur in Berlin, at the company’s annual October meeting, Desbordes reveals to DE.

For IMSI/Design, which develops and markets the TurboCAD product line, the mobile device users are not just a secondary market to augment its desktop users. The company considers this to be the future, worthy of investing in an entirely new ecosystem.

In 2012, during the release of the free TurboViewer SDK, IMSI/Design’s chairman and CEO Royal Farros said, “We are going to enable an entirely new generation of CAD developers, letting them create powerful, custom apps based on our TurboViewer series, the fastest 2D and 3D viewing platform in the mobile world. We think this can be a real game changer.”

If users show sufficient enthusiasm for the SDK and are willing to develop programs on top of the viewer, IMSI/Design wants to nurture a mini-marketplace, an online zone where people can trade and buy specialized TurboViewer-based apps.

Within its TurboApps product line, the company also offers TurboSite, developed specifically for mobile work crews in manufacturing plants, factories and construction sites that must produce instant punch lists and highly customized PDF field reports. Among its many features is geomarking, the ability to mark a physical object’s location using the mobile device’s location awareness. The app also lets users take advantage of the device’s built-in camera to attach galleries of photos, videos, dictations and text notes to a location to explain its relevance or importance.

Anuj Kumar, a final-year architecture student, uses ZWCAD Touch on his iPad. The app was developed by China-based ZWSoft, which also develops and markets the desktop Windows-based ZWCAD+, ZWCAD Mechanical, and ZWCAD Architecture. He notices, “Right now, people rarely think about checking CAD files on their mobile devices. Some of my friends are unaware that they can even open CAD files or modify them on Android phones or iPhones.”

ZWCAD and ZWCAD Touch both offer the ability to export DWG files, compatible with AutoCAD. That works well for Kumar, who uses AutoCAD 2014 and SketchUp on his desktop machine. Kumar says, “I think mobile CAD apps are a must-have for architects who are always visiting sites. While PDFs have helped me in past, CAD apps go much further; they create ultimate file-viewing experience on the move.”

Kumar notes that for now, mobile CAD apps are better suited for viewing, editing and markup—not quite there yet for design creation from scratch. Developers “should not try to replicate desktop experience,” he says. “They should realize most users will just be viewing or reviewing [on mobile devices].”

Replicating the desktop CAD program on a mobile device can now be done with apps like RemotePC (Android), Microsoft Remote Desktop (iOS), or Citrix’s ShareConnect (iOS and Android). After a few registration steps and plug-in downloads, you’ll find that you can remotely access your desktop machine, along with the CAD programs installed in it, from your mobile tablet or phone. But, to Kumar’s point, you’ll also find that it’s extremely awkward to duplicate your usual mouse-and-keyboard commands (like the click-and-drag operations or the right-mouse menu items) using the mobile device’s finger input.

The most promising use of mobile apps at the present appears to be for work crews in remote locations. But to make the mobile experience optimal, the developer must take into account how the intended user might use the program, and provide additional accessories if necessary.

“To measure buildings, we need to be extremely mobile—enough to be able to climb ladders, jump and down, and keep both hands free,” Graebert’s Prinzen points out. “You can’t do that with a laptop.” 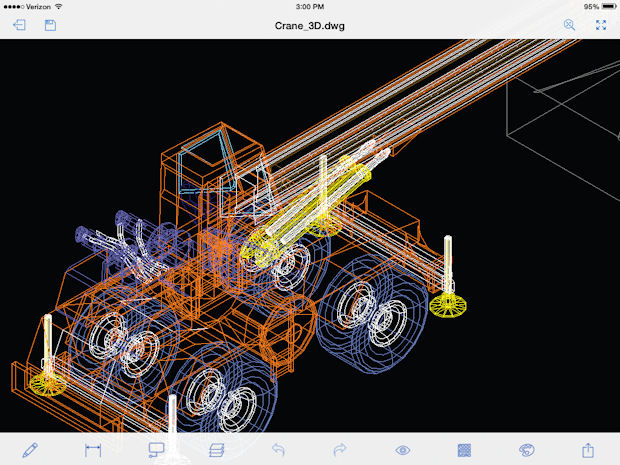 Desbordes provides more examples of app developed with specific industries and workflows in mind. He says, “Connecting a Bluetooth laser telemeter with CAD software on a tablet is helping kitchen designers take or check measurements onsite about twice as quickly, and to get very easily and quickly the 2D and 3D geometry of the room without CAD experience.”

Connecting Graebert’s Mobile CAD solution SiteMaster Kitchen with the kitchen design solution from German-based company Carat is bringing up to 70% more productivity, he adds: “Before that, the kitchen planners had to enter and update manually the geometry in Carat, and an error of even 1cm had heavy financial consequences.”

Moving Beyond Viewing and Markup

Perhaps one of the most robust mobile CAD apps in the market, and certainly one of the earliest to come out, is Autodesk’s AutoCAD WS (recently renamed AutoCAD 360). The mobile version, available for free, includes features that let users edit and annotate DWG files.

In theory, AutoCAD 360 and a few mobile apps offer enough tools to create and complete a drawing from start to finish. But currently, most mobile device users appear to rely on CAD apps only for fleeting, spontaneous operations such as change approval, minor edits, redlines and annotations.

This may be partly due to the entrenched mouse-and-keyboard computing behaviors that are inseparable from the widely adopted CAD programs, and partly due to engineers’ preference (sometimes for justifiable reasons, other times not) for a dedicated workstation and an environment free of distractions to do their primary design work. But in environments where a laptop is a burden and a desktop is nearly impossible to operate—such as on construction projects, survey sites or plant floors—mobile apps and mobile devices are breaking new ground.